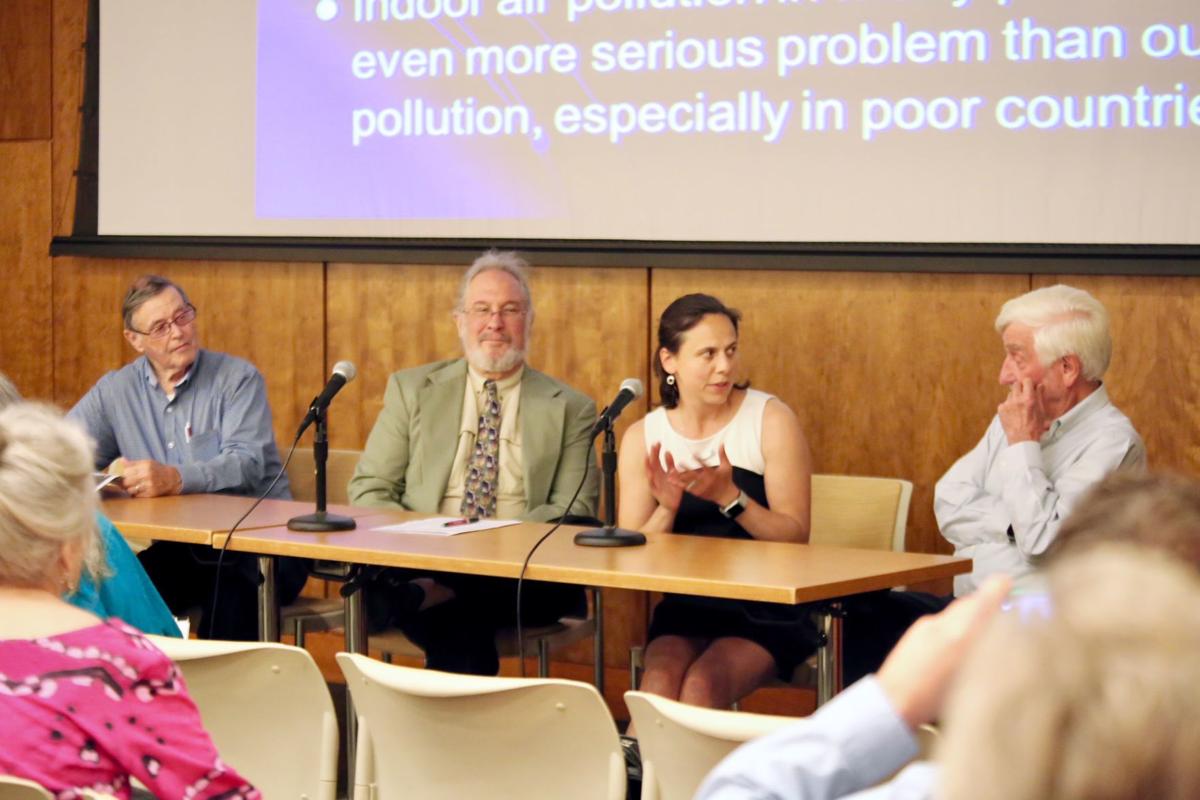 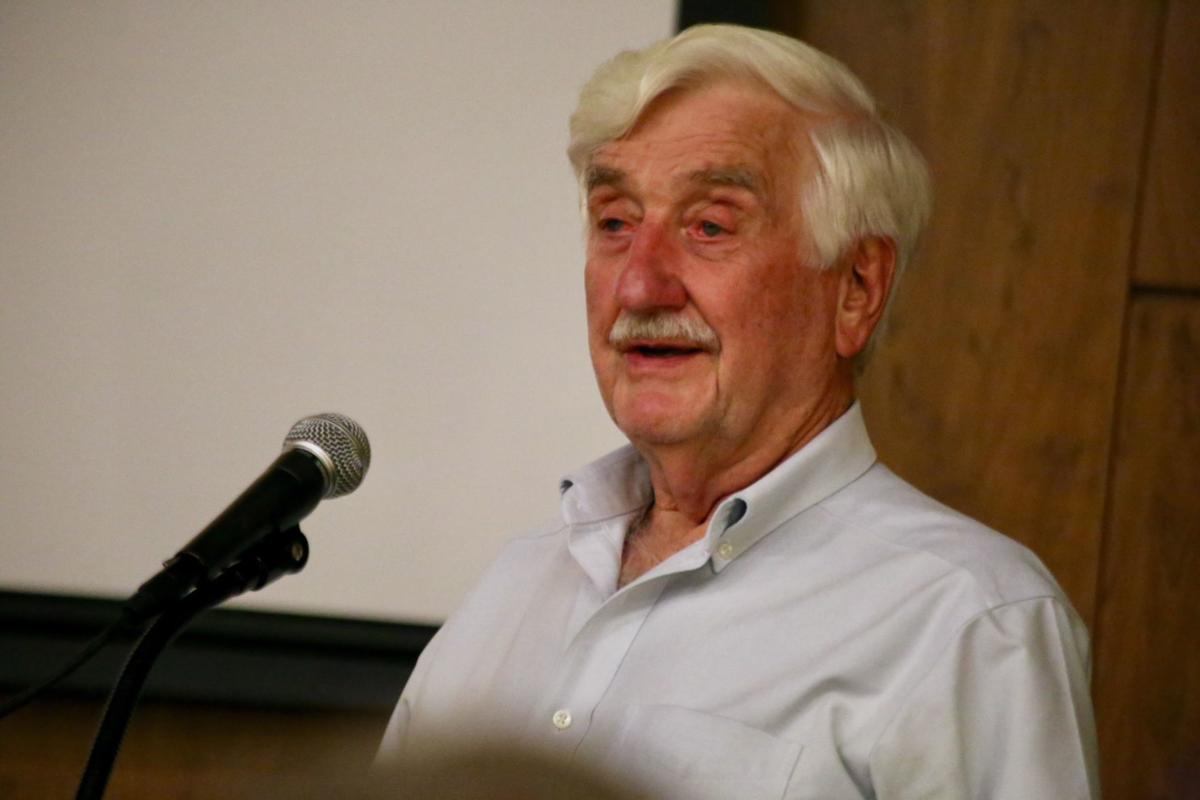 David Carpenter, head of the University of Albany’s Institute for Health and the Environment, speaks about air pollution Monday at Crandall Public Library in Glens Falls. 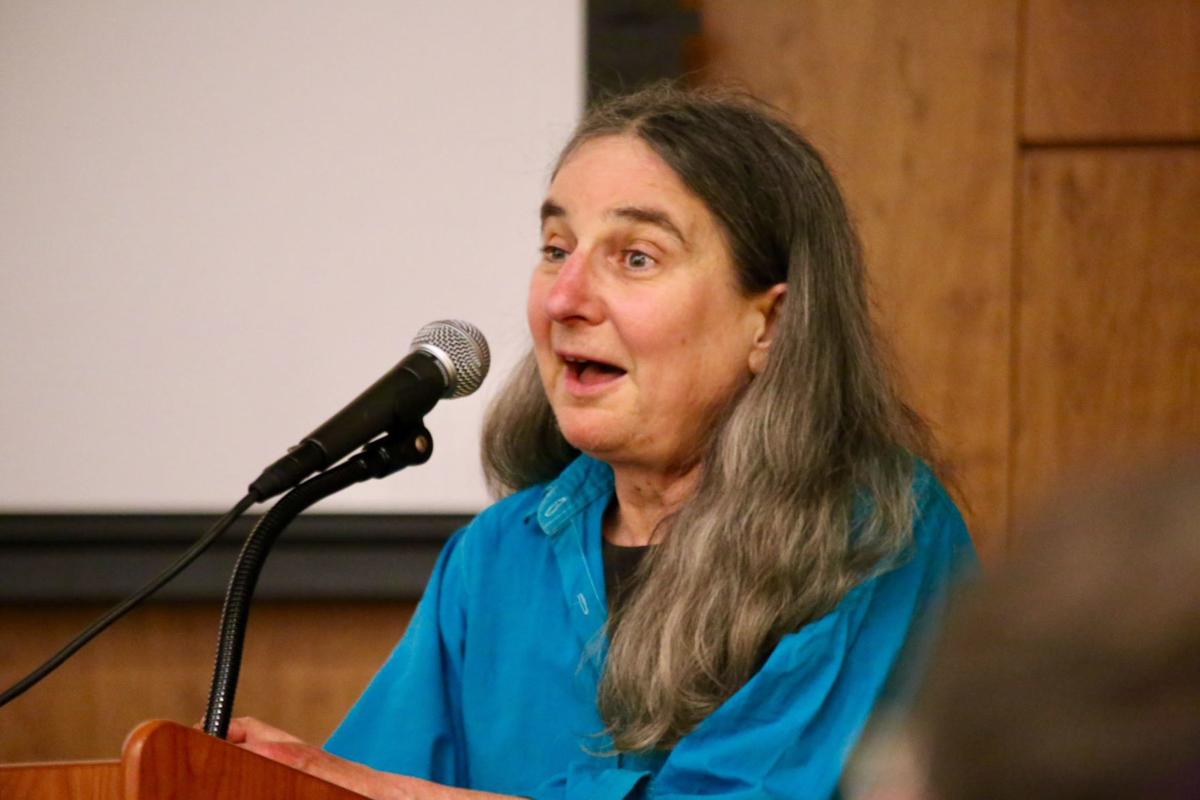 Tracy Frisch, founder of the Clean Air Action Network, kicks off a meeting about human health and air quality at Crandall Public Library in Glens Falls.

GLENS FALLS — Children living in the same zip code of a fuel-powered plant and a superfund site are more likely to be hospitalized for things like asthma, pneumonia and other respiratory infections, according to a study done in New York using hospital data from 1993-2008.

That describes a large portion of the Glens Falls region living along the Hudson River, considering the river is a superfund site and a number of industrial plants operate there.

David Carpenter, head of the University of Albany’s Institute for Health and the Environment, presented some of his findings Monday night at the Clean Air Action Network’s second public forum, “Air Quality and Human Health,” held at Crandall Public Library.

Carpenter said children are at much greater risk, because they breathe more rapidly than adults, their bodies are still growing and any damage done could be life-long.

Adults feel the effects, too.

While lung cancers and diseases also increase with more air pollution, Carpenter said the biggest risk is heart disease. That’s because contaminants that get into a person’s lungs trigger an immune system reaction, causing harmful free radicals to circulate and contribute to plaque buildup in arteries.

“You breathe 24/7 every day of the year,” Carpenter said. “You can’t stop breathing. You’re going to breathe whatever is in the air where you are. So all of us are exposed to air pollution, effectively, continuously. It only varies by the amount.”

This makes it difficult to study, Carpenter said, because there’s no real control group in the world to show what human health would be without air pollution. Studies can only compare those who are exposed to less pollution to those exposed to more.

Things like lawnmowers, forklifts and leaf blowers are particularly “horrendous” for polluting the air, he said.

Laurie LaFond, a member of the Clean Air Action Network as well as the founder of the Grassland Bird Trust, asked Carpenter if those percentages vary by region. She thought the industrial pollution would be higher in the Glens Falls region.

Carpenter said he couldn’t answer the question, because he was not an expert on the local area, but said this region has major industrial sources in addition to traffic sources from the Northway.

The Clean Air Action Network has been predominantly focused on industrial pollution.

It first formed, in part, because Lehigh Northeast Cement Co. is updating its air permit to burn a paper and plastic mixture called raggertail as an alternative fuel source. The state Department of Environmental Conservation has not yet released its decision on the permit revision.

The grassroots organization then turned its focus to Wheelabrator Hudson Falls. Last month, the group hosted Mike Ewall, of the Energy Justice Network, to speak about ways to reduce trash and shut down burn plants.

While some have said the group should focus more on transportation and other pollution outside of local industry, Carpenter took a middle road.

GLENS FALLS — A national environmental advocate took a look at air-quality data available in the Glens Falls region, and said of the top three…

“The only point I’m trying to make here is you have multiple sources,” he said. “We can’t solve all of them, at least not immediately, but this is an important issue.”

Linda Plante of Glens Falls asked Carpenter what the average person can do to get more monitoring in the area. Tracy Frisch, founder of the Clean Air Action Network, also asked what Carpenter recommended to get something done. Warren County Supervisor Claudia Braymer asked how a small community could drive policy using science.

It would be difficult to do any kind of study locally, Carpenter said, because the population is too small.

“You’re not going to get statistical significance, and the reality is, you don’t need to do a study here to know people are impacted by air pollution,” Carpenter said.

He encouraged the audience to speak up and get to the governor’s office. Some audience members expressed frustration with the DEC and other state agencies, because they often say the industries are operating “within allowable limits.”

Carpenter said it’s important for the public to remember that the DEC and U.S. Environmental Protection Agency are political organizations. They balance the interests of public health with economic industry.

“They’re not safe levels,” Carpenter said about “allowable limits.” “They are not meant to be a standard of what’s safe or not safe.”

There is no safe level of lead exposure, Carpenter said as an example, and yet some of the area’s plants emit lead.

The DEC also uses averages over a day, week or more to measure industrial pollution, which fails to take into account spikes of pollution, he said.

Several audience members talked about times in the middle of the night when the sickly sweet, rotten egg smell permeates the outdoors. Carpenter said those times are when air samples should be taken. He has done this in other locations and found “some of the concentrations (of pollutants) were 10,000 times higher than EPA levels, but it was a one-shot exposure.”

“High-level exposures really are important in triggering disease,” he said.

He mentioned Summa canisters, a kind of container that can capture an air quality sample, as a way the organization could test the air for itself. Carpenter said it would be good to get a sample when the industrial smell is strong.

“It’s not an easy road to get politicians to pay attention, to even get the community informed enough so they really bang on the table and demand some action,” he said.

'What's in My Water?' New report shows low levels of contaminants in some systems

BENNINGTON, Vt. — A new organization founded by a former regional administrator for the U.S. Environmental Protection Agency is working to get…

A new pilot program this fall will experiment with closing gates at two Lake George boat launches, according to the state Department of Enviro…

David Carpenter, head of the University of Albany’s Institute for Health and the Environment, speaks about air pollution Monday at Crandall Public Library in Glens Falls.

Tracy Frisch, founder of the Clean Air Action Network, kicks off a meeting about human health and air quality at Crandall Public Library in Glens Falls.