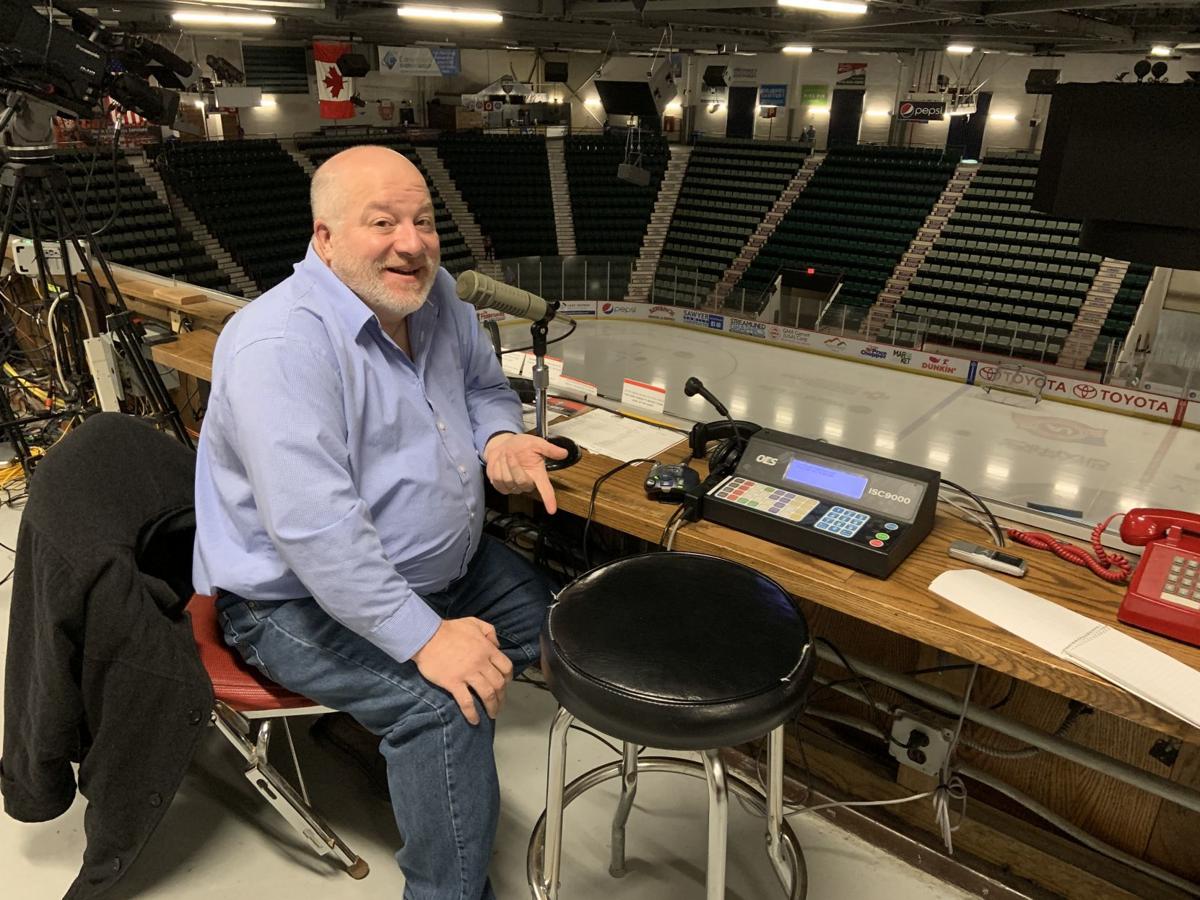 Dan Miner in the seat where he becomes the voice of professional hockey in Glens Falls. 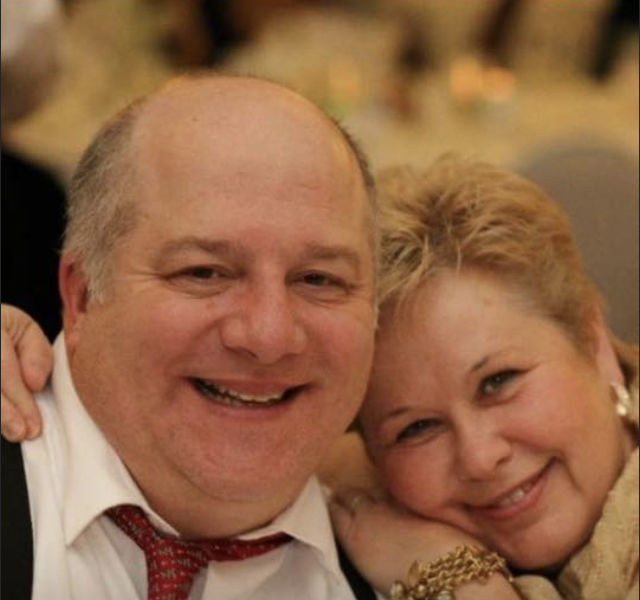 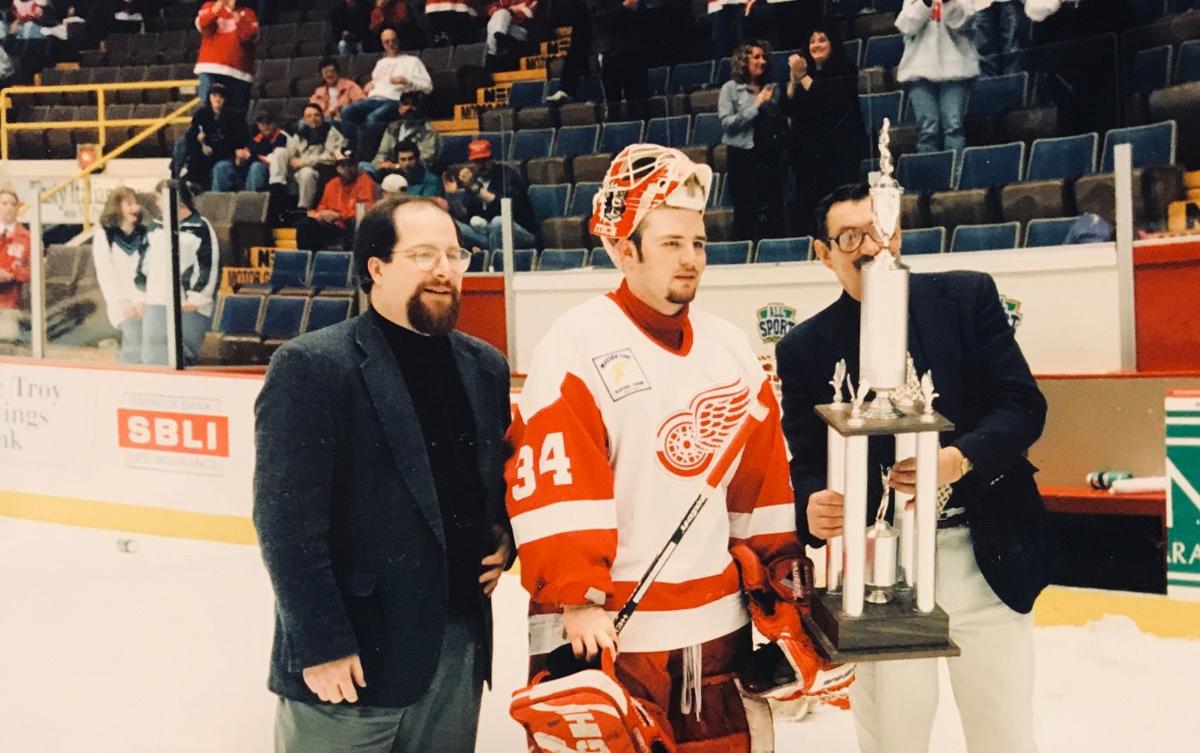 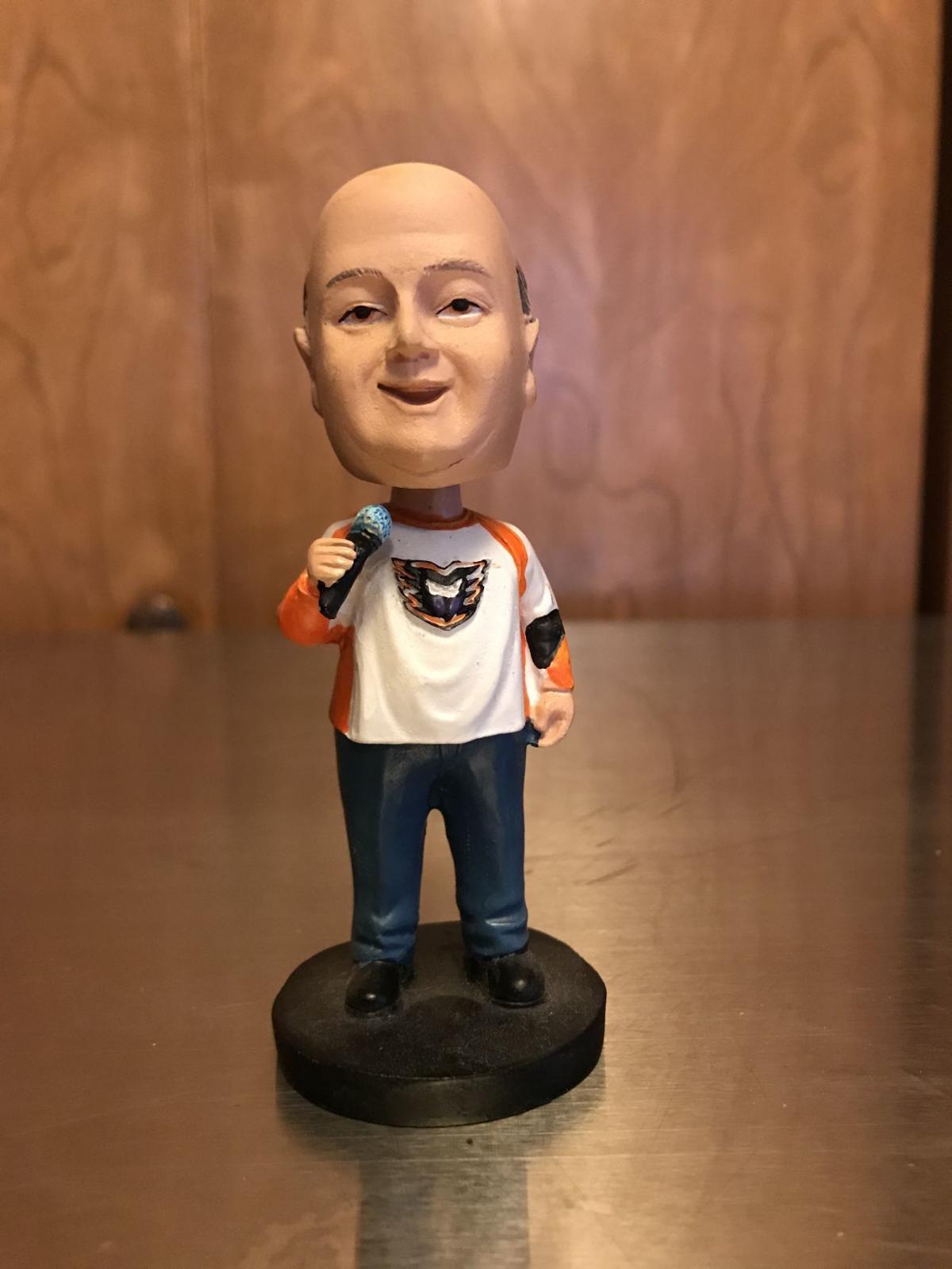 You know you've made it as a sports announcer when you're enshrined as a bobblehead.

GLENS FALLS — For years, when the annual Adirondack Hockey Hall of Fame ballots were released, WCKM morning show host Pete Cloutier would refer to his radio partner Dan Miner as “other.”

“Other” was the final spot on the ballot, essentially for write-ins for the honor, and with Miner being the voice of hockey in Glens Falls for more than 20 years, Cloutier was paying sideways homage to Miner’s work.

The duo had a much bigger laugh, however, when this year’s inductees were announced and Miner was actually named.

So was Cloutier, sort of.

“When the press release came out it said Miner and Cloutier headed into the hall, so I started teasing him saying ‘Look at that, we got in together,’” Cloutier said. “Of course, they were talking about (former Red Wings player) Sylvain Cloutier.”

The AHHOF Class of 2020 also includes:

H. Douglas “Doug” Burch – For more than 40 years, Burch played an important role in the development and growth of hockey in the Capital Region and the Adirondacks.

The Adirondack Hockey Hall of Fame inductees will be honored on Saturday, Feb. 22, 2020 at Cool Insuring Arena.

For Miner, a Whitehall native whose voice is probably more recognizable than anyone else’s in the region, the honor is a big one. Sure, he had a Bobblehead made in his likeness, wearing an Adirondack Phantoms jersey, but the Hall of Fame?

“I never expected to be in the hall of anything, except maybe hall of shame,” he said on Thursday, from his seat in the Cool Insuring Arena press box. “It’s one of those things you have in your head, but you don’t go asking for it.”

Miner has been in local radio since 1985 and has worked for every hockey team that ever played in Glens Falls — initially, doing live arena promotions as a “host” for the AHL Adirondack Red Wings, then becoming PA announcer in 1999 for the Icehawks.

He has also hosted the morning show on WCKM with Cloutier for nearly 24 years, the longest-running radio partnership in the region.

The hockey gig started when Icehawks coach Robbie Nichols and owner Art Shaver asked him to do it after seeing him in action for the Red Wings.

The Icehawks and Nichols provided one of Miner’s more memorable hockey promotion moments when an effort to sell season tickets went horribly wrong.

Nichols and Miner were living in a house made of cardboard cases of Pepsi in front of Glens Falls Civic Center, as it was known at the time, when remnants of a hurricane swept through the city, decimating the cardboard “home” and knocking a heater into a couch and igniting it.

“But Robbie was the ultimate showman and said we’re not leaving,” Miner said.

A year or so later, Miner was living on the Civic Center’s roof for a week — also in an effort to sell tickets.

Cool Insuring Arena General Manager Jeff Mead said Miner has arguably done more for Glens Falls hockey than any non-player ever. For years, Miner has turned hockey games at the arena into something bigger than the game itself, Mead said.

“Our job is to entertain fans, and Dan is better at that than anyone I’ve ever heard,” Mead said Thursday.

His tag lines are legendary including his build-up to a high-volume “CatsEye” Pest Control, and more recently, his “Queensbury Hotel icing … icing … icing,” intoned in a trailing voice that, Mead said, can often be heard being recited around town.

The PA announcer for the Worcester ECHL team has also started using the fading-off icing tag, which Miner loves.

Asked if he believes he could have called games in the NHL, making more money and gaining more prestige, Minor said that was never something he wanted.

When ESPN analyst Steve Levy and former Red Wing Coach Barry Melrose ran the Adirondack Frostbite team, Levy was in the press box one day, telling him he belonged in the NHL, Miner said.

“’You’re NHL, you’re NHL!’” he recalled an excited Levy saying. “But I had no desire to do that. Radio is what I’ve always wanted to do and I like the big-fish-in-a-small-pond status.”

Cloutier, who Miner said is like a big brother he never had, talked about Miner’s giving spirit and their efforts over the years to help out local kids through Operation Santa Claus and Adopt-A-Child.

He spoke about their friendship, too, and about struggling to help Miner through bouts of crippling depression.

“There’s nothing we wouldn’t do to help each other,” Cloutier said.

Miner reflected on that time period Thursday, saying he “thought he was cured” of the depression that had debilitated him a few years earlier. He stopped seeing his therapist and stopped taking medication. But after his most recent slide in 2016, he realized he isn’t and won’t ever be cured, but if he stays with the treatment program, life can be good.

“That’s the tough thing, to have to face and admit that,” he said. “There are good days and bad days now, but the bad days aren’t as bad as they used to be.”

He seemed to enjoy reminiscing and reflecting from the press box a day after Christmas, as former NHL player Claude Loiselle and his family knocked a puck around the ice in an otherwise silent arena. He talked about bus trips with the Icehawks when virtually anybody might be driving the bus at any time. He talked about Icehawk player Trever Senn being the toughest guy on the ice he’d ever covered.

And he spoke about his grandkids, and how cool it is that everyone knows them at the arena and how much they love getting into the press box with him.

Miner’s wife, Lisa, whom he credits as his rock, gushed when asked about her feelings when she learned he was headed to the Hall of Fame.

She said he seems to be in a happy place right now and this honor can only help.

But his dual radio and hockey life means a lot of family sacrifices. He has to work three nights a week, after being up at 3 a.m. to do the radio show, and she said, he can’t go many places without being asked to recite “Catseye,” or “icing” — sometimes into people’s phones.

Reaching the Hall, she said, means his contributions are being recognized and rewarded.

“I’m just so proud of him for achieving this great honor and not ever giving up on himself or life,” she said. “I waited for this moment for so long. But it had to happen. He is hockey.”

Former players Sylvain Cloutier and Frank Littlejohn join "builders" Doug Burch and Dan Miner as the class of 2020 inductees for the Adirondack Hockey Hall of Fame.

Dan Miner in the seat where he becomes the voice of professional hockey in Glens Falls.

You know you've made it as a sports announcer when you're enshrined as a bobblehead.