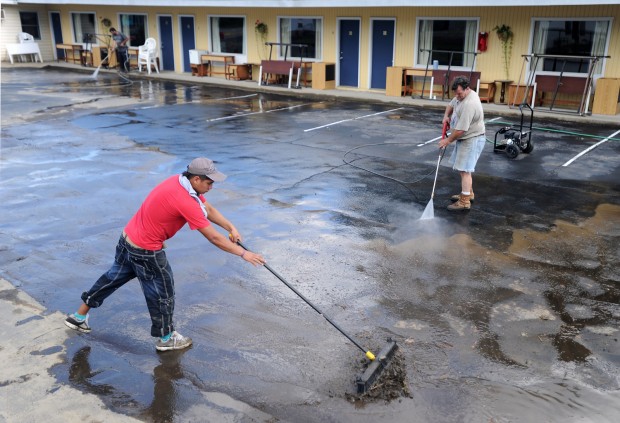 Enrique Nicolas Olvera Agis pushes water and debris with a broom as he and a small crew help clean up the parking lot of the Blue Moon Motel in Lake George on Tuesday, Aug. 30, 2011. Water dumped by Tropical Storm Irene washed through the parking lot and flooded rooms at the motel. (Aaron Eisenhauer - aeisenhauer@poststar.com) 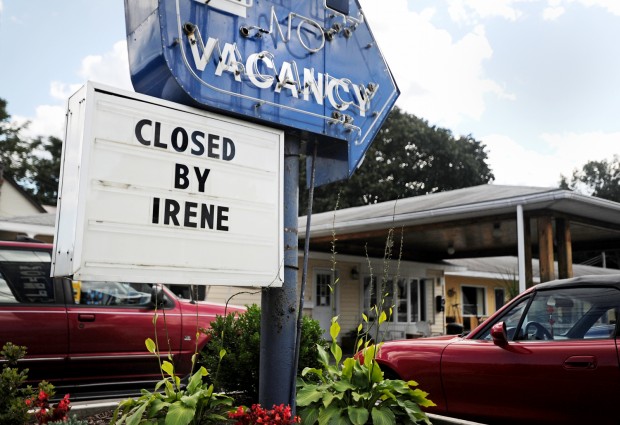 Aaron Eisenhauer - aeisenhauer@poststar.com The Blue Moon Motel in Lake George attributes their closure to Tropical Storm Irene on their marquis on Tuesday, August 30, 2011. Rushing water left the parking lot covered in mud and flooded rooms at the motel.

Just two days after Tropical Storm Irene passed through the region, the pace has started to pick up in Lake George. And while the storm chased away many tourists, officials are hoping a new group will fill up hotels for the Labor Day weekend, oblivious to the past week's events.

"We are going to be ready for this weekend; there is no question about it," said village Mayor Robert Blais.

The brighter outlook was due in no small part to the return of power and water late Monday, overcoming the two biggest challenges for restaurants and hotels.

Signs of damage remain - toppled trees, road washouts, sunken docks and a mangled Million Dollar Beach are all plainly visible - but they didn't seem to be a major distraction for tourists. On Tuesday afternoon, two sunbathers stretched out on a debris-filled patch where the sandy beach used to be.

A fireworks show will take place as scheduled on Saturday evening. And by the weekend, Shepard Park and part of the beach will be open, as will three public docks not destroyed by the storm.

Blais said most hoteliers are reporting steady reservations for the holiday, with the exception of four or five properties that suffered severe flooding. Even those motels are partially open, or hope to be by the weekend, he added.

"I certainly believe there will be people from the New England states and New Jersey that were affected by the storm that will have to tend to their storm damage. But after a storm like this, people are also looking to get out and have fun and relieve the stress," he said.

Tom Guay, general manager for The Sagamore in Bolton, said the resort is booked solid on Saturday and he expects to have more than 80 percent occupancy on Friday and Sunday nights.

"We've had a few calls about whether it's safe, but we have full power and it's business as usual," he said.

At Shoreline Cruises, Marketing Director Kevin Griswold said the business was dealing with only minor damage to its docks.

"We're operating our one-hour cruises, and the restaurant is doing an inventory and making sure all the food is servable," he said Tuesday. "We have a wedding on one of our boats (this weekend), and we're expecting to be busy."

Turf Hotels President Michael Hoffman oversees four hotels in the Capital Region, including the Holiday Inn in Lake George and the Hampton Inn and Suites in Saratoga Springs.

A tree fell on a car at his Albany hotel, and power was lost in Lake George. By Tuesday, though, things were getting back on track.

"We have been beaten up by the storm this week, without any question, but we see ourselves getting strong (occupancy numbers) into the weekend," he said.

"Come Thursday through Labor Day weekend, it will be as if it never happened."

In Saratoga County, too, officials said they are not worried about Irene stifling weekend travel.

Saratoga County Chamber of Commerce President Todd Shimkus said the area saw little damage and is ready for the holiday.

"You never know what people are going to want to do," Shimkus said. "I think the important thing is that we are certainly doing everything we can to let people know Saratoga is open for business this weekend."

Warren County Tourism Director Kate Johnson said her office has fielded some calls from people wondering if they should keep their travel plans. Aside from isolated closures, she said Warren County is also open for business.

"As we move along, every hour there will be improvement," she said.

The exceptions include some state campgrounds, and roughly five Canada Street motels.

State Department of Environmental Conservation spokesman David Winchell said 30 of the Adirondack Park's 45 state-run campgrounds are open, including the Lake George island and battleground sites. However, Hearthstone Point and Rogers Rock on Lake George were closed as of Tuesday because of downed trees and power lines. They have about 580 campsites between them.

"The goal is to have everything open by Labor Day," Winchell said.

In addition, an estimated five motels sustained serious flood damage in and near Lake George Village, including a cluster at the northern end of Canada Street.

Nancy Stafford, who bought the Blue Moon Motel two years ago with her husband, said English Brook surged through their parking lot on Sunday.

By Tuesday, a dump truck had cleared a load-and-a-half of mud from the parking area, crews were power-washing the grounds, and furniture was drying outside. Stafford said water soaked 14 of the motel's 31 rooms, rendering them unusable for the time being. The carpets were cleaned on Monday, but a mildew smell persisted, and the paneled walls were still dark with water 3 inches from the ground.

Blue Moon was closed on Tuesday but planned to honor reservations for eight unaffected rooms this weekend - a better outcome than she first expected.

"I initially thought, ‘That's it. We're closed for the season,'" she said.

"You just take it day by day."

He said the flooding was worse than anything he's seen in 25 years running the motel. It damaged his foundation and soaked half the guest rooms.

But Carroccia has also been surprised by random acts of kindness.

A stranger with a Bobcat vehicle spent almost four hours removing mud from the parking lot on Monday. And on Tuesday afternoon, one of the few families staying on-site swept and shoveled the dirt that remained. "There are still a few old-fashioned people around," he said.

Enrique Nicolas Olvera Agis pushes water and debris with a broom as he and a small crew help clean up the parking lot of the Blue Moon Motel in Lake George on Tuesday, Aug. 30, 2011. Water dumped by Tropical Storm Irene washed through the parking lot and flooded rooms at the motel. (Aaron Eisenhauer - aeisenhauer@poststar.com)

Aaron Eisenhauer - aeisenhauer@poststar.com The Blue Moon Motel in Lake George attributes their closure to Tropical Storm Irene on their marquis on Tuesday, August 30, 2011. Rushing water left the parking lot covered in mud and flooded rooms at the motel.