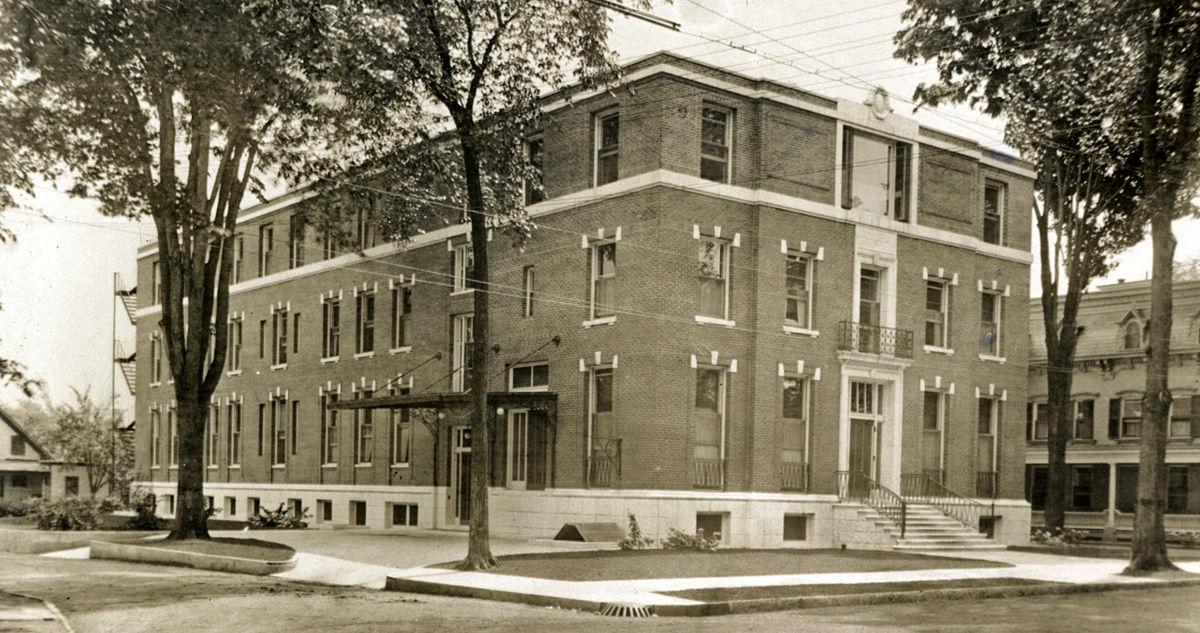 Glens Falls Hospital is seen in this photo, circa 1927. Then and now photos are featured in a show opening soon at the Chapman Historical Museum in Glens Falls. 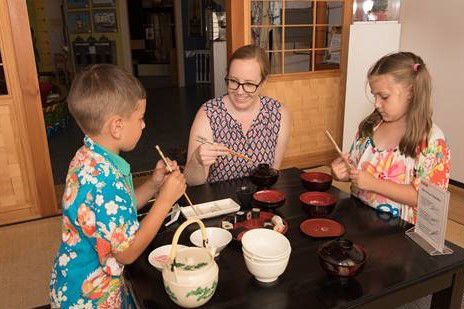 From left, Chase Kindron, Bethanie Muska Lawrence and Rosie O'Leary enjoy some refreshment at the World Awareness Children's Museum on Warren Street in Glens Falls. Lawrence is the director of the museum. 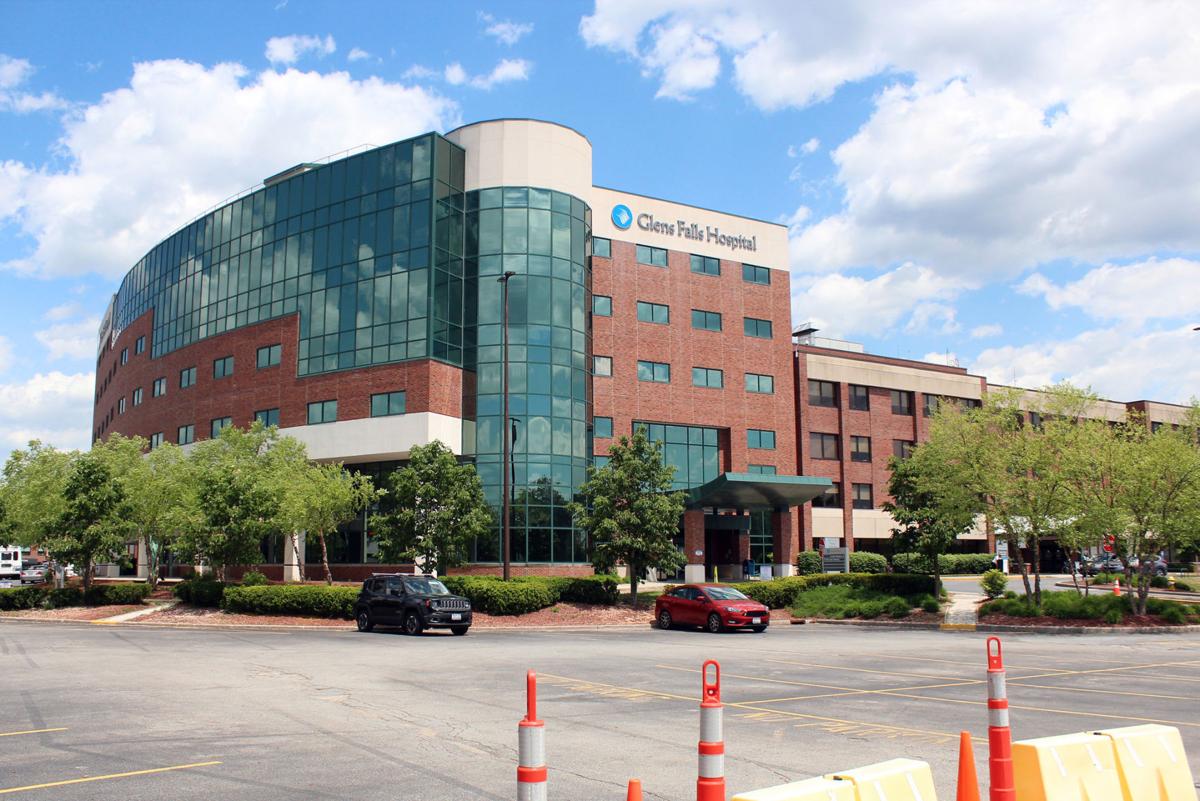 GLENS FALLS — The Hyde Collection art museum reopens to the public May 1, allowing visitors to drop in a few at a time, as museums and the library and other local cultural institutions crack open the tap of public access closed since last spring.

It could be just a trickle at first — the Hyde will take online reservations and allow people in at 15-minute intervals — but it’s more than these institutions have been able to offer for the past year, and their leaders hope it’s the start of a return to normal operations.

“Since we’re closed, we don’t have revenue from admissions. It has hurt us,” said Norman Dascher, the Hyde’s CEO.

Dascher came to work for the Hyde in December 2019, just a few months before the pandemic shut down the museum, along with a whole lot of other institutions and businesses across the state and nation. His background is not in arts but in nonprofit management, and his pragmatic approach has been well-suited to the moment.

The museum furloughed four of its 13 full-time workers for what Dascher calls “the pause,” while all others, including him, had their hours reduced either 20% or 50%. Annual fundraisers were canceled, but local donors were generous and membership actually increased.

The museum received a Paycheck Protection Program loan and has applied for another and has managed to undertake some projects during the idle year, including painting, lighting, floor refinishing and timely improvements to the building’s heating, ventilating and air conditioning systems.

The Hyde reopens with an exhibit of pieces from its own collection — “The Very Best of the Hyde: Masterpieces and Mysteries.”

Crandall Public Library is already open for browsing, with a maximum of 50 people at a time, and should be able to reopen further by summer, “unless something goes completely south,” said Director Kathy Naftaly.

Community events like concerts and films are not yet being held, but, when it’s warm, the staff is looking at staging some of those events outside in City Park, where people can spread out. The library’s community room quickly gets crowded, Naftaly said, but about 200 people can be spaced out at a safe distance from each other for a show in the park.

Other activities, like the quarterly book sales and the public donations that supply them, are still on hold. The sales are popular and notoriously crowded, so will have to wait until conditions are safe for close contact. Although a series of outdoor sales was held last summer, that might not happen this year without donations to replenish the supply.

The Folklife Center and the downstairs gallery may also be able to open within the next couple of months, and its director, Todd DeGarmo, has been preparing, putting up a new exhibit in the gallery that features traditional crafts from Glens Falls’ sister city of Saga, Japan.

“We’ve been one of the repositories for gifts that have come in over the years,” he said, and since Saga has been Glens Falls’ sister city for 30 years or so, that’s a lot of gifts.

Like other institutions (and businesses), the Folklife Center has been concentrating on online content, including YouTube videos on the Batten Kill and Lake George that are being adapted as audio stories for a phone app.

“We’re hoping to have it done by summer,” DeGarmo said, so visitors can listen to the stories to deepen their experience of the area.

The Chapman Historical Museum has remained open since last summer, but by appointment and with a skeleton crew. The Chapman, too, survived a challenging year through the generosity of local donors, despite a large drop in attendance and the cancellation of annual fundraisers.

A PPP loan (forgiven under the terms of the program) also “really helped,” said Director Tim Weidner. “It helped us keep our key staff on payroll.”

“Our goal is to open up fully as soon as possible,” he said.

The Chapman opens a new exhibit, “Changes: Now & Then, Photos of Glens Falls & Queensbury,” on May 1. It features 36 sets of photos assembled by researchers Robert Bayle and Andrea Matte that show local buildings and businesses as they appeared in the past and now.

In some cases, as with Glens Falls Hospital, although the old building still exists, it’s difficult to tell where it is, since additions have greatly expanded and overwhelmed the original structure.

World Awareness Children’s Museum made it through the pandemic year by holding a kids summer camp last year, offering online workshops and broadcasting cultural education shows on Look Media. But the museum has been closed to in-person visitors since the middle of March of last year.

Director Bethanie Lawrence, like Dascher at the Hyde, has endured a challenging start to her tenure, which began in November 2019.

Nevertheless, because of donors’ generosity and two PPP loans, the museum met 90% of its revenue goal and no one got laid off.

This year, the museum will hold in-person small group workshops through June, then summer camp for kids in July and also will start opening on weekends in July for general admission. In August, they plan to expand with some weekday hours, Lawrence said.

The museum is opening a new exhibit this summer, “Thailand: Beauty and Beast.”

Engineers create device that can levitate objects with sounds.

Engineers create device that can levitate objects with sounds.

An event celebrating the opening of Broad Street Commons was disrupted Wednesday by a tenant complaining of frequent criminal activity at the workforce housing complex.

A Glens Falls man has been arrested after police said he punched his 1-year-old son in the stomach.

A Queensbury man is facing felony drug charges after police discovered cocaine at his residence during a routine parole check.

A weeklong gathering hosted by a Gansevoort church prompted local health officials to issue a COVID-19 exposure advisory on Tuesday after more than a dozen attendees tested positive for the virus.

Glover out as Salem school superintendent

David Glover is out as superintendent of schools for the Salem Central School District.

A Glens Falls man with a lengthy criminal history is facing new charges after it was determined he was in position of dangerous contraband while in jail earlier this month.

Glens Falls Hospital is seen in this photo, circa 1927. Then and now photos are featured in a show opening soon at the Chapman Historical Museum in Glens Falls.

From left, Chase Kindron, Bethanie Muska Lawrence and Rosie O'Leary enjoy some refreshment at the World Awareness Children's Museum on Warren Street in Glens Falls. Lawrence is the director of the museum.