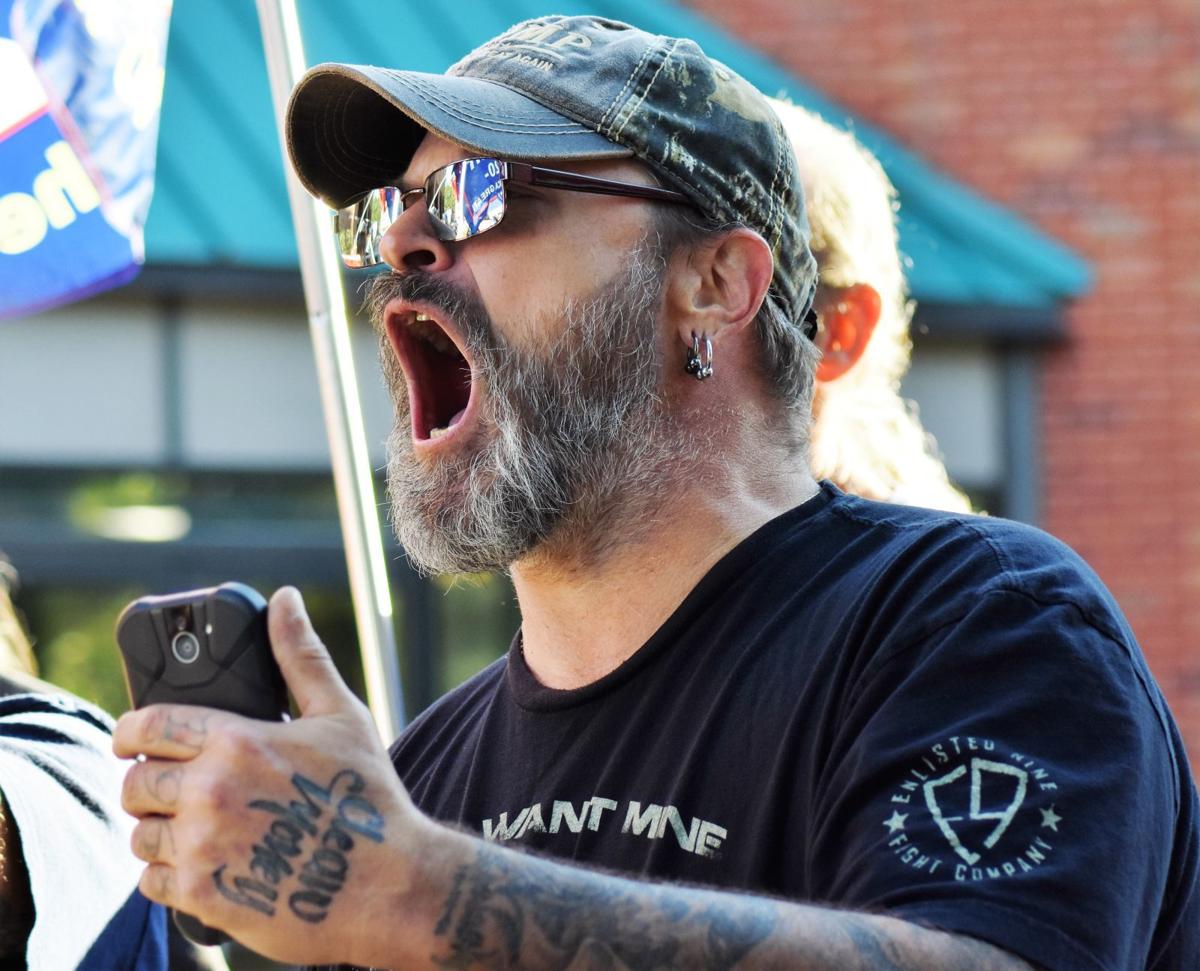 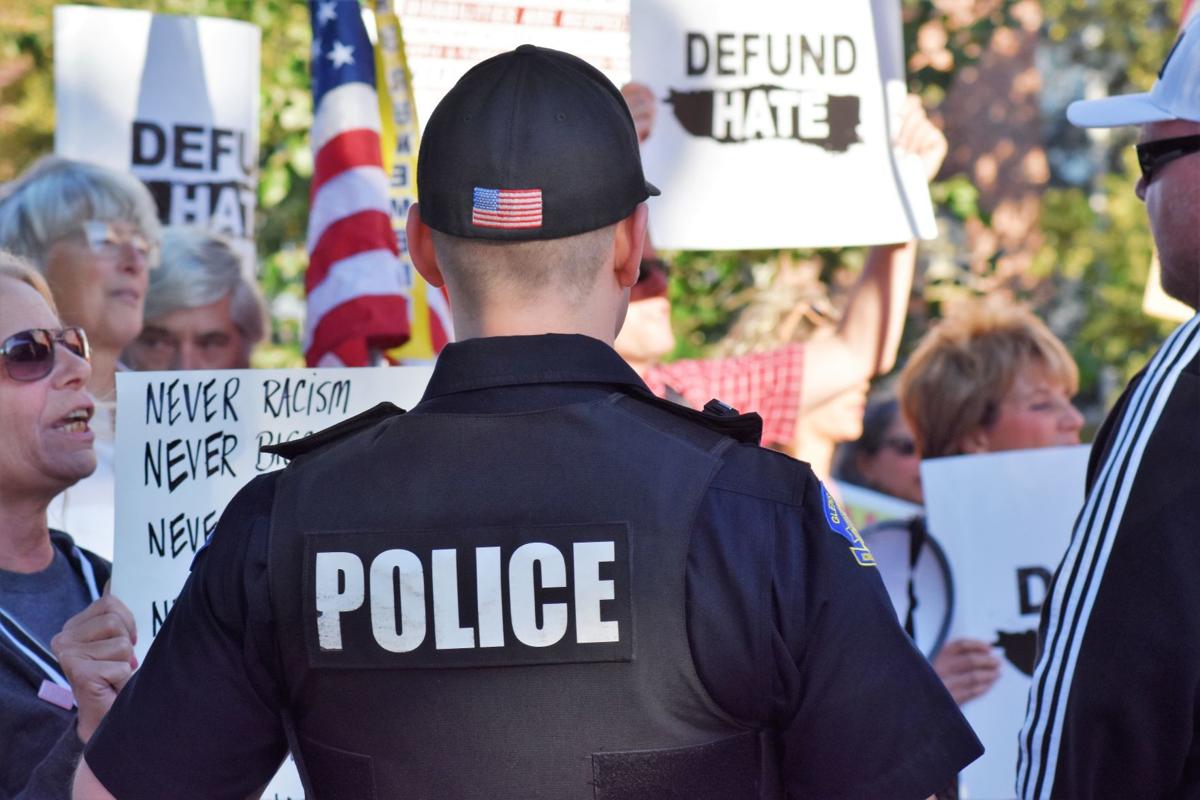 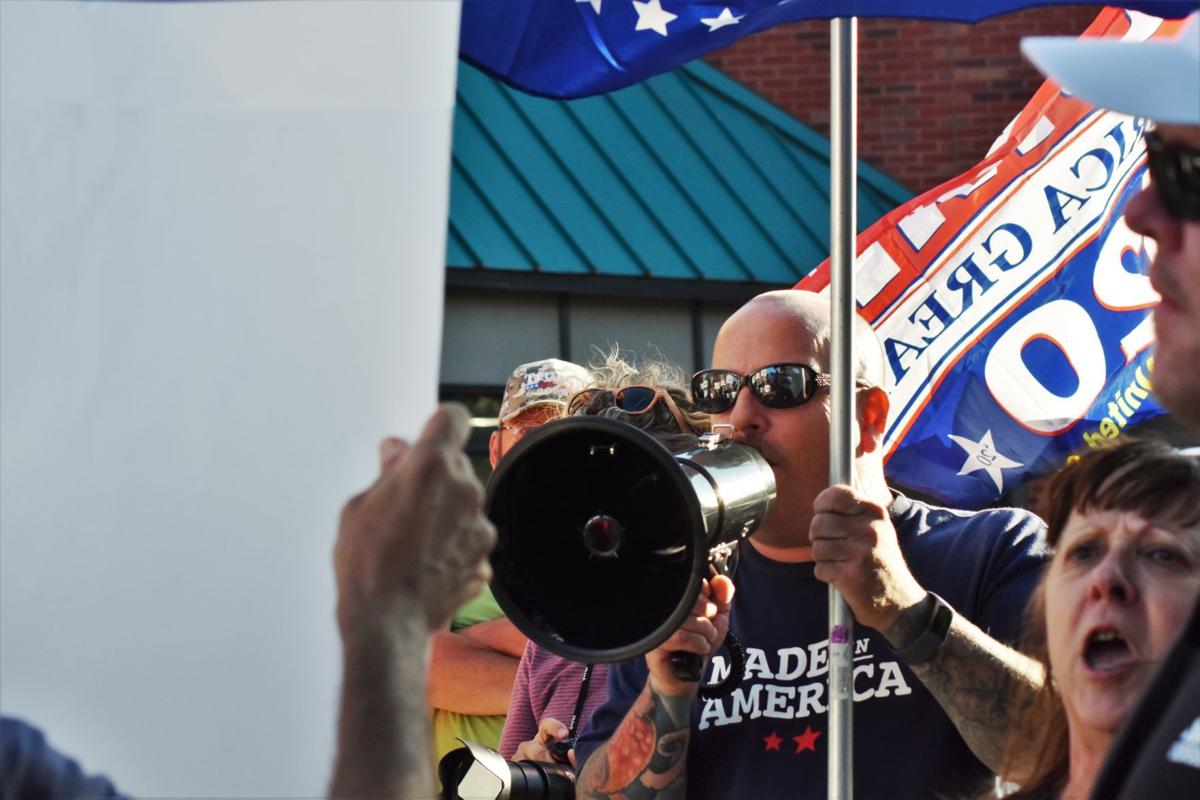 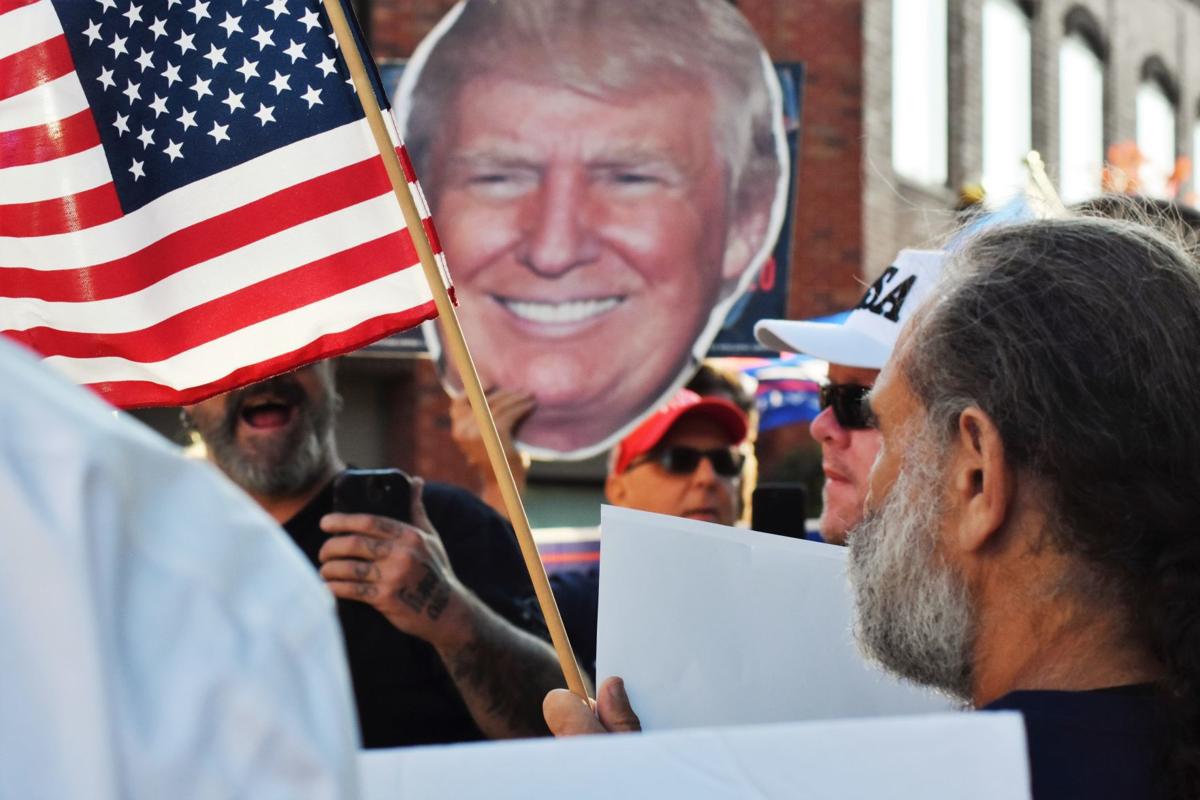 A pro-Trump group presses within inches of another group calling on lawmakers to not fund ICE raids last Friday in downtown Glens Falls.

GLENS FALLS — Activists are expressing concern about their safety after being confronted with angry Trump supporters, who yelled profanities and got within a foot of them, impeding their progress on the sidewalk to march to the office of U.S. Rep. Elise Stefanik at a protest last week.

“They’re very angry and if something happens — somebody trips and falls, somebody could misinterpret it as someone was pushed and it could start a violent riot,” said Agata Stanford, one of the anti-Trump demonstrators.

Stanford was among those participating in a Defund Hate event, which was held last Saturday as part of a national effort calling for decreasing or eliminating funding for Immigration and Custom Enforcement.

The event began in City Park, then protesters marched to the office of Stefanik, R-Schuylerville, on Warren Street.

The group’s members said they were met with “lewd language, verbal aggression, and the threatening physical posturing of Trump supporters whose intent it was to disrupt our gathering,” according to a letter sent by the group on Wednesday to Mayor Dan Hall and Police Chief Tony Lydon. The letter followed a meeting with city officials.

“The Trump supporters at the circle hot-footed it over to Stefanik’s office and blocked off the entire plaza, and we had no recourse but to stay on the grass,” Stanford said.

The private property owner does not want people on the grass, she said.

The Stefanik demonstrators were outnumbered by about 2-1 by the pro-Trump group, which was swelled by a contingent from Utica.

The anti-Stefanik group is calling for the city to enforce laws on disorderly conduct and put in barricades similar to the ones set up at Centennial Circle, to keep the groups separate.

Stanford said the Trump supporters are yelling profanities while small children are present at some of these events. She wants the city to enforce the law against disorderly conduct, which prohibits making threats and unreasonable noise, using obscene language, disturbing lawful assembly, obstructing pedestrians, not dispersing or creating a hazardous condition.

“We need some enforcement because I’m really frightened it’s going to cause a big problem. We don’t need another Charlottesville. People are so angry at us,” she said.

“We’re going to go to the attorney general and find out about actually enforcing it,” she said.

Protesters are also asking that the city ban the use of flagpoles, because they can be used as weapons.

The next protest is scheduled for Saturday. Progressive groups are holding the We the People March in City park at noon. This is part of a series of marches happening at more than 65 locations across the country to demand action on gun violence, migrant children in detention centers, climate crisis, corruption, kleptocracy and violations of human rights, according to a news release.

Following the rally at the park, the group will march to Stefanik’s office.

“We did get the complaints about it. They’ve complained on this protest and they complained on the last protest,” said Mayor Dan Hall. “We’re working on it trying to make sure that both sides can express their opinions. We just don’t want them to get out of hand.”

Hall said he is asking each group to respect each other’s space on the sidewalk.

“Everybody is an adult here,” he said.

As for the profanities and yelling, Hall said, “It’s called freedom of speech.”

Police are there to step in when things get too heated, he said.

“It’s a judgment call. If somebody threatens (someone) or somebody is breaking the law, then they will respond,” he said. “They’re not going to jump in if they’re not seeing anything that’s in violation of the law.”

The city has put up barricades to keep people out of Centennial Circle. City officials also have talked about requiring a permit but appear to have backed away from that idea. Hall said the city would like some sort of heads up about demonstrations.

Hall said dealing with protesters and counter-protesters is still new to Glens Falls, so officials are looking to other communities and entitles like the New York Council of Mayors for guidance.

So far, this is all being handled administratively.

“I don’t know that there’s anything that has to go in front of the council yet,” he said.

The city has has to pay overtime because of these protests, but Hall was not able to provide numbers at this point.

Hall said he has not received any complaints from downtown business owners about the protests.

“Nobody has said anything to me,” he said.

The pro-Trump groups dispute that they are being intimidating.

Mike Kibling of North Country Deplorables said the pro-Trump group is not breaking any laws.

“We’ve never been arrested,” he said.

He contrasted that with six anti-Trump protesters who were arrested on Aug. 8 for refusing to leave Stefanik’s office.

Kibling denies anybody from the pro-Trump groups blocked access. He said, at one point, one of the police sergeants asked them to create a little more separation between the groups and the Trump group immediately backed up 3 feet.

Kibling said one of the protesters stuck his face right into his megaphone.

As for profanity, Kibling said, “I can’t control everybody and what they say in a situation like that.”

He said the idea of banning flagpoles is ridiculous.

“We’re not using anything as a weapon whatsoever,” he said.

Kibling said Trump supporters had a rally in Granville last Saturday that was disrupted by a counter-protester.

“He actually shoved me out into the road and draped a gay pride flag over my face. We caught it all on camera,” he said.

Kibling said that those expressing concern for their safety are just trying to “shackle” supporters of the president.

“We’re going to continue to practice our First Amendment right. We’re going to carry our flags. None of us are being arrested. We’ve got a lot of people. No one has broken any law,” he said.

The Trump supporters are wearing Go Pro cameras to document what is happening with video.

David Van Scoy of the American Patriots Express also the activist group’s concerns are an attempt to shut down opposing views.

BLOG: Should we worry about threats?

After The Post-Star posted its story about the concern that one group of protesters had about another in Glens Falls, the following comment wa…

A pro-Trump group presses within inches of another group calling on lawmakers to not fund ICE raids last Friday in downtown Glens Falls.