Become a Member
Read Today's E-edition
Share This
A decade after Iraq injuries, Marine is still fighting
2 comments
Share this
1 of 2 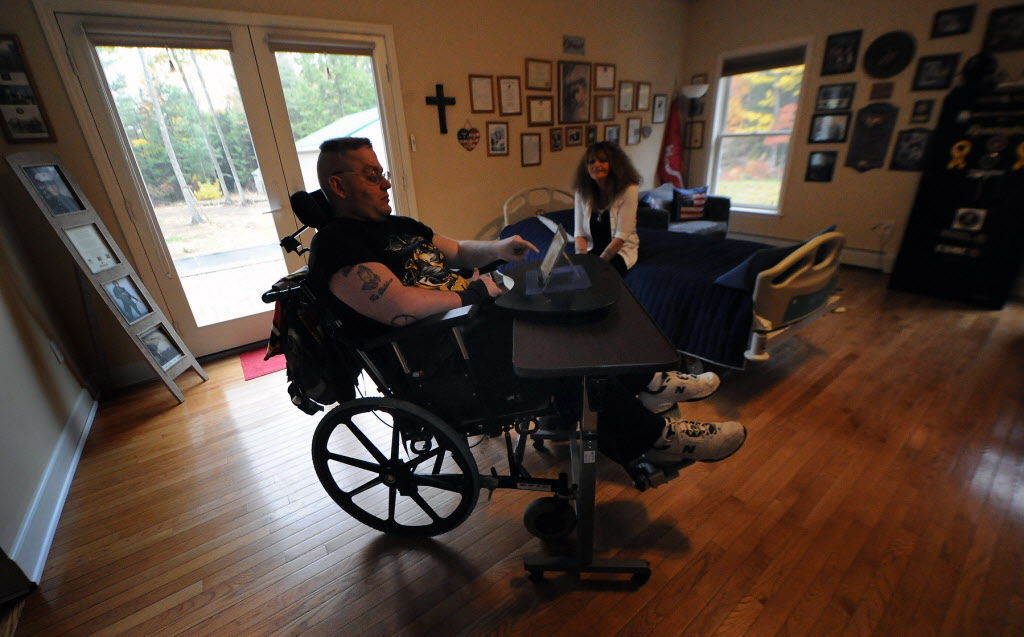 Eddie Ryan, who was shot in the head twice in Iraq 10 years ago as a Marine sergeant, plays video games Wednesday in his room as his mother, Angela, watches in his home in Lake George. A fundraiser is planned on Friday to assist the Ryan’s with medical expenses that the VA does not cover. 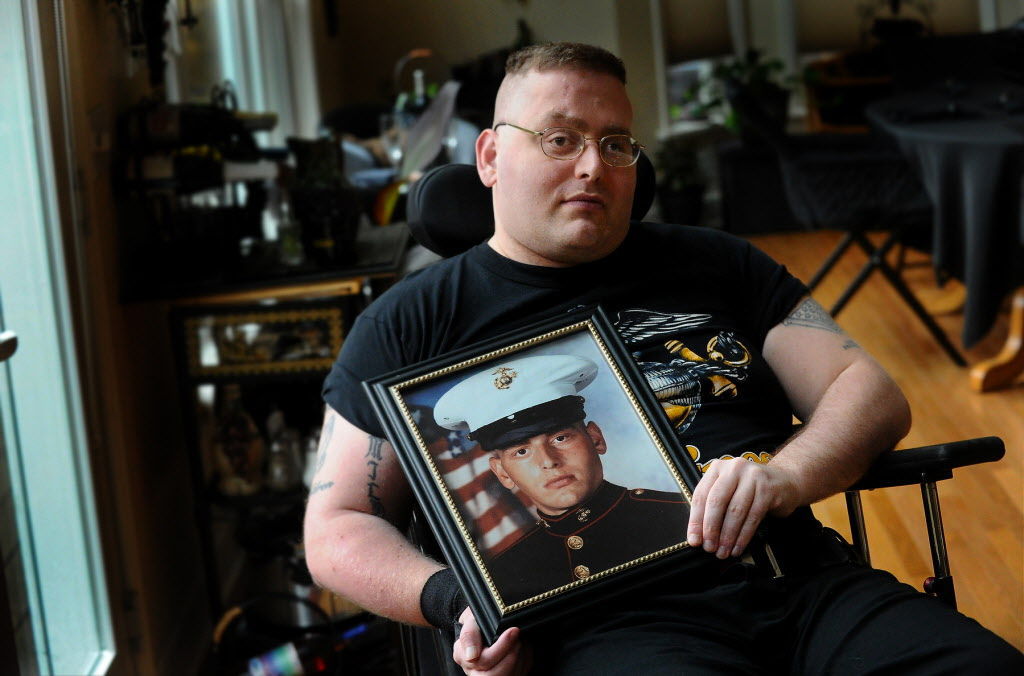 Eddie Ryan, who was shot in the head twice in Iraq more than 10 years ago as a Marine sergeant, poses in October 2015 with his Marine graduation photo that was taken in 2002 when he was 18 years old, in his home in Lake George. The U.S. government owes it to our veterans to offer them all the care they need and provide the best care possible.

“I was shot by friendly fire. I don’t know why they call it friendly,” said Ryan, 31, seated in his wheelchair Wednesday as he recalled April 13, 2005.

That was the day he was shot twice in the head and actually died before being resuscitated.

Ryan celebrates his “alive day” — a term used for the day he was wounded in action and evaded death — like a second birthday.

The roughly 6-foot former Marine sniper has won several battles in his recovery over the past 10 years, but he’s still fighting the war. He wasn’t paralyzed, but because of the traumatic brain injury, he had to relearn his speech and motor skills and is still relearning to walk. He can almost raise his right arm all the way to salute and has regained use of his left arm.

On Friday, Ryan will be the guest of honor at what organizers are calling an “appreciation dinner” at the Lake George Forum as his family struggles to fill in the gaps of what Veterans Affairs doesn’t provide.

During his third tour, the former U.S. Marine Corps sniper was on a mission with his team, Reaper 6, when he and other Marines on a rooftop were mistaken for the enemy. He was shot, but the other Marines on the roof were able to shoot off green flares to halt any additional fire.

“Thank God. If they shot that artillery round, none of them would have survived,” said Eddie Ryan’s father, Chris Ryan.

Eddie was the only one shot. One bullet barreled through his skull above his right eyebrow, damaging the frontal lobes and severing the retina to his left eye, leaving him blind in that eye. The other hit his lower left jaw.

Two other snipers were awarded Medals of Valor for placing their lives at risk to save him that morning in Ramadi. Five of them carried him down from the roof.

They had to drive Eddie outside the village, where a Black Hawk helicopter flew him to a triage area. There, a doctor initially walked past Ryan, trying to “get to the ones he could save,” Eddie’s mother, Angela Ryan, recalled.

From the corner of his eye, the doctor saw Ryan’s limbs thrashing, which told him Eddie wasn’t brain dead. He went to work.

Eddie was taken to Germany. His parents were flown there within 24 hours, “basically to say goodbye,” his dad, Chris Ryan, said.

When they saw his body, swollen with fluid, a tag was already looped around his toe, Angela said. His parents could only identify him by his multiple tattoos. One of them is an American flag on his right bicep with the inscription: “Land of the free because of the brave.”

After 16 months and four hospitals, a long rehabilitation journey began for a man who wasn’t expected to live.

Without batting an eye, Eddie said he’d do it all again.

He was left with a traumatic brain injury with damage mostly to the frontal lobes that control emotion and behavior. However, his memory is sharper than his parents’, they joke. His skull required reconstruction — the top part of his head is acrylic with titanium plates.

Slowly, he regained movement in his left arm by playing thumb wars with his sister. Now, he can nearly raise his right arm to a salute.

He’s working hard on sitting balance, gaining strength in his core muscles to sit at the end of his wheelchair or bed. After he finds his center, he can now sit on his own for several minutes — 39 minutes is his record — instead of flopping back.

The family, originally from Ellenville in Ulster County, had a vacation home in Lake George before building a permanent house in 2011 to be closer to the Stratton VA Medical Center in Albany.

Angela had to retire early from her job in a school cafeteria and move up first with Eddie. Chris, a unionized heavy equipment operator, came later. He can no longer work after his own injury that required five surgeries.

Eddie does range of motion exercises every night and goes to the Rehabilitation & Wellness Center on Country Club Road in Queensbury three days a week.

While the VA is a great resource for equipment such as wheelchairs or beds, the Ryans are struggling to pay for the physical therapy and nursing Eddie needs.

A few years ago, the VA cut the amount of hours it would pay for nursing for Eddie from 24/7 to only 40 hours a week.

“In his condition, he is not getting the real physical therapy he needs,” said Jack Abrahams, a member of a committee who helped organize the appreciation dinner for Ryan at 6 p.m. Friday at the Lake George Forum.

“Most of us will never meet a wounded warrior. But Eddie is every wounded warrior to me,” said family friend Scott Walton, who also helped organize the dinner.

Angela said the VA will fund some of the physical therapy but not a personal trainer — which they estimate could cost $75 to $100 an hour — because that’s not policy.

It’s also not as easy to get help from nonprofits as some might think, they said. They do get help from other events, such as the ride by the Leathernecks Motorcycle Club every year.

“We’ve been fighting for years for an actual physical therapist to work with him. They’re trained for traumatic brain injuries where they could unlock things, help him, and work with his arms and legs, Chris said.

He said the VA will pay for 12 physical therapy sessions. Then they require a written summary from the physical therapist about his improvements. But by the time the VA gets that and approves another 12 sessions, it might be six weeks, Chris said.

“All that you worked hard for, in that six weeks, it’s like you lose it,” Chris said.

Tickets for Friday’s dinner cost $20 each and include pasta stations, salad, bread and dessert. There will be raffles and music, too.

“Both of them have dedicated their whole life — 24/7 — and take what relief they can get, which is little,” Abrahams said.

His parents insist Eddie had “the hard job.”

“Me and Angie haven’t shed any blood over here. We take care of our son because we love him, because we’re his parents,” Chris said.

Charlotte Mott, who turned 100 on Sunday, was surprised by a birthday bash at the Wellness Center when she came in to exercise Friday. She comes to the Wellness Center and she’s befriended nearly everyone there, including Iraq War veteran Eddie Ryan.

A Tribute to a Hero celebration concert has been scheduled as a fundraiser and to pay tribute to Eddie Ryan, the wounded Marine.

Eddie Ryan, who was shot in the head twice in Iraq 10 years ago as a Marine sergeant, plays video games Wednesday in his room as his mother, Angela, watches in his home in Lake George. A fundraiser is planned on Friday to assist the Ryan’s with medical expenses that the VA does not cover.

Eddie Ryan, who was shot in the head twice in Iraq more than 10 years ago as a Marine sergeant, poses in October 2015 with his Marine graduation photo that was taken in 2002 when he was 18 years old, in his home in Lake George. The U.S. government owes it to our veterans to offer them all the care they need and provide the best care possible.