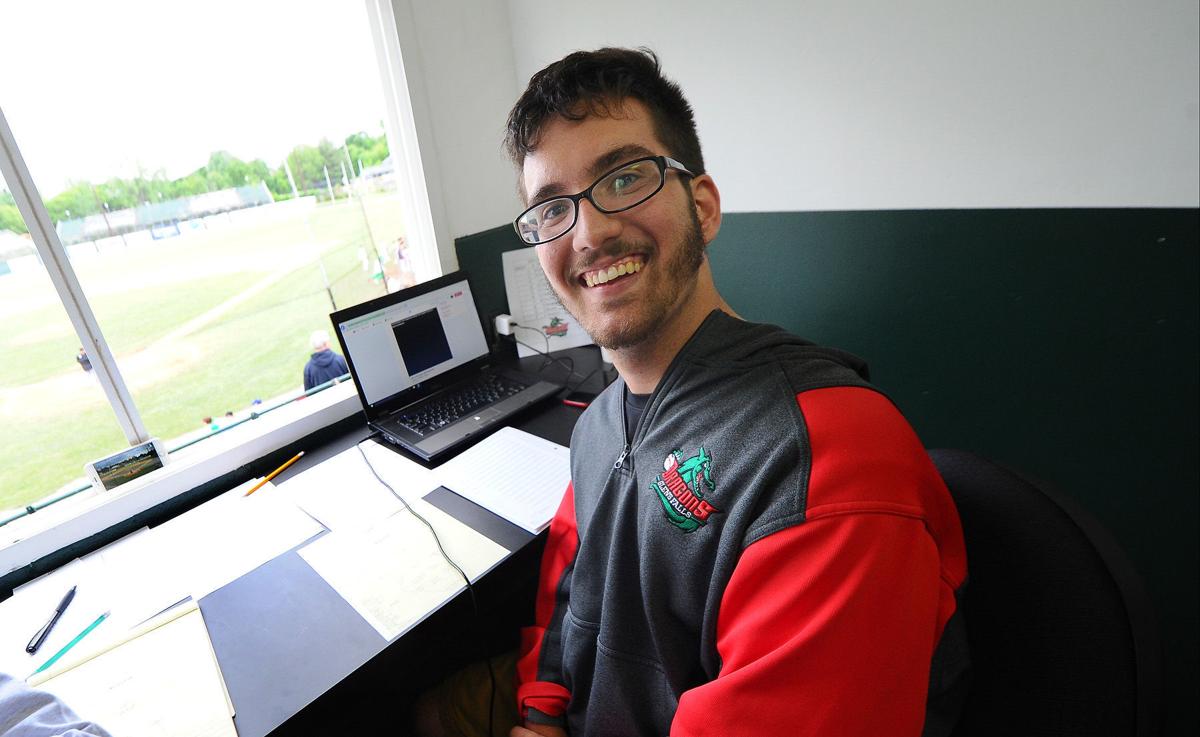 Seth Cooper, a South Glens Falls High School student, is the voice of the Glens Falls Dragons. The 16-year-old developed a passion for broadcasting when he was in fourth grade and has, since 2014, worked with local sports and media outlets to develop his skills behind the mic. 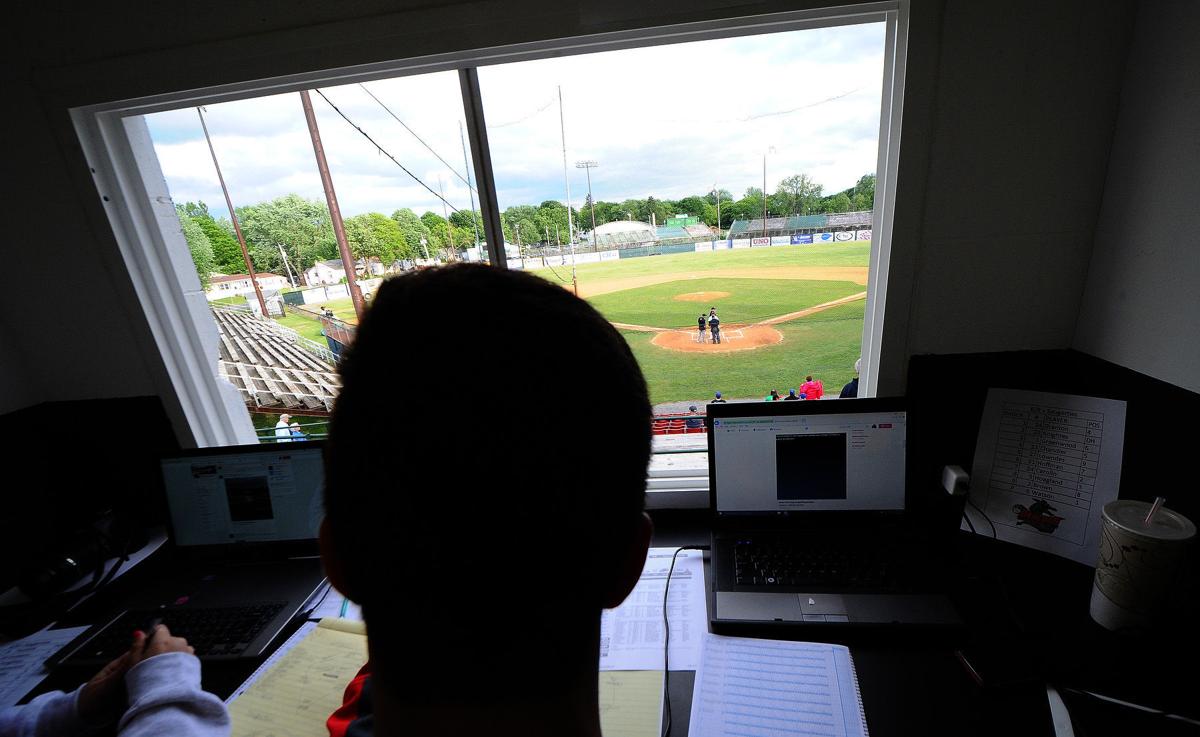 Seth Cooper, a 16-year-old South Glens Falls High School student, works in the broadcast booth at Wednesday night’s Dragons game at East Field in Glens Falls. The sophomore is the voice of the team, calling the games, and has a radio show on WCQL. 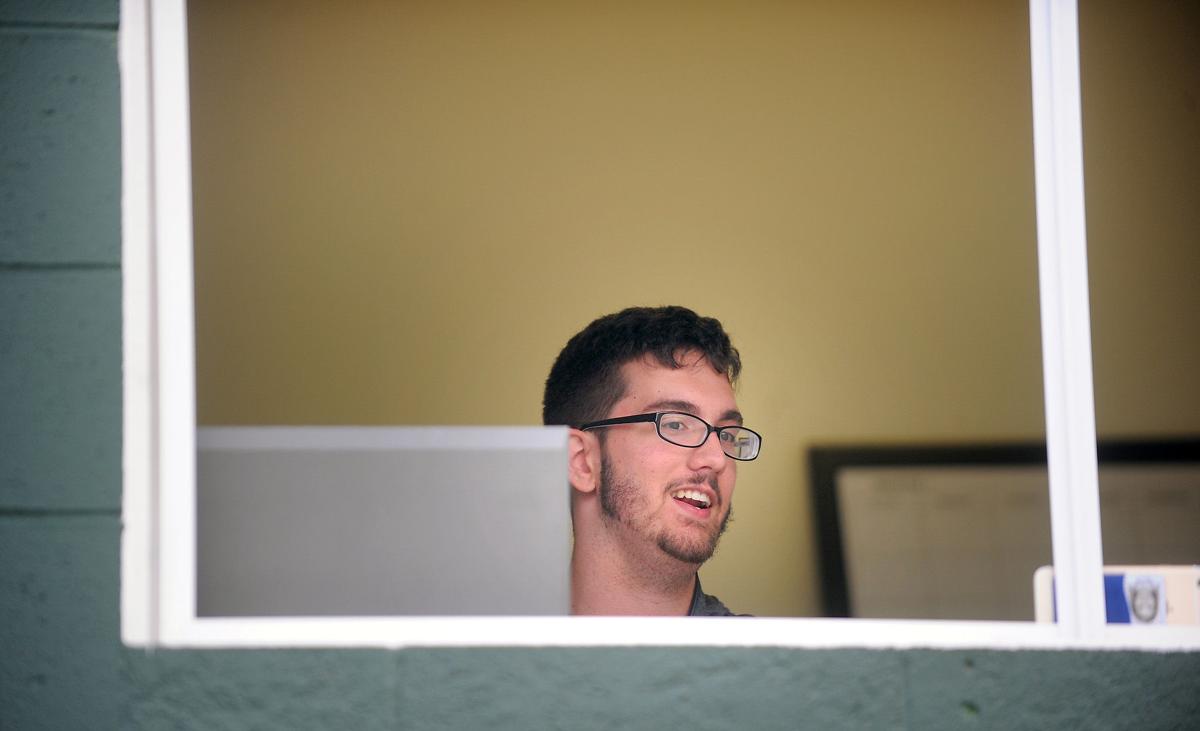 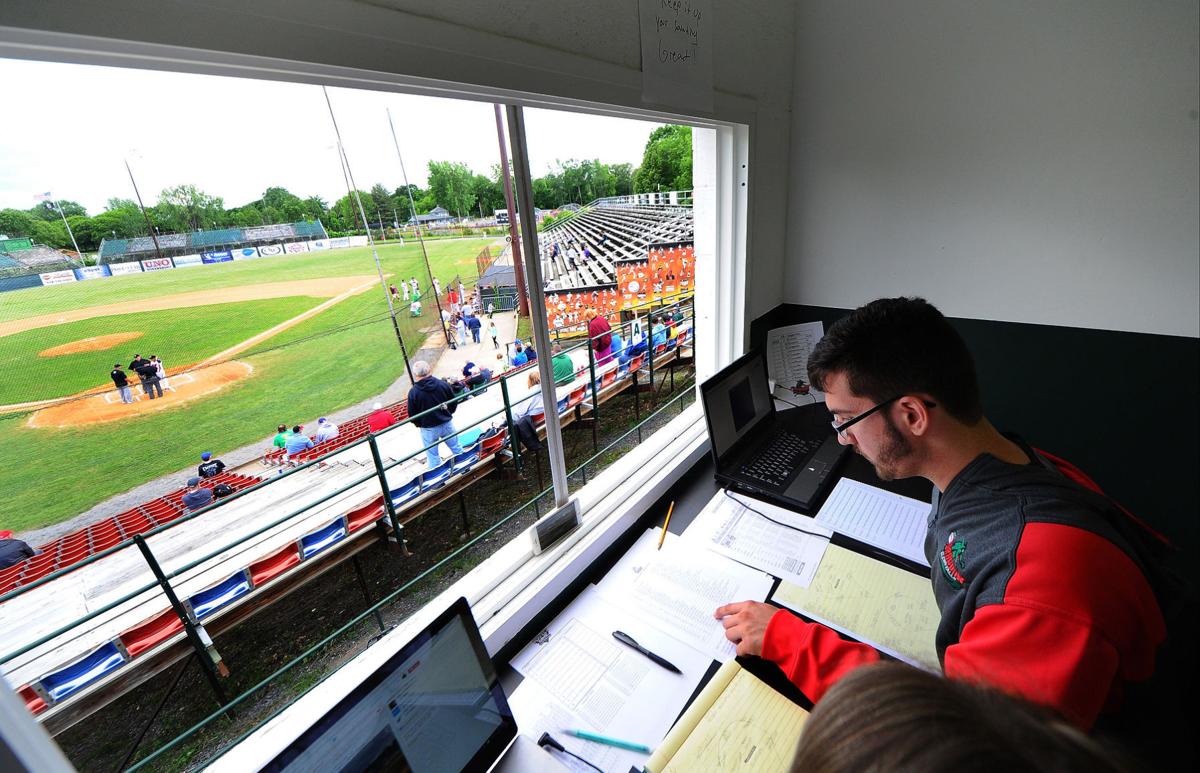 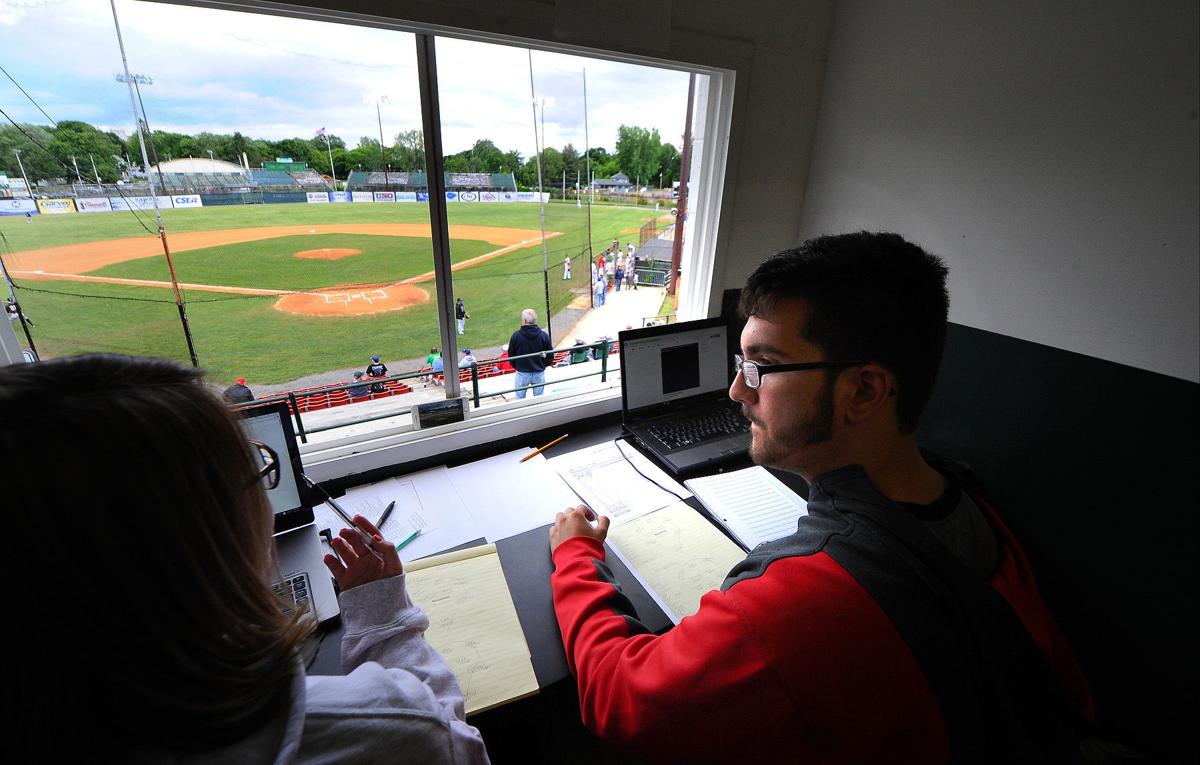 SOUTH GLENS FALLS — Seth Cooper’s resume is impressive. He has been an intern at Regional Radio Group, the Adirondack Thunder and the Glens Falls Dragons. He has a weekly show on WCQL, is the announcer at the Dragons’ games, is a contributing writer on sports websites, and mixed music for the Thunder.

“Call me an intern-holic, if that’s a thing,” Cooper said. “I like to learn.”

Cooper has been doing just that, latching on to every opportunity he can to pursue his dream of one day becoming a sports broadcaster for an NHL or MLB team — preferably the Sabres or the Mets.

It’s a passion he has had since he was in fourth grade and, irritated by what he deemed sub-par commentating on an NHL video game, muted the TV and started calling the game himself.

He googled sports commentating and stumbled upon the names of some of the greats — Mike Emrick, Pat Summerall, Marv Albert and Harry Caray, to name a few.

“I didn’t know it was a serious profession,” he said. But once he realized it was a career choice, he started researching it.

By seventh grade, when he was assigned a career fair project, Cooper had no doubt whom he wanted to interview.

“I found myself through Dan Miner,” Cooper said, referring to the Regional Radio Group station manager and WCKM program director and on-air personality.

The two met in the press box at an Adirondack Phantoms game. At the end of their talk, Cooper said Miner told him if he ever wanted to stop by the radio station to check it out, he was welcome to.

So, during Thanksgiving break from school in 2012, he called and asked Miner what time he started. The next morning, Cooper was there at 4:30 a.m. to learn the ropes.

Cooper was an intern at the station for two years, until he was old enough to get working papers and was hired on as a part-timer, Miner said.

“What better way to learn how to do a live sports show than to just go out and do it?” Miner said. “To have this kind of education as a 16-year-old, you can’t put a price on that.”

Cooper was born with cerebral palsy, a neurological disorder that affects body movement, muscle coordination and balance — something you might not be able to tell meeting him casually.

But he grew up attending local hockey and baseball games with his family, and loving both sports.

His father shared stories about what East Field was like when he was a kid.

Now, Cooper looks out over the field from the press box during every game.

He started helping the team in 2013 with media-related tasks — graphics and updating statistics on the website.

In 2014, the team needed an announcer. Cooper’s father, who helps out at the field, told him about it.

“We were looking for someone to announce and this young high school kid was interested in helping out,” said Ben Bernard, president and general manager of the Glens Falls Dragons. “We tried him on the field with a cordless mic and liked him. I said, ‘Wow, there’s something here.’”

“I’ve been in this exact spot since,” Cooper said during an interview Wednesday at the field. “I’m the voice of the Glens Falls Dragons.”

But Cooper’s duties as an intern also take him out from behind the microphone. He helps get new players settled, works with other interns on updating social media and the website, and pitches in to do whatever is needed.

“I just decided if I can’t play a sport competitively, how can I get involved in a sport with a team that will accept me? Broadcasting gave me that,” Cooper said. “It’s a way to be with the guys and tells stories and jokes and be a part of the team.”

Cooper has done a little bit of everything for the Dragons, Bernard said. “The website, information, tweeting, live-streaming, social media, graphics. That person is really valuable to an operation like this.”

“I’m not just the broadcaster and the media guy,” Cooper said. “Just like there’s not just a guy who does ticket sales; you help out wherever it’s needed.”

“When he goes to college, he’s going to be so far ahead; the other kids will have to get internships to learn what he learned at 15 or 16,” Bernard said.

“He’s already way ahead of people who are twice his age,” said Miner, of Regional Radio Group.

In the past year, Cooper has started to look to the future a bit more and now hopes to attend Full Sail University in Winter Park, Florida, which offers a 20-month bachelor’s degree program in sports marketing and media, and music production, which is another of Cooper’s passions.

He has worked with Bryan Florkiewicz, the Adirondack Thunder’s director of game operations, on the team’s pregame warm-up mixes, creating five or six 16-minute mixes.

“I have a background in audio production and it’s (mixing) underrated,” Florkiewicz said. “For a kid his age doing that level of work at the quality he does, he has great potential.”

Cooper knows his life isn’t typical for a teenager. He gets up early to start double-checking baseball statistics; responds to emails throughout the school day from new players wondering where to get their pants, or how to secure a gym membership locally; does his homework during study halls; and doesn’t get home from the ball field until long after many of his peers are in bed.

But he doesn’t mind. He loves working and learning, he said.

“The kid’s a sponge,” Miner said. “He’s so eager to learn more about everything in the business; it’s so amazing to watch somebody who is 16 years old with such a passion so early on.

“He’s got a promising future,” he said.

Rhonda Triller is features editor The Post-Star. She can be reached via email at rtriller@poststar.com. Read her blog, The Arts Life, at poststar.com/blogs/the_arts_life.

WHITEHALL — Ronald Robert Burns, 87, of Stalker Road, passed away comfortably in his home with his son, Kevin, at his side on October 5, 2021.

Dear Abby: New neighbors are quick to draw the line

DEAR ABBY: When the house next door sold, we were delighted to have new neighbors. My husband and I greeted them with a welcome gift. They ask…

How to prepare your home for cooler weather

How to change careers smartly with these easy steps

How to change careers smartly with these easy steps

Seth Cooper, a South Glens Falls High School student, is the voice of the Glens Falls Dragons. The 16-year-old developed a passion for broadcasting when he was in fourth grade and has, since 2014, worked with local sports and media outlets to develop his skills behind the mic.

Seth Cooper, a 16-year-old South Glens Falls High School student, works in the broadcast booth at Wednesday night’s Dragons game at East Field in Glens Falls. The sophomore is the voice of the team, calling the games, and has a radio show on WCQL.