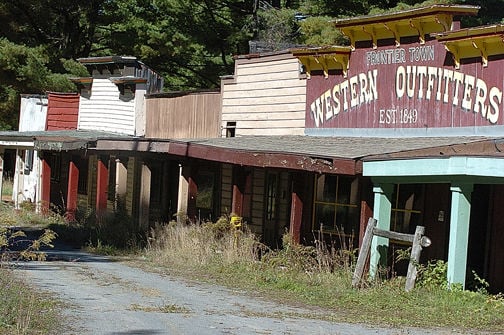 The overgrown remnants of Frontier Town in North Hudson are seen. 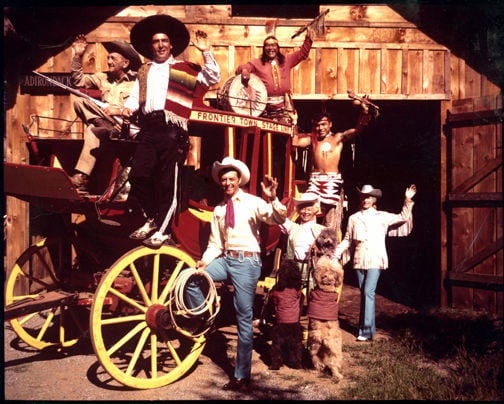 The original cast at Frontier Town is seen in this historical photo. (Courtesy of Jennifer St. Pierre) 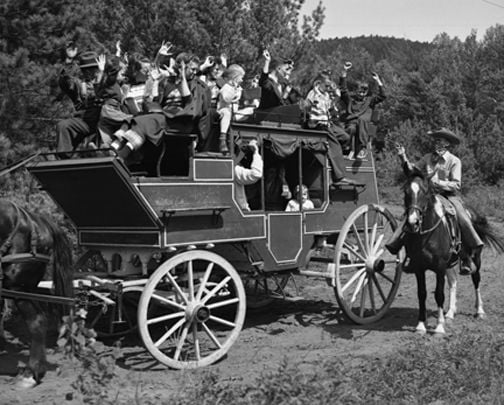 NORTH HUDSON — The sun set 16 years ago on Frontier Town, a once-popular Wild West attraction in North Hudson, but two devotees hope their upcoming book will cast a bright light on its more than 40-year history.

Jennifer St. Pierre of Crown Point and Tammy Whitty-Brown of Schroon Lake are authors of “Frontier Town Abandoned Theme Park Then and Now,” a coffee table-style volume that will focus on the heyday of the family entertainment venue and its eventual downfall into its state of extreme disrepair.

“We need to collect and save the memories. I don’t want to see those memories get lost down the road,” Whitty-Brown said.

Both women feel a kinship to Frontier Town, which St. Pierre said drew 1 million visitors in its nearly continuous run from 1952 to 1998.

A June 21, 1974, Post-Star article described the park as “a re-creation of an earlier era in American history when transportation was by real horsepower and Indians abounded.”

St. Pierre visited only a few times on field trips as a child but the images of the place are forever etched in her mind: the realistic Iroquois village; the steam locomotive, Old No. 44; Prairie Junction with its music hall and saloon; the spinning, pottery and black-smithing demonstrations. Tourists could even learn how to make bark-covered longhouses and tepees.

St. Pierre fell in love with the horses and later decided to earn a degree in horsemanship.

“It was the highlight of my childhood,” she said.

For Whitty-Brown, Frontier Town took her back to her teen years when she worked in the pony park and the warehouse, where she delivered cowboy hats and Indian vests to the various shops.

As a returning student at SUNY Plattsburgh in 2008, she did a research project on the park for her degree in history and museum management and uncovered family connections, as well.

The women planned their book to include the memories of those who felt as deeply connected as they did. In September, they held a Frontier Town Reunion in North Hudson to collect photos and oral histories from visitors and former employees. St. Pierre amassed more than 3,000 photos and seemingly as many stories.

Whitty-Brown feels the employees were like “a big family.” There were personalities like rodeo announcer Clarence Canary, Sheriff J.W. Mullis (alias “Goat”) and Dot Liberty, known for “the best pea soup,” that added to the flavor of the park.

“The different owners did amazing things and that will be brought out (in the book) but I think the backbone of the whole business was that it was a community, the people, who came together that made the magic. You can build buildings and do marketing, but if the employees aren’t on board with it, it’s not going to work. It became multi-generations of people who worked there,” Whitty-Brown said.

Interestingly, neither St. Pierre nor Whitty-Brown knew each other before last spring. At that time, St. Pierre discovered a website in which someone was requesting Frontier Town fans to send emails about their memories and he would post them on his website.

St. Pierre said the gentleman’s site received 50,000 hits and she tried to call him to ask if he would like to be part of her book project. Soon after, he took down his site and has not returned numerous requests to get in touch with her.

“I don’t think he’s extremely happy with me because I’m doing exactly what he was doing, except I’m making a book out of it. I’ve tried,” she said.

Since Frontier Town’s closing in 1998, the park has suffered from extreme neglect. Some structures still stand but have been condemned for leaky roofs and rotting floor boards. Photos show abundant foliage overtaking the property.

Frontier Town is owned by Essex County and is in litigation with the town of North Hudson and a Keeseville businessman, George Moore. Until that is settled, the future of the land is in limbo, according to North Hudson Town Supervisor Ron Moore. (George Moore is not related to Ron Moore)

If the judge rules in favor of George Moore, he would be awarded the property and that would be the end of it. If the judge rules for Essex County, it would retain ownership and could be put back up for auction, sold outright, or divided and sold as separate parcels, Ron Moore said.

“We’re just waiting. We had hoped to see business growth, that the property would be developed for some recreational uses we have coming down the pike, and we’d like to develop it for business opportunities, job growth and just to boost the economy. Whoever gets it, that’s what we hope to see,” Ron Moore said.

DEAR ABBY: After a bad breakup, a good friend and her husband offered me a room in their home. They have two wonderful teenagers. Then the pan…

DEAR ABBY: I have been married to my second husband for more than 15 years. My 30+-year-old son from my first marriage, who was born disabled,…

DEAR ABBY: My daughter received her tax refund recently. It amounted to $8,700. Approximately $5,000 is for overpaying on taxes. Approximately…

DEAR ABBY: I am a widower. I lost my wonderful wife of 35 years to heart disease eight years ago. I have had no relationships with women since then.

DEAR ABBY: While shopping with a friend recently, I was put in an awkward situation in regard to a store discount. Having served in the milita…

Tomorrow’s new moon in Taurus, the sign of money, is among the year’s luckiest days for setting financial and material intentions. Those invit…

Each of us is born from a mother whose being remains etched on our very essence. This Mother's Day lands on the first full day of Venus in Gem…

Deals were made. At the time, it seemed fair enough. Or maybe you knew it wasn’t, but it was the best you could do given your negotiating posi…

As tensions line up between Venus and Jupiter, thoughtful work is unlikely to flow with a regularity that can be counted on. Inspiration rushe…

Tips for heading back to school during the pandemic

The overgrown remnants of Frontier Town in North Hudson are seen.

The original cast at Frontier Town is seen in this historical photo. (Courtesy of Jennifer St. Pierre)