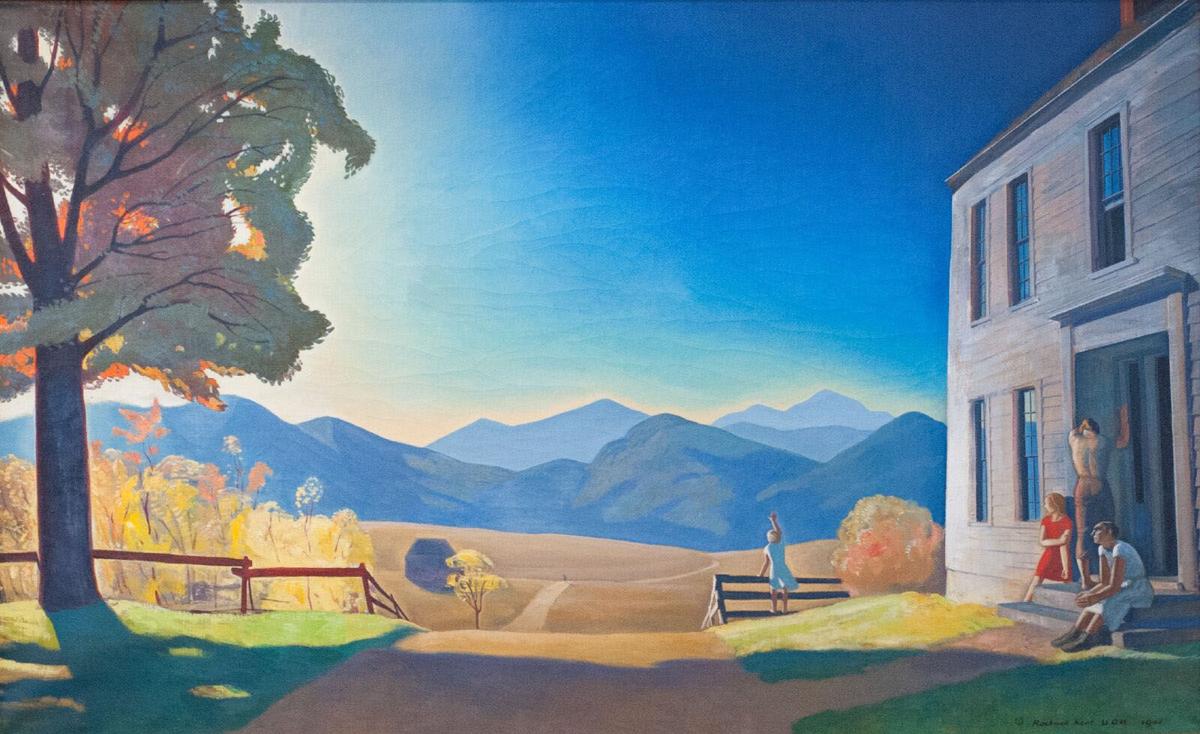 'December Eighth' by Rockwell Kent (American, 1882-1971), 1941, oil on canvas, is part of an upcoming Hyde Collection exhibition showcasing the artist's prints, ceramics and paintings. A Member Opening event will be held Saturday, April 7, and the exhibition will open to the public on Sunday, April 8. 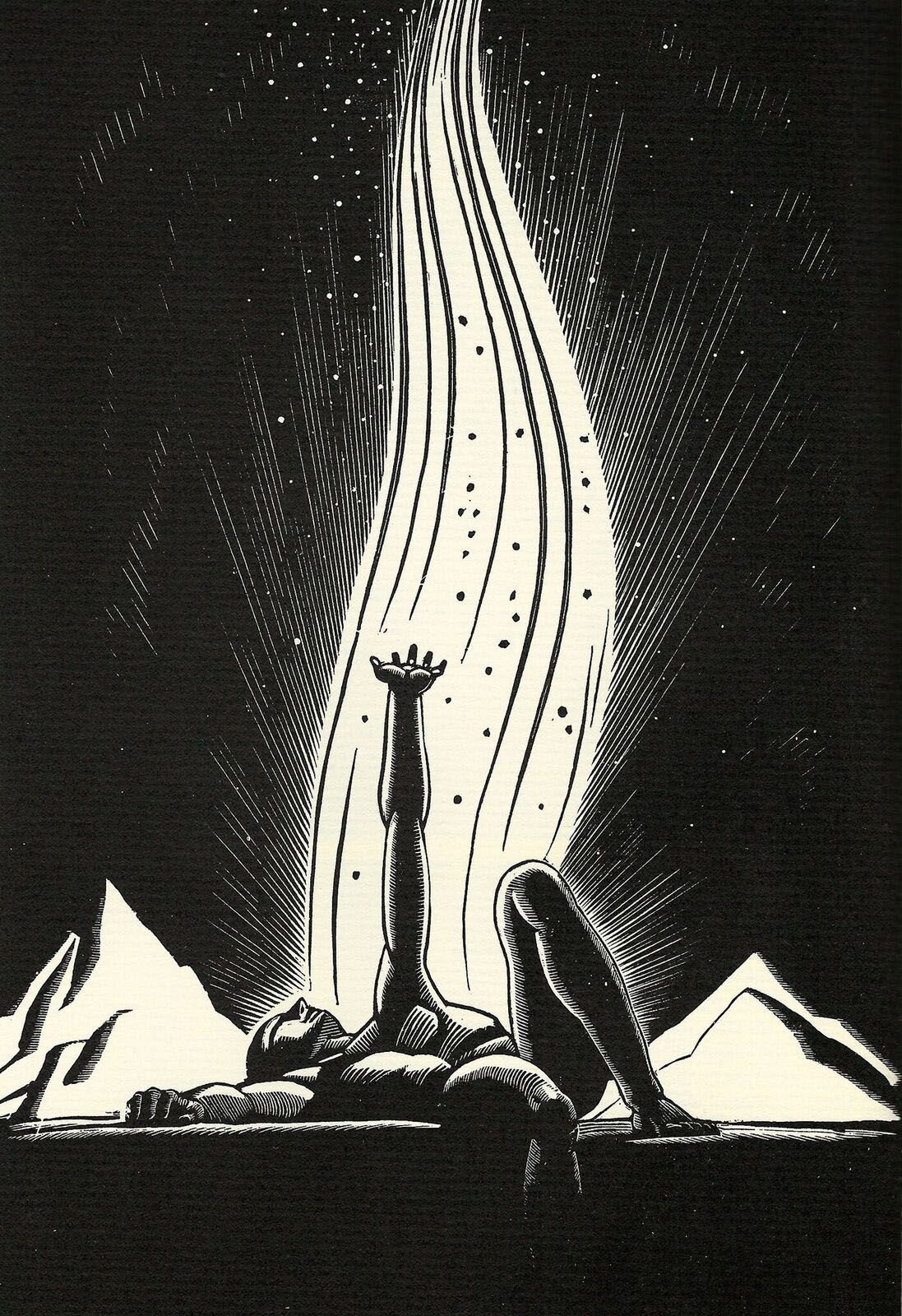 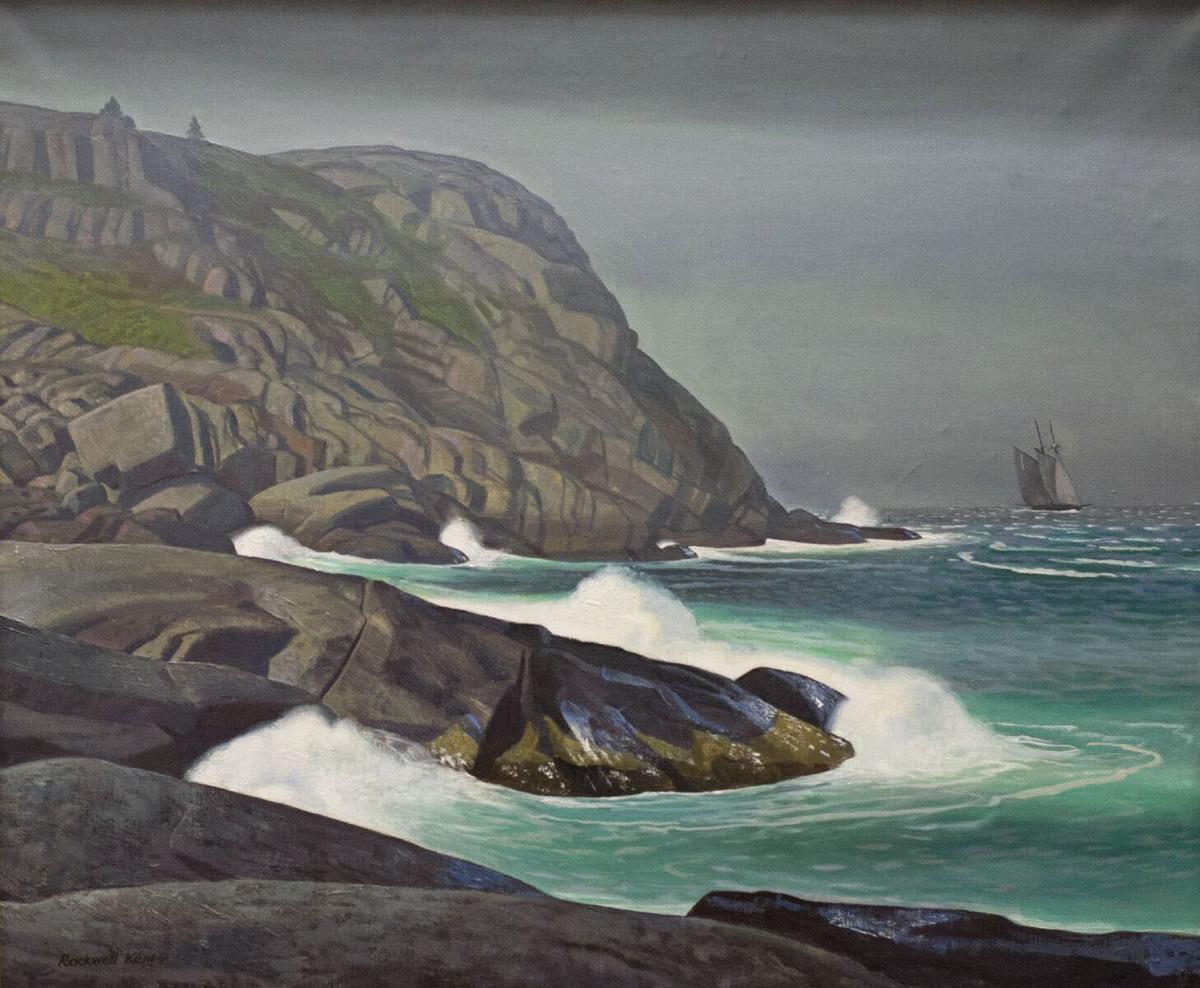 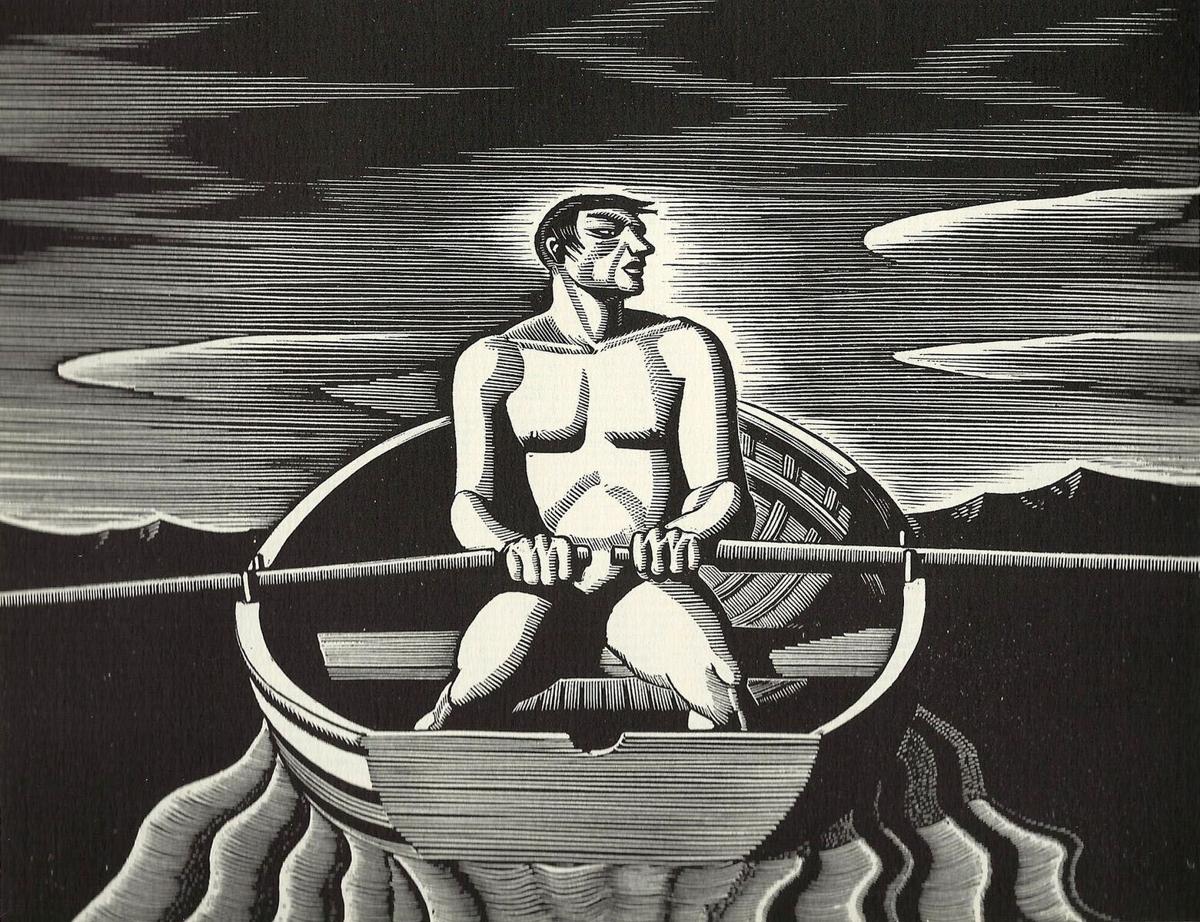 To imagine exploding primordial images of the cosmos against a stark natural wilderness is to imagine the strong monumental forms of man bursting forth against a blackened, often star-speckled sky.

And to imagine, perhaps to dream such visions, is to pass through the diaphanous veils of an obscure universe; it is to experience the works of artist Rockwell Kent (1882-1971).

“He definitely sees man against the expanse of the cosmos,” said Jonathan Canning, director of curatorial affairs and programming at The Hyde Collection, in an interview last week. “He was the most famous American artist who lived and worked here.”

On Sunday, April 8, The Hyde Collection in Glens Falls will open two exhibitions of the acclaimed artist’s works in three mediums: prints, paintings and ceramics.

The exhibitions, running until July 22, include “Rockwell Kent: Prints from the Ralf C. Nemec Collection” with 52 prints and a selection of ceramics by Kent; and “A Life and Art of His Own: Paintings from North Country Collections,” featuring 37 paintings drawn from Plattsburgh State University’s Art Museum as well as private collectors throughout the North Country.

According to Canning, there hasn’t been (in quite some time) a survey of Kent’s work as comprehensive — dating from 1905 to the late 1950s — as the upcoming exhibition at The Hyde, which he attributes in part to Long Islander Nemec and his extraordinary collection of Kent’s prints.

“He has the largest print collection in the world,” Canning said.

His political views often put him at odds with many during the McCarthy era.

“He was a great patriot and very vocal about his strong belief in social rights,” Canning said. “That led to Kent being labeled a socialist, making him a controversial figure.”

Much to the dismay of his mother, who wanted her son to live a more genteel life, Kent dropped himself into the wilderness, often traveling to the far reaches of the world’s harsh landscapes, like Alaska, Newfoundland, Greenland and the waters around Tierra del Fuego in a small boat.

Understandably so, his works, contrasting man against the wilderness, became extensions of the often bitterly cold and bleak climes he found among the faraway mountains he explored.

“Americans were simultaneously in awe of nature’s power and confident of their ability to harness it to build a better future,” said Canning. “He was a very fit man; he could trudge through the wilderness and survive. He had a very positive belief in the power of man to alter and adapt.”

When Kent found his way to the Adirondacks — Ausable Forks, building Asgaard Farm with views of Whiteface Mountain and the surrounding High Peaks, where he lived for 43 years — he learned fishing, sailing and built his mother a home.

“He became a master carpenter,” said Canning, adding that because of that, he intricately carved his wooden print blocks.

This week Canning has been busy preparing, as he does with each new exhibition at the museum. It often starts with a plan and sometimes a scale model of each exhibition space to visualize how the pieces fit together. And then there is the task of finding the perfect paints for the walls that will hold the art.

For the Kent exhibition, one area is keeping the purple from the Mucha exhibit, one area will be teal with grey in it, and then there is a “green/blue” for the winterscapes.

“A lot of time, we are looking at the works. We paint a movable wall and roll it into the exhibition,” he said. “The gallery has LED lights and color looks different.”

But even with the pre-testing of wall colors, Canning said colors never quite come out the way they envision them. And once the art is placed on the color, that can change it as well, he said.

Kent studied architecture at Columbia University, painted under William Merritt Chase at Shinnecock Hills School and studied painting with Robert Henri at the New York School of Art with classmates that included George Bellows and Edward Hopper, both represented in The Hyde’s permanent collection.

Later in his career, he illustrated books, including “Moby Dick” and “The Complete Works of William Shakespeare.”

Canning said there is a history of Kent at the Hyde.

“The last Hyde Kent show was in 1974, after his death in 1971,” he said. “Kent was so important for the region and he is a model of what one can do living in the North Country. He lived the majority of his career in Au Sable Forks and he really was this incredible national figure.”

The following events are scheduled for Rockwell Kent: Prints from the Ralf C. Nemec Collection and Paintings from North Country Collections exhibitions:

Ralf Nemec speaks about his collection. There will be light refreshments. Be among the first to see the exhibition at the Member Opening. If you're not a Hyde Collection member, pay the museum admission, plus a $5 fee to experience Member for a Day. If you decide to become a member, the money is deducted from your annual membership fee.

Inspired by the Rockwell Kent exhibitions, yoga instructor Kate Patterson leads Art and Yoga. $10 for members and $12 for non-members.

Artist-in-Residence Betsy Krebs will lead the Open Studio: Rockwell Kent and Print, a small-group instruction. $10 for members and $12 for non-members.

Acclaimed writer Marilyn McCabe returns, leading the popular Writing Workshop: Seeing with Words, with a focus on the Kent exhibitions. Participants will be guided through a series of writing and editing exercises inspired by the art. Perfect for all experience levels and art enthusiasts interested in writing poetry, short stories and memoirs, as well as visual artists looking to improve how they write about their art. $25 for members and $35 for non-members.

Art expert and University of Maine associate professor Justin Wolff offers a lecture about Rockwell Kent and his works. In collaboration with SUNY Plattsburgh, The Hyde Collection will host alumni events, celebrating the exhibitions and the college's ties to Kent.

DEAR ABBY: A friend of 35 years recently accused me of exposing her and her mother to COVID. She told me she thinks I did it on purpose becaus…

DEAR ABBY: My tattoos are destroying my marriage, and I just don’t understand why. I’m a 56-year-old elementary art teacher and the father of …

DEAR ABBY: My wife and I are both recently retired. Our 19-year-old daughter lives 100 miles away at college. My wife has an elderly mother. M…

DEAR ABBY: My ex-husband was the product of an extramarital, interracial relationship. Both of the parents who raised him are white, and he ha…

DEAR ABBY: My husband’s dad, “Adam,” is very mellow and can talk to anyone. His mom, “Eve,” is friendly, but a little more reserved.

DEAR ABBY: My best friend (since we were babies) and I are having a disagreement. She had two kids when she was 16 and 17 who are now in their…

In days of old, when people used to drink in bars, at the end of the night, the bartender would make a last call for alcohol. Eyes would shoot…

The first day after the new moon in Aries highlights the steps needed for goal-getting. Habits we desire are built just like our established h…

The Venusian year is 225 days, so, compared with Earth, the goddess planet stays fewer days in each sign on her annual rounds. You could say t…

'December Eighth' by Rockwell Kent (American, 1882-1971), 1941, oil on canvas, is part of an upcoming Hyde Collection exhibition showcasing the artist's prints, ceramics and paintings. A Member Opening event will be held Saturday, April 7, and the exhibition will open to the public on Sunday, April 8.