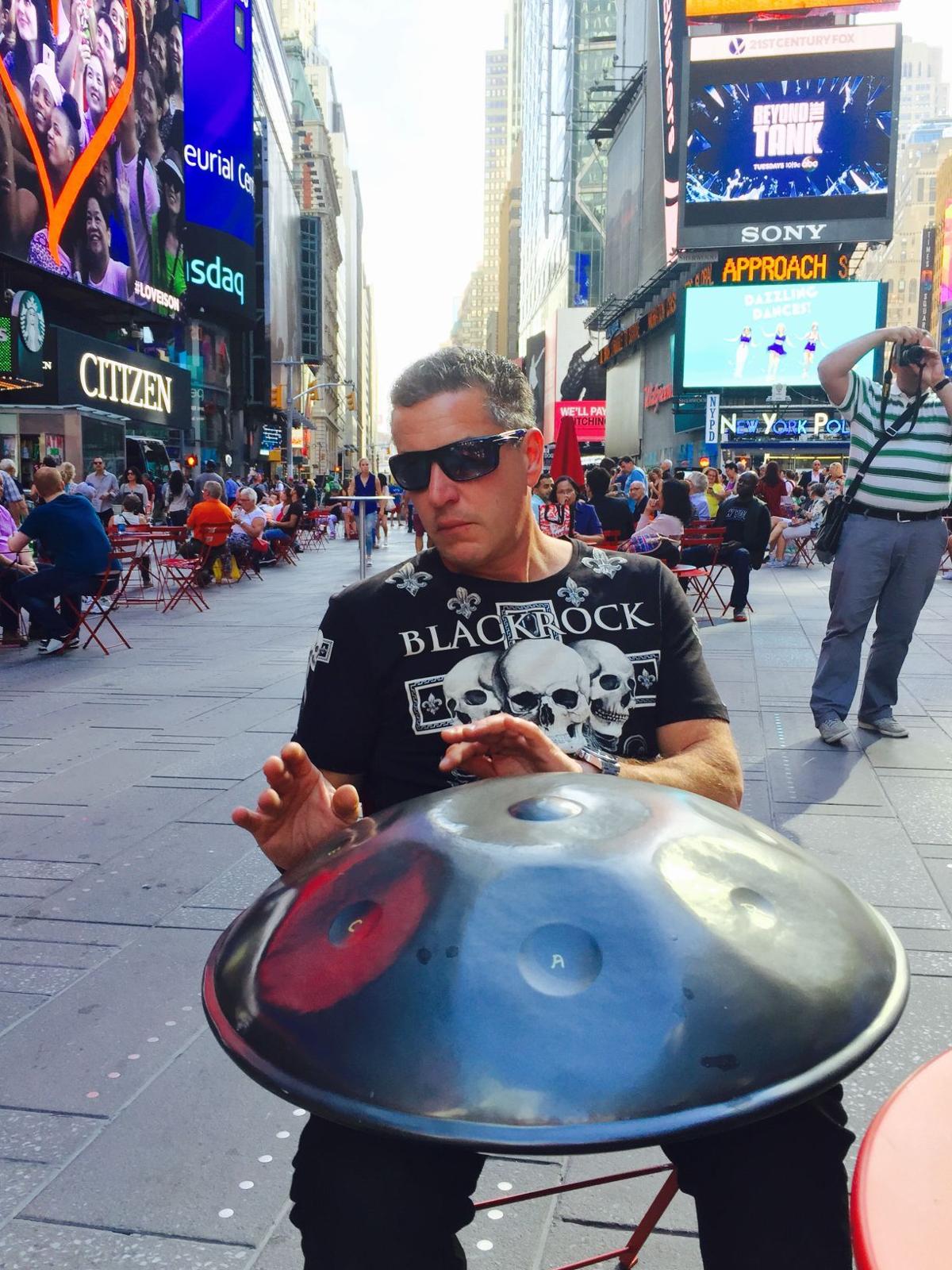 Stephen Metivier, aka OGKush the Alien, performs on the Bali steel pan, or hang, drum last week at Times Square in New York City. Metivier is celebrating the release of two CDs on Friday at the Red Church on Garfield Avenue, Glens Falls. 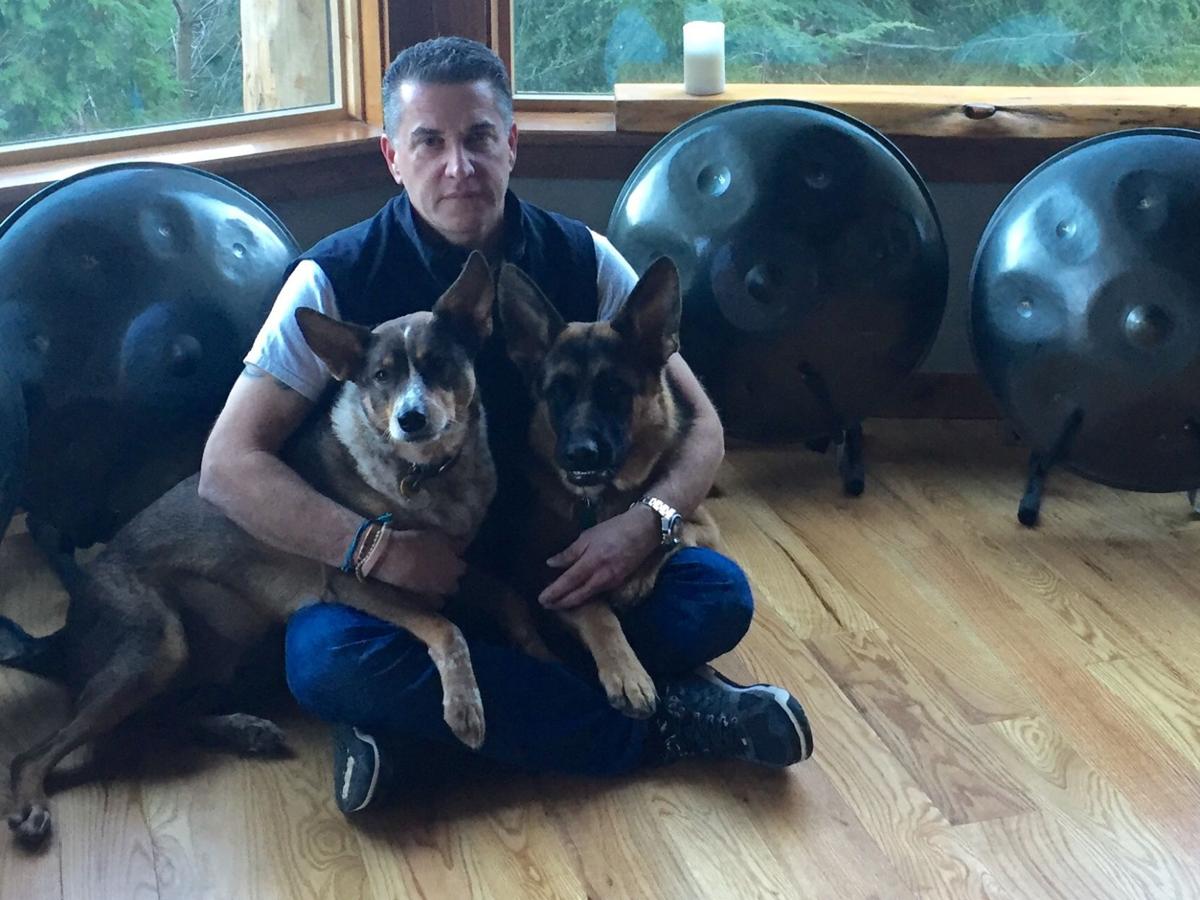 Stephen Metivier is seen at his Queensbury home with his dogs, Carma and Mitch, in front of his hang drums.

QUEENSBURY  Stephen Metivier was traveling in Amsterdam when he heard a sound he couldn’t ignore.

He followed it to a man sitting on a bench, creating beautiful music with a clam-shaped instrument.

Metivier sat down beside him and listened. Then, he asked if he could try.

“He sees thousands of people on that park bench, many who ask to try it and can’t make it work,” Metivier said. “I ask to play it, he rolls his eyes.”

But when Metivier held it and started to tap his hands off its dome, he made music — a rarity for a first-timer.

“He looks at me and said, ‘You have to get one,’” Metivier recalled.

“It was the start of my journey with the drum,” said Metivier, who on Friday releases two CDs he created under the name OGKush the Alien.

The recordings feature the unusual instrument, the Bali steel, or hang, drum.

The CDs, “Taking Flight” and “Crash Landing,” were influenced by many things in Metivier’s life, he said, but especially watching “Close Encounters of the Third Kind” in the late 1970s.

“They really went out there with it,” he said, shaking his head.

So, his albums continue the story.

“If the alien were given a hang drum before it left for its trip to Earth, met scientists on Earth and the only way to communicate is with hang drum,” Metivier explained.

The first song on “Taking Flight” is the story of when the alien meets the scientists.

The mother ship is playing notes and the scientists are trying to figure out what it is saying.

“I use that exact premise,” he said.

Metivier is a longtime drummer, playing most forms for 40 years. While remodeling his home, he built a drum room in his finished basement, with his original set from 1982 and an array of other instruments.

“I’ve been tapping on my kitchen table and steering wheel my entire life,” he said.

The hang allows a percussionist to play more than just a beat.

“This instrument finally gives drummers the opportunity to play a melodic song and not just a rhythm,” he said.

The drums are hard to come by, though.

The Bali steel pan was developed just a few years ago by Chris Andersen, a Rosendale (Ulster County)-based instrument maker.

Traveling in Bali, Andersen started working with metalworkers in a village to perfect the steel pan, a reworking of the earlier hang drum.

After years of production, about 30 instruments are made a year and the wait lists is “endless,” Metivier said.

Metivier wrote a letter to Andersen and, on his 46th birthday, met the instrument maker. He now owns six, each on a different scale.

“That’s another reason I want to do music — because I have access to six priceless instruments,” he said.

Metivier spent about two and a half months working on the two instrumental CDs, but jokes they took a lifetime to create.

With influences from all aspects of his life — one of his dogs barking, a church bell pealing — the music is almost autobiographical, if the listener knows Metivier.

For everyone else, though, the music is ideal for meditation, said Metivier, who focuses on healthy living with his wife, Evie Metivier.

“I want to put out authentic music, inspirational music, music that inspires you to do a bucket-list item, to go to bed early, to turn the TV off, to make your own music,” he said.

“It’s pure, authentic music that can be enjoyed by anyone,” he said.

Rhonda Triller is features editor at

She can be reached via email at rtriller@poststar.com.

Stephen Metivier releases his CDs at Hang with An Alien, a double CD release party, at 7 p.m. Friday at the Old Red Church Music Venue on Garfield Avenue in Glens Falls. The party celebrates the release of percussionist and hang musician Metivier's CDs, "Hang With An Alien: Volume 1 — Taking Flight" and "Volume 2 — Crashing Landing."

The event includes coffee from Spector Coffee, a wine tasting by The Wine Merchants, hors d'ouevres from Bistro Tallulah and a dessert bar sponsored by D'Ella Auto Group.

A donation of $10 is requested, with proceeds going to local charities.

You should buy these items at yard sales

You should buy these items at yard sales

DEAR ABBY: My college senior daughter, “Lisa,” insists on inviting her “significant other” to every holiday and to our home when she’s on brea…

Dear Abby: Woman spurred to action by plight of her grandkids

DEAR ABBY: I have a grandson (25) and granddaughter (22) who are both extremely overweight (300 pounds each). They not only have health issues…

DEAR ABBY: I am an active 90-year-old grandmother who every year treats my family to a week’s vacation at a beach house. We have a lovely time…

Dear Abby: Adult daughter still has to check in with parents

DEAR ABBY: I am a 30-year-old married woman. My job requires a lot of domestic travel, which I love. My parents continue to ask that I “check …

There’s a new guest in the fire sign realm of Leo, moving like he belongs there. Mars in the lion’s den recalls the legendary tale of a boy na…

Inside every new moon, there’s an opportunity to start fresh with a project, relationship or area of your life. The Gemini influence on tomorr…

Your body, clothes, home, neighborhood and everywhere you go in the world is an environment covered with great focus under the Cancer moon. Yo…

The magic question of the day: Who is this helping? If it’s only you, the next question should be: Really? Followed by: How? What’s really hel…

Vaccination rates lag in some states as more cities reopen

Stephen Metivier, aka OGKush the Alien, performs on the Bali steel pan, or hang, drum last week at Times Square in New York City. Metivier is celebrating the release of two CDs on Friday at the Red Church on Garfield Avenue, Glens Falls.

Stephen Metivier is seen at his Queensbury home with his dogs, Carma and Mitch, in front of his hang drums.