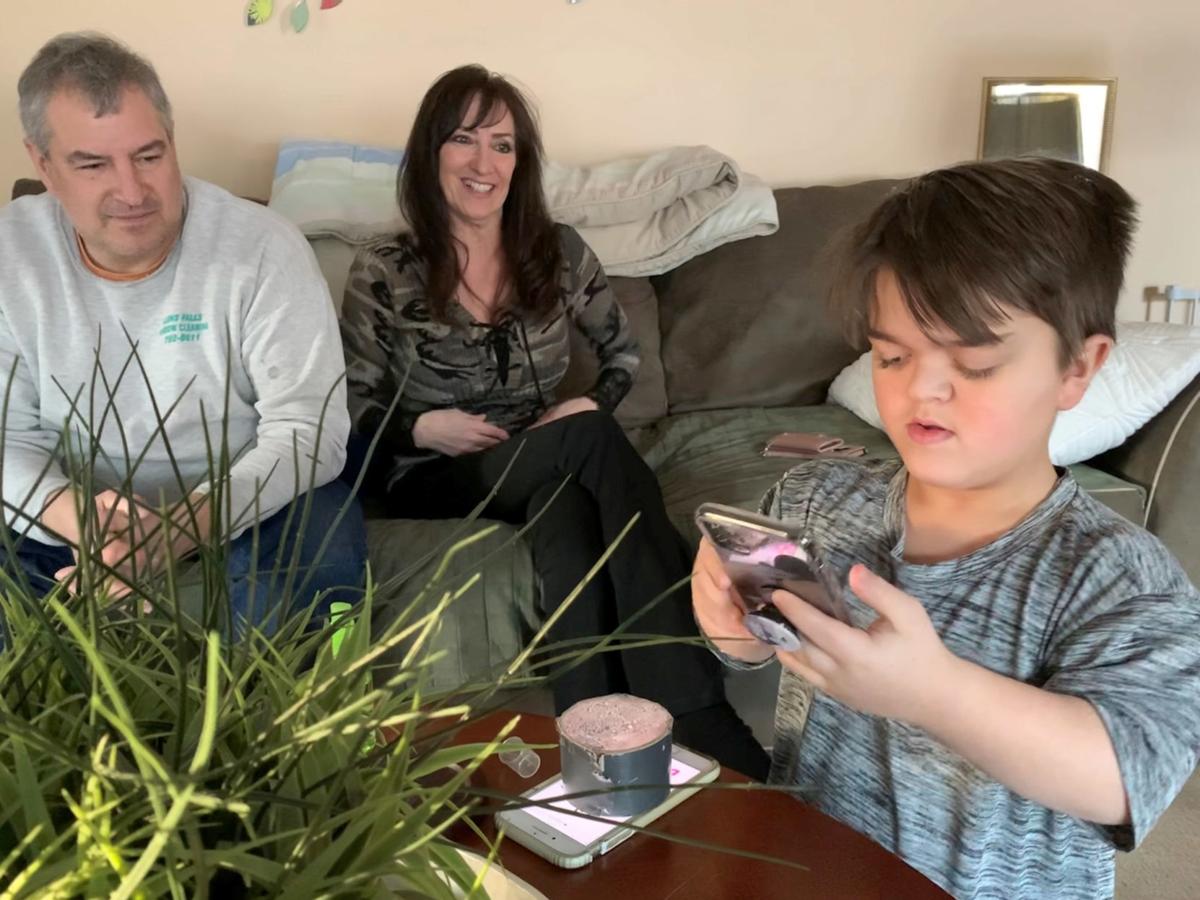 Kory Kosinski, right, plays with an app on his new phone at his Queensbury home Thursday as his parents Keith and Shirley watch. Kory, who has dwarfism, is preparing for his second limb-lengthening surgery in May. 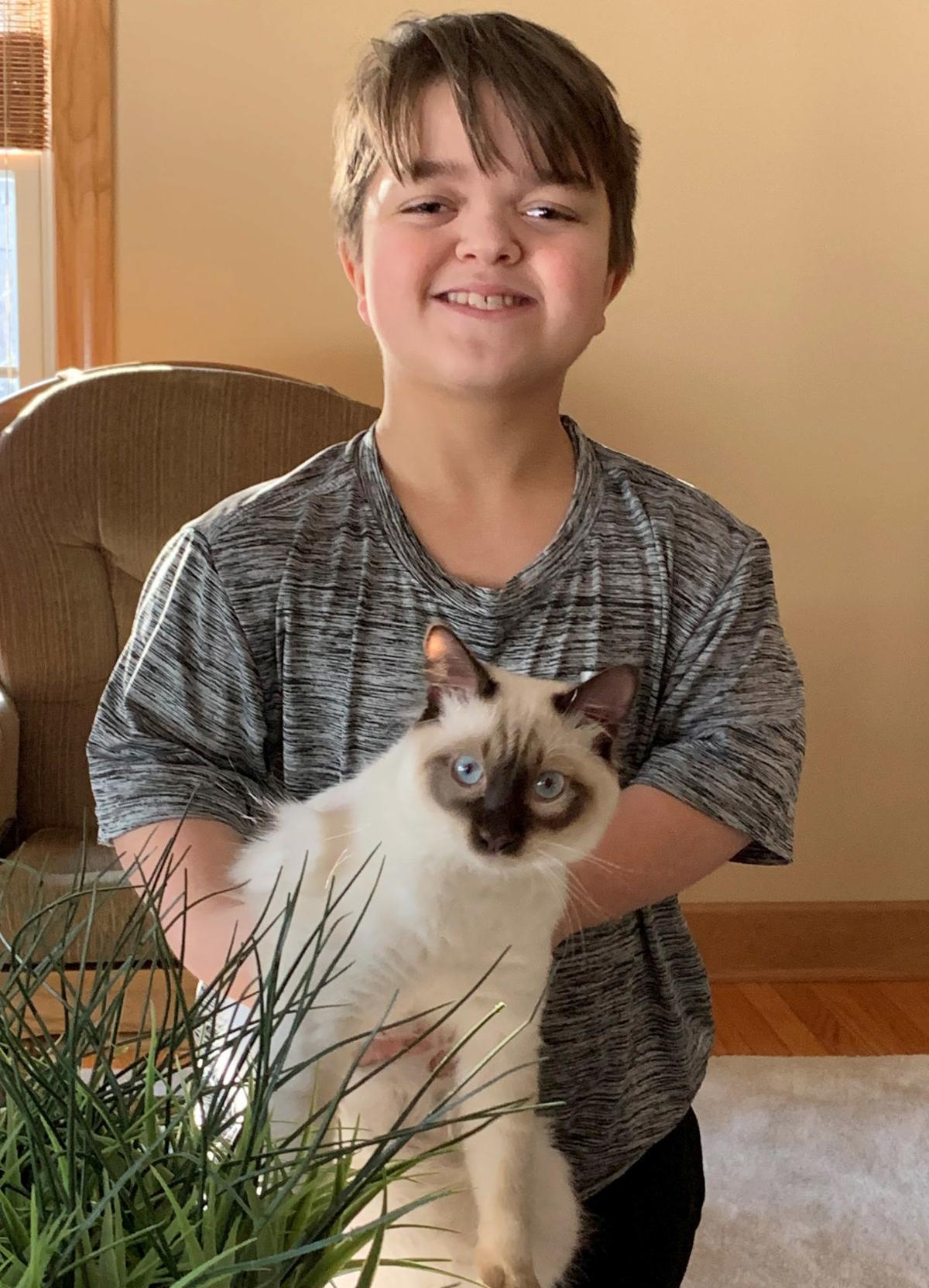 Kory Kosinski, 11, a sixth-grade student at Queensbury Middle School, poses with his cat Tobi at his home Thursday. Kory, who has dwarfism, will head to Florida in May for his second limb lengthening surgery. 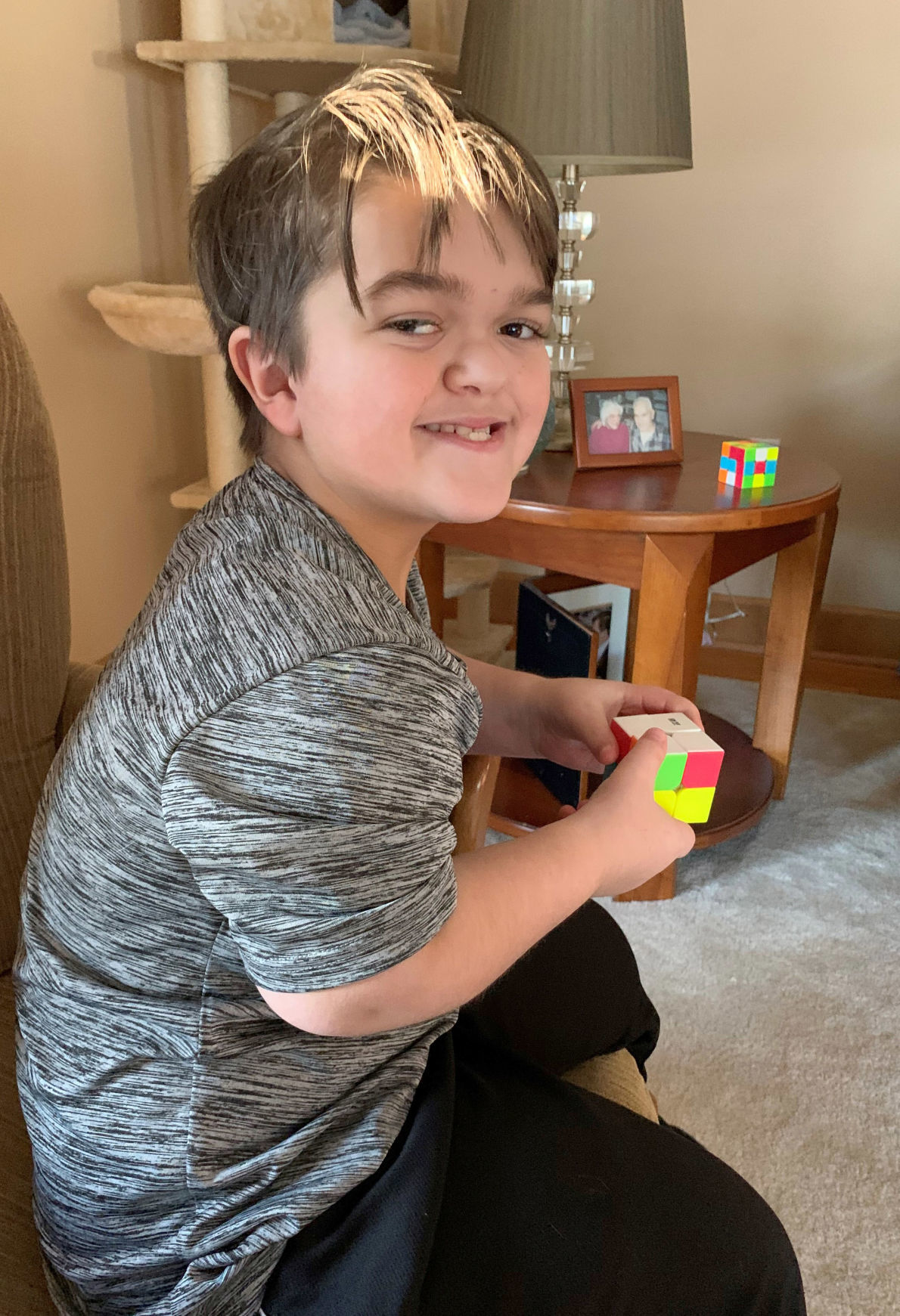 Kory Kosinski, 11, a sixth-grade student at Queensbury Middle School, fiddles with a cube toy at his home Thursday. Kory, who has dwarfism, will head to Florida in May for his second limb-lengthening surgery.

QUEENSBURY — Kory Kosinski, an 11-year-old boy from Queensbury, can’t wait to return from his next limb-lengthening surgery.

Kosinski, who has dwarfism, will gain another 6 inches of length on his legs during two surgeries scheduled for May 5 on his tibias and May 21 on his femurs.

Kosinski, a sixth-grader, is 4-feet 1-inch tall now and is excited to be taller, but he is looking forward to coming home for another reason.

“Hamsters,” Kory said with a smile at his house Thursday.

“He got a hamster for Christmas and it died. He had it 60 days,” said his mother, Shirley Kosinski. “It was his most favorite thing.”

When he returns from his Florida surgery in mid-August, his parents have promised him he can get two new hamsters.

Kory was born with achondroplasia, the most common form of dwarfism. He had his first distraction osteogenesis procedure in 2015, during which his leg bones were broken and slowly pulled apart to regenerate new bone. He gained 6 inches from that surgery, and the second will add another 6 inches to his legs.

Kory and his mother will stay in West Palm Beach, Florida, for 14-17 weeks while Kory recovers from his surgery and endures physical therapy. This time, all the equipment on his legs will be internal.

Kosinski admits it is a highly controversial procedure.

“We actually lost a few friends when they found out we went through with the surgery. They actually deleted us on Facebook, and they’re locals here,” she said.

But to her, it’s a matter of personal hygiene, independence, future employment and self-esteem.

“There are other things this surgery corrects,” Kosinski said. “It’s not just giving him length.”

This surgery — and the future surgeries he can have on his arms and face — will realign his hips and back and release soft tissue that’s not supposed to be connected. The arm surgery planned for next year will realign his elbows and give him at least 5 inches of arm length.

“He can’t reach to wipe his own butt,” Kosinski said. “Still can’t.”

And this is the first year the middle-schooler refuses to let anyone at school assist him in the toilet. The end result is a number of rashes due to his limited reach.

“A lot of people think dwarfism is just what you see,” she said. “It’s not. It’s all bone issues, the spine, the hips.”

Kory has a severely underdeveloped mid-face and his upper palate is behind his lower teeth, which causes breathing problems and sleep apnea. He will be able to get face surgery in the future.

He is just shy of 49 inches now. When he returns from this surgery, he will be 55 inches.

In the end, Kory will gain 18 inches from all his surgeries. He is expected to stand at 5-foot-8-inches when the surgeries are done. An average adult male with dwarfism reaches 4-feet to 4-feet 4-inches tall.

“That is huge, meaning no adaption,” Kosinski said. “No adaption for car, no assistance on public toilets, no special tools to wipe your bottom, no asking someone to get an item off the shelf for you. These are all improvements in his life.”

Are there special people in your community worthy of recognition? Contact Gretta Hochsprung with good news at ghochsprung@poststar.com or call 518-742-3206.

The Kosinski family is accepting donations to help defray the costs related to Kory’s surgery, like travel, hotel bills, co-pays and missed work.

Bottle donations can be made at:

Donations can be made at any Glens Falls National Bank under the name Kory Kosinski/Dwarfism Limb Lengthening/Correction.

The GoFundMe link is http://gf.me/u/s3tft8

People who work from home give advice

People who normally work from home offer tips and challenges for telecommuting.

QUEENSBURY | Tears welled up in Shirley Kosinski’s eyes as she peered through the door of her son’s classroom.

Seven-year-old Kory Kosinski, a Queensbury boy whose family in the spring was raising money to help defray costs of bone-lengthening surgery, …

My very first job was working as a carhop, and no, we didn't wear roller skates.

Queensbury to present light-hearted musical for the whole family

High school musical season is here and area schools are offering their takes on some classics.

The Battenkill Chorale will perform its 25th anniversary concert at 3 p.m. Sunday at the Arthur Zankel Music Center at Skimore College.

Joseph Cutshall-King has released the second volume of his "Over My Shoulder" book series.

Kory Kosinski, right, plays with an app on his new phone at his Queensbury home Thursday as his parents Keith and Shirley watch. Kory, who has dwarfism, is preparing for his second limb-lengthening surgery in May.

Kory Kosinski, 11, a sixth-grade student at Queensbury Middle School, poses with his cat Tobi at his home Thursday. Kory, who has dwarfism, will head to Florida in May for his second limb lengthening surgery.

Kory Kosinski, 11, a sixth-grade student at Queensbury Middle School, fiddles with a cube toy at his home Thursday. Kory, who has dwarfism, will head to Florida in May for his second limb-lengthening surgery.