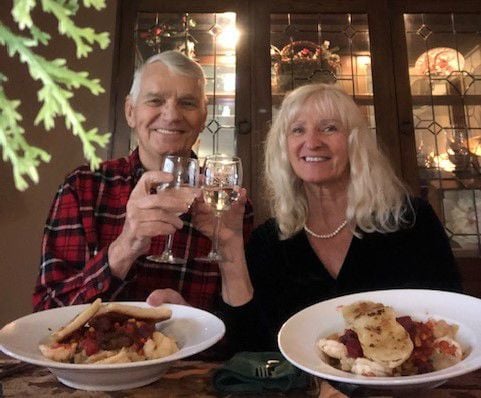 Chuck and Cindy Allen of Fort Ann celebrated their 50th wedding anniversary Saturday via a virtual party with 150 of their friends from all over the world. They also received a catered dinner courtesy of Bistro LeRoux prepared on their front lawn. 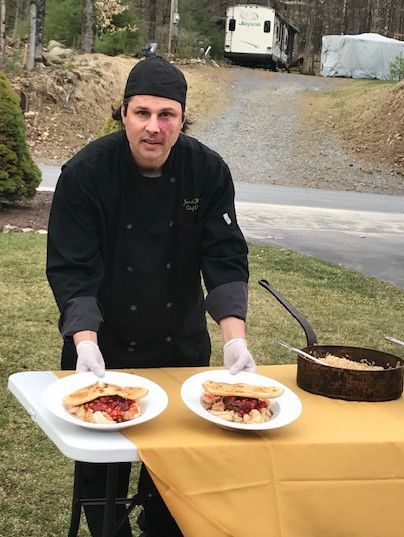 Chuck and Cindy Allen of Fort Ann celebrated their 50th wedding anniversary Saturday with a catered dinner prepared on their front lawn by Jacob Guay, the chef and owner of Bistro LeRoux.

FORT ANN — Chuck and Cindy Allen were married on the same day Apollo 13 took off.

“‘Houston, we have a problem,’ that one was launched on April 11, 1970,” said Chuck Allen, who celebrated 50 years of marriage with Cindy at their home on Hadlock Pond on Saturday.

Their kids were trying to put together an anniversary celebration for the happy couple when the coronavirus pandemic halted their plans and any hope of a party.

“My sisters and I were actually struggling for a while how to do this because they have friends all over the place, friends and family all over the country, and all over the world, truthfully,” said Brandon Allen, a meeting facilitator in Orlando, Florida.

He put his meeting skills to work and created an online Zoom videoconferencing party for his parents and invited all their friends and family to log on between 2 to 4 p.m. Saturday for what they called a “virtual-versary.”

He created several different “rooms” of people, and his parents were able to pop in and out of different rooms to socialize.

“I figured 150 people all trying to be on one screen with videos and talking at once would not go well,” Brandon said. “So when you’re at a real party, there’s different tables, you can go to the bar, you can go out in the hallway and talk to different people.”

Brandon served as the master of ceremonies and directed people to their different breakout rooms. About 70 accounts logged into the party, from places like Canada, England, Colorado, South Carolina, Florida and New York.

“I had one side of the family say, ‘Hey, can you send me to the other side, I haven’t said hello in years,’” Brandon said.

Chuck and Cindy delighted in their ability to see all their friends. Chuck is presently battling his seventh form of cancer — this time stage 4 stomach cancer. At least four of his cancers were related to his exposure to Agent Orange during the Vietnam War.

“This was a fabulous opportunity for us to see everyone,” Cindy said, choking back tears. “Because of COVID-19, and he’s so fragile, his health, that he may not ever see these people again.”

The Allens knew the virtual-versary was planned, but they were not expecting Jacob Guay, the owner of Bistro LeRoux of Queensbury, to cook them an anniversary surf-and-turf dinner on their front lawn.

The couple dined on lobster and filet mignon, risotto, salad and homemade bread.

“And we’re still eating it,” Cindy said the next day. The dinner was arranged by their daughter, Nicci. Guay refused to take payment for the meal.

This was a substantial dinner for Chuck, who endured a complicated stomach surgery and had to adhere to a liquid diet for more than a year.

“He really just a few weeks ago started eating a regular diet,” Cindy said, “so this is a huge, huge treat for him to have that kind of a meal. So it had a lot of meaning.”

Chuck said the secret to a long and happy marriage is marrying someone like Cindy, because “she’s amazing.”

Brandon said his parents’ relationship has survived war and cancer and hardships, like the loss of his young daughter, their granddaughter.

“My dad is dealing with his seventh cancer, and my mom remains just the most upbeat, cheerful, wonderful person. My dad is stoic and strong,” he said. “And I really couldn’t ask for better parents.”

Call me the good news girl. Are there special people in your community worthy of recognition? Tell me about them. Drop me a line, a tip, a note, or send a press release and photos to ghochsprung@poststar.com or simply call my desk at 518-742-3206. I look forward to hearing all your good news.

Following New York City's lead, the Bolton Community Church rings its bell every night at 7 p.m. The pastor is urging all churches with bells to follow suit.

Warrensburg is lighting up its patriotic Christmas tree to bring hope during the pandemic.

Signs of support: Schools recognize seniors on their front lawns

Teachers have been riding buses to deliver new books to every Fort Ann elementary student.

From a distance: A Queensbury fifth grader is surprised by a birthday parade.

Queensbury brothers Alex and Camden Passino made face mask straps, which they donated to Albany Medical Center in memory of their brother.

Seniors mourn the loss of their last year of high school

Local high school seniors are heartbroken but hopeful about the end of the school year.

Chuck and Cindy Allen of Fort Ann celebrated their 50th wedding anniversary Saturday via a virtual party with 150 of their friends from all over the world. They also received a catered dinner courtesy of Bistro LeRoux prepared on their front lawn.

Chuck and Cindy Allen of Fort Ann celebrated their 50th wedding anniversary Saturday with a catered dinner prepared on their front lawn by Jacob Guay, the chef and owner of Bistro LeRoux.