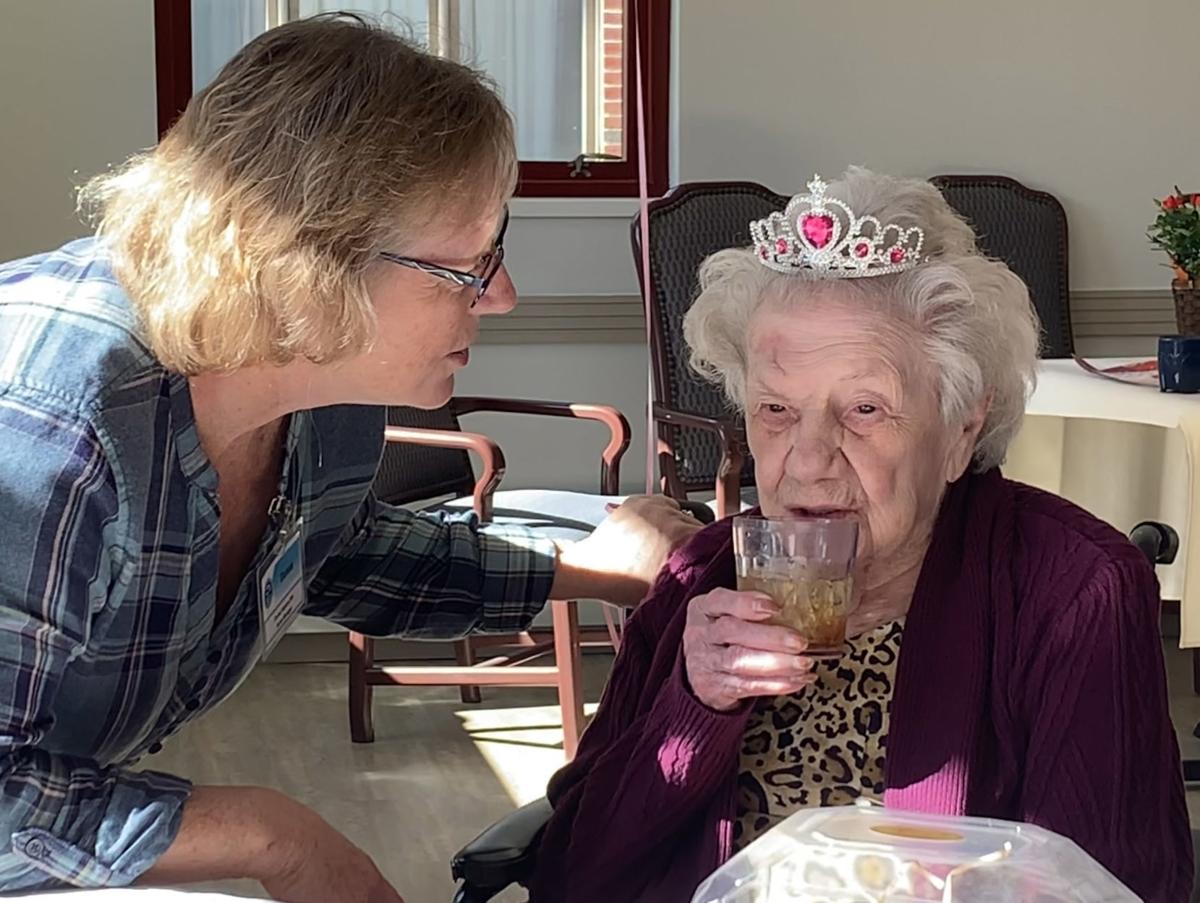 Anna Brummer, who turned 105 at Fort Hudson Nursing Center on Friday, takes a drink of Scotch handed to her by Unit Manager Donna Hopkins. 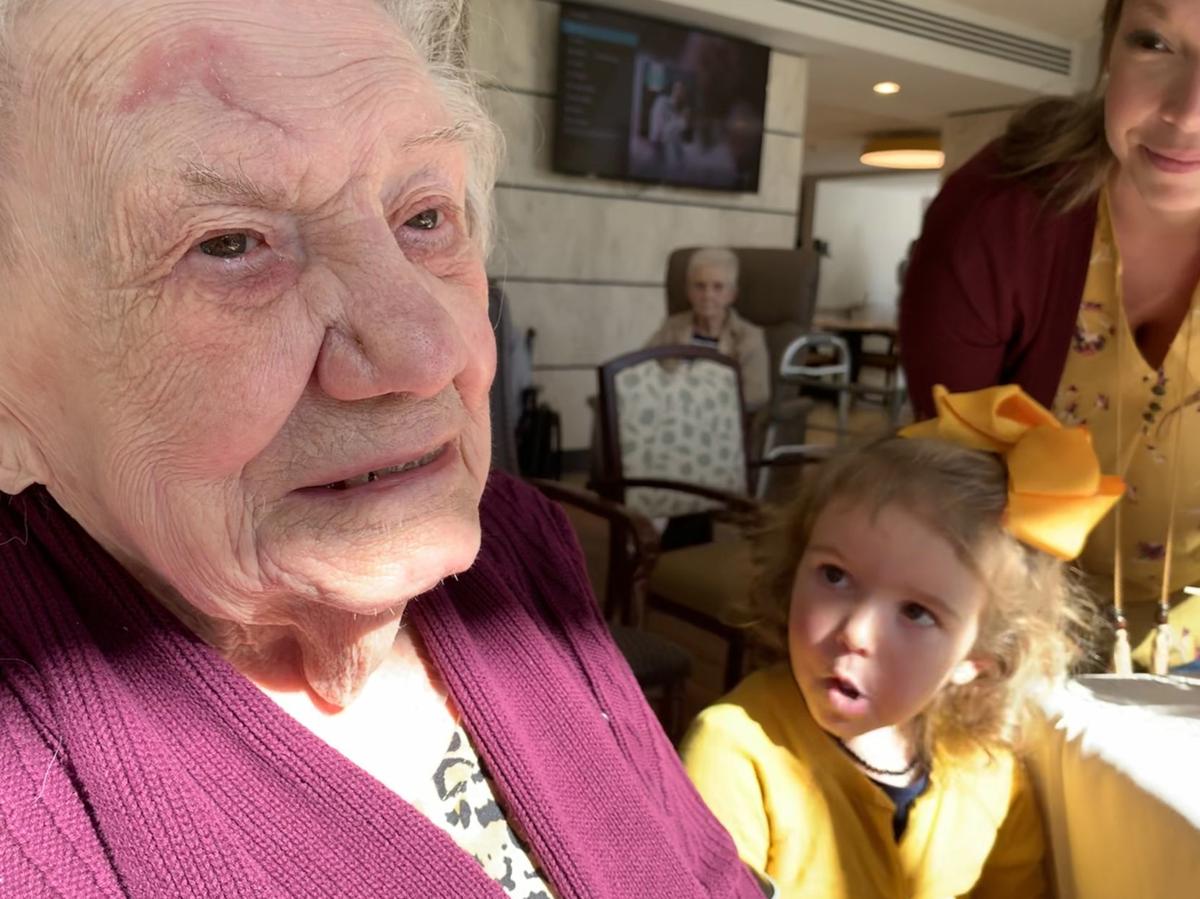 Anna Brummer, who turned 105 on Friday at Fort Hudson Nursing Center, celebrates with her friends and family, including her great-granddaughter Addie Brummer, 2, and granddaughter-in-law Katie Brummer. 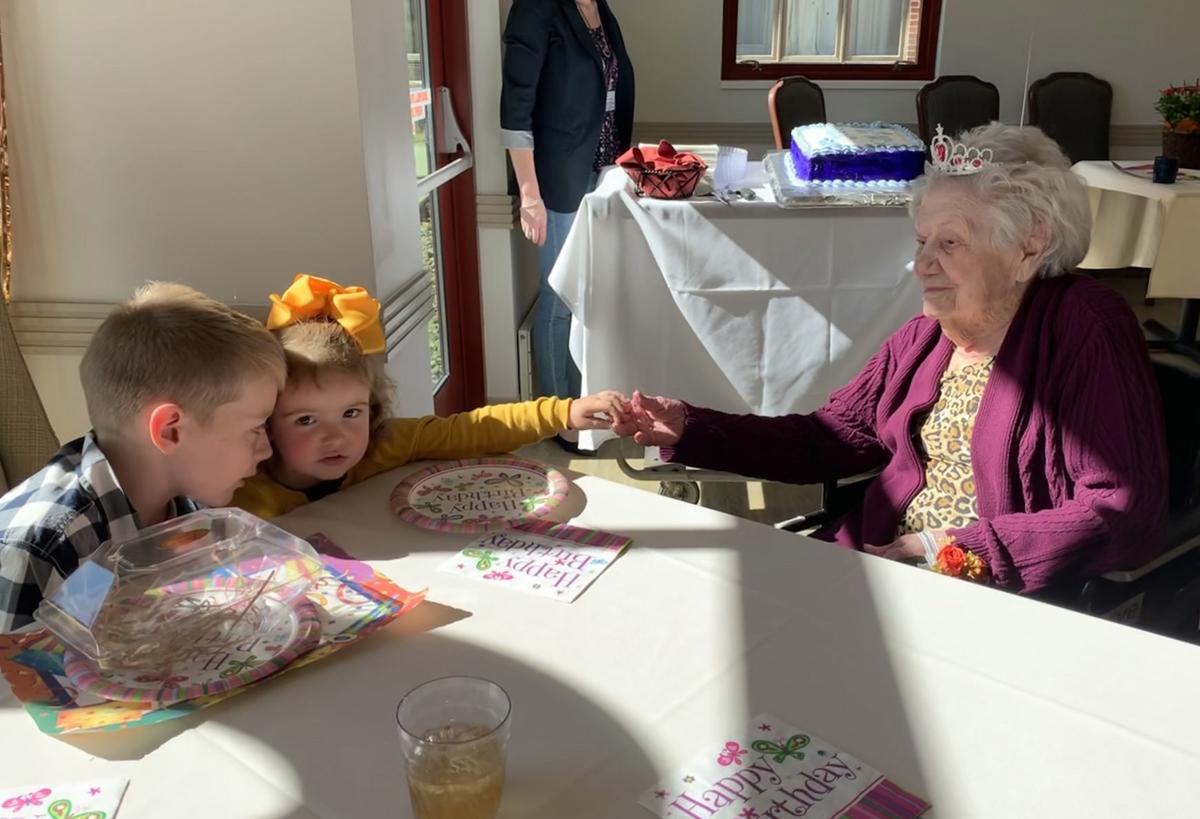 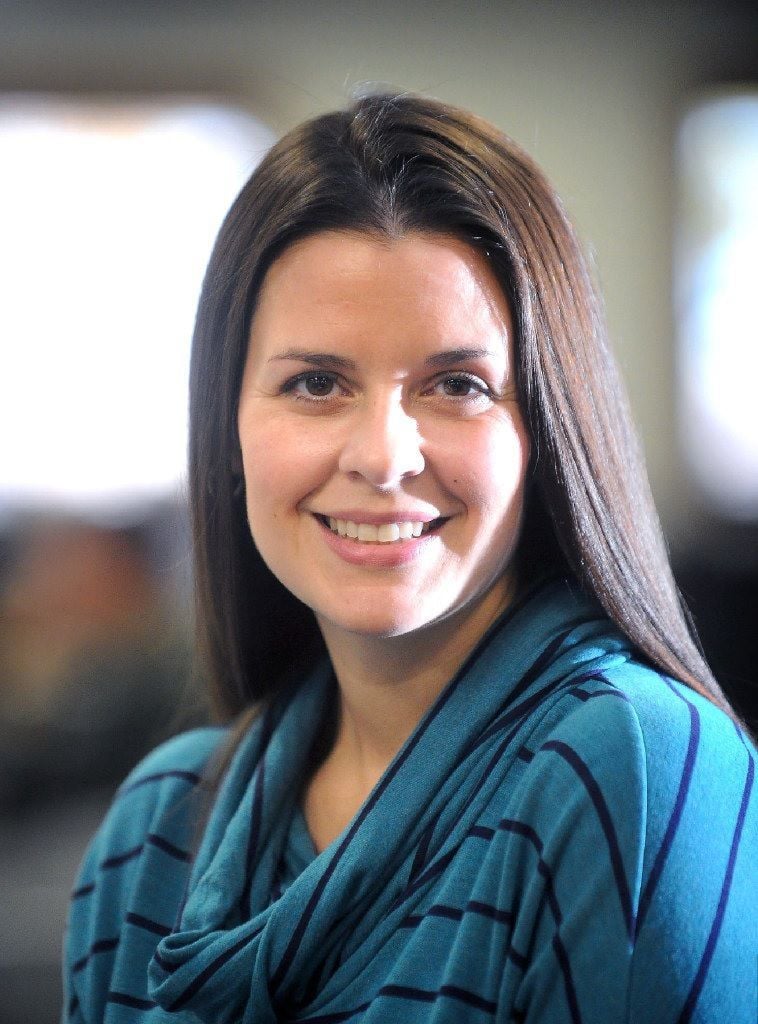 FORT EDWARD — Anna Brummer only wanted one thing for her 105th birthday.

Wearing a silver and pink tiara on her head and an orange corsage on her wrist, the centenarian sipped her glass of Scotch on Friday surrounded friends and family at Fort Hudson Nursing Center.

Brummer enjoyed a round of “Happy Birthday” and a hefty slice of cake.

“I didn’t put 105 candles on it,” said Unit Manager Donna Hopkins, “because it’s a fire hazard.”

Kids in those days didn’t play in the streets. They played in people’s houses, focused on card games like poker.

Brummer worked as a sales clerk at Kresge’s, which was the predecessor to Kmart. She made $12 a week selling five and dime merchandise.

“I liked it. It was nice to work among mostly women," she said. "They’re very nice. They appreciate you.”

She stayed at Kresge’s for more than 10 years.

She raised her own family, including her one son, Richard Brummer, on Long Island.

“I don’t want to say that my mother and father were strict, because they weren’t,” he said. “But back then, your parents told you to do something and you did it. You obeyed them. The three of us got along fine.”

After Richard went to grade school, Anna worked in the school cafeteria in Massapequa, on Long Island.

She said the secret to longevity is being nice to people.

“Keeps you young when everything’s going smooth,” she said.

But her son says it was the nightly glass of Christian Brothers Golden Sherry that kept her parents young.

“That’s what my mother and father used to do,” he said. “They’d sit up, watch the news and have a glass of wine together before they went to bed.”

Back in 1984, Richard got his parents interested in ham radio. Anna Brummer got her license at the age of 69 and is now one of the country’s longest-living amateur radio operators. Her call sign is N2FER.

Richard said his mother definitely has a will to live.

“Valuing your friendships,” he said, “and that glass of wine.”

This story was corrected on Oct. 2, 2019 to change the number of years Edwin and Anna Brummer were married from 65 years to 56 years.

QUEENSBURY — One of Hannah Delila Walter’s first memories is of young men returning from World War I.

BLOG: I should have asked

Get to know your grandparents. Ask them all the questions. And write their stories.

Gretta Hochsprung's blog: I should have asked

Our elders have a lot to impart, so it's worth asking for their stories right away, before it's too late.

Fort Hudson pours resources into care beyond the nursing home

Fort Hudson started as a nursing home, but it is now doing everything it can to help people live at home instead.

Anna Brummer, who turned 105 at Fort Hudson Nursing Center on Friday, takes a drink of Scotch handed to her by Unit Manager Donna Hopkins.

Anna Brummer, who turned 105 on Friday at Fort Hudson Nursing Center, celebrates with her friends and family, including her great-granddaughter Addie Brummer, 2, and granddaughter-in-law Katie Brummer.