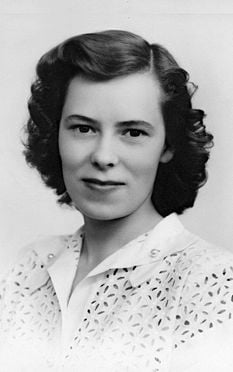 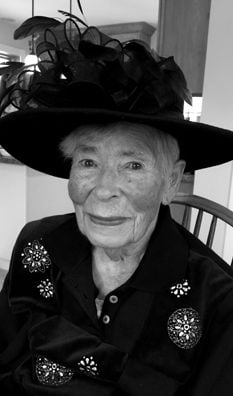 GANSEVOORT — Mary “Betty” Maxine Jinks, 98, of Selfridge Road, in Gansevoort, passed away peacefully on Sept. 29, 2016 at her daughter's home.

Mary attended the Methodist Episcopal Church as a child in Ireton, Iowa and was a member of the Okoboji Epworth League. Mary's faith was important to her and in her lifetime she attended United Methodist Churches in Bangor, Maine; Churdan, Iowa; and Gansevoort.

Mary attended Ireton public schools from 1924 to 1931. She attended Ireton High School from 1931 to 1935 and graduated a year early as valedictorian of her class. During the Great Depression, Mary was the sole state-wide recipient of a full college scholarship from the DAR (Daughters of the American Revolution). Mary's DAR lineage is traced to her maternal great-grandmother, Rebecca Ely Keen.

She attended Iowa State Teacher's College in Cedar Falls, Iowa. At college, Mary supervised student teaching of Latin and literature and she worked in the library. She was a sergeant-at-arms in the professional English fraternity Sigma Tau Delta, the Business Manager of the Purple Pen, and editor of the Wesleyan. Mary was a member of the student council and several clubs, and she sang in several choirs.

Mary graduated with a bachelor of arts degree in 1939, with a major in English and minors in Latin and speech. She attended her 50th reunion in 1989. She obtained her teacher's certificate in Iowa in 1939 and she taught high school for three years in the district of Hudson, Black Hawk County, Iowa from 1939 to 1941.

In the fall of 1941 Mary pursued her master's degree at Northwestern University near Chicago, Illinois until the United States was drawn into World War II in the Pacific by the attack on Pearl Harbor in December 1941.

Mary was part of the greatest generation. On Oct 1, 1942 Mary graduated from the CAA (Civil Aeronautics Administration) in Kansas City, Missouri, as an aircraft communicator. Mary received steady promotions and a letter of commendation for her excellent work. She communicated critical information, sometimes by Morse code, to B-17 and B-29 flyboys and their crews, and supported their efforts to win the war in Europe and the Pacific. She worked in radio control towers on base in Philip, South Dakota; Casper, Wyoming; Tarkio, Missouri; Grand Island, Nebraska; and Wichita, Kansas. She completed link training in Grand Island. Mary was adventurous and she traveled by train or in her 1941 Ford across the United States several times. Mary told wonderful stories of those days; including one of her flying with the base mailman in an open cockpit plane — upside down — over Grand Island, much to the concern of her landlady, Mrs. Livingston. Mary enjoyed seeing the B-29 FiFi this summer in Albany, New York and it brought back a flood of happy memories.

In 1944 Mary met a B-29 First Lieutenant in the Air Corps, William (Bill) Jinks, and after a whirlwind courtship, she married the love of her life in Grand Island, Nebraska on June 3, 1945. They honeymooned in New York City upon Bill's return from Guam in the fall of 1945. She enjoyed seeing Duke Ellington play at the Café Zanzibar.

After the war Mary and Bill pursued their lifelong dream of farming and they established a poultry and dairy farm in Bill's home state of Maine where they farmed very successfully in Bangor, Maine until 1988. Mary was recognized by the University of Maine for her contribution in supporting her husband during his pursuit of his post-war college degree in agriculture. Mary and Bill moved to Mary's home state of Iowa where they cultivated corn and soybeans in Churdan, Iowa for another 28 years. Mary and Bill were blessed with being able to farm; it was their lifelong dream and what they absolutely loved to do. Mary's work ethic was strong; she was involved in every aspect and she worked tirelessly along-side her husband into her 90s.

Over her lifetime Mary gave generously to neighboring families in need, charities and organizations. Mary was a lady. She enjoyed fashion and could sew or knit anything. She loved the arts, loved to dance and was a gifted pianist. She had a green thumb and loved to work in her gardens. She was a wonderful baker and her pies will be missed. She was an avid reader and never lost her love of learning.

In a card to her daughter in 2013 Mary wrote “Work like you don't need the money. Love like you've never been hurt. Dance like nobody's watching. Sing like nobody's listening. Live like its Heaven on Earth.” Mary was a beloved wife, wonderful mother, and best friend. She will be so greatly missed by the people whose lives she touched. There is none sweeter, more loving, generous, humble, selfless to the point of depravation, intelligent, independent, and funny.

Mary was proud of the fact that she was the oldest living member of her generation in her family. She was a descendent on her paternal side of a Dutch colonist, Anneke Jans. On her birthday in 2015, Mary visited Anneke's grave in Albany.

Mary's daughter Patti would like to express her deepest appreciation and heartfelt thanks to Mary's special caretakers Tonia and Dee; Mary's special friend Terri; Pastor Paul and the congregation of the Fortsville United Methodist Church; and Mary's doctors, their staffs, and hospice for their compassionate care.

There were no calling hours and services were private. Mary was interred next to her husband, Bill, at the Maine Veterans Memorial Cemetery, Mount Vernon Road, Augusta, Maine.

In lieu of flowers, expressions of sympathy may take the form of donations in Mary's honor to the Fortsville United Methodist Church, 402 Fortsville Road, Gansevoort, New York 12831 or to a charity or organization of one's choice.

Thank you to whoever wrote her obit and may she rest in peace. What an incredible life.

Don't buy these items at the dollar store

Don't buy these items at the dollar store

Easy TikTok tips that will make your perfume last longer

Easy TikTok tips that will make your perfume last longer