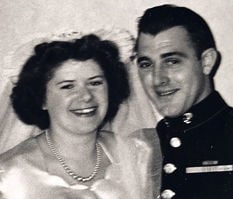 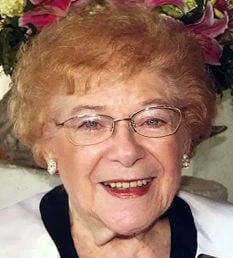 LAKE GEORGE — Elizabeth “Betty” O’Connor, 96, a resident of Lake George, passed away peacefully in the arms of Jesus, surrounded by her daughter, Irene and granddaughter, Sarah, Tuesday, Nov. 6, 2018.

Betty was an amazing wife and mother. One of the most important lessons she carried with her throughout her life was the love and trust she had in God and in her family. Betty was full of life and vitality. She believed, “if you don’t have anything nice to say about somebody, don’t say anything at all!”

She was born Aug. 13, 1922 in Brooklyn, the daughter of Martha (Kelly) and William Decker.

Betty was a communicant of Sacred Heart Church, an active participant in Sacred Heart’s Food Pantry, and served on the Diocesan Development Program.

Betty was a graduate of East Rockaway High School on Long Island and of the Delehanty School of Business. During World War II, she served as a civilian with the Army Air Warning System, top-secret work for the United States Army. On April 15, 1945, she married James “Jim” O’Connor. Betty and Jim were married 69 years prior to Jim’s death in 2015.

Prior to moving to Lake George in 1968, Betty, Jim, and their daughters, Irene and Elizabeth, lived in Oceanside. Betty was a championship bowler, and excellent amateur artist, a Red Cross Volunteer, a Girl Scout Leader and a fundraiser for the Multiple Sclerosis Society. She was also the vice president of O’Connor Fuel Oil Company. Once she moved to Lake George, she still continued league bowling, painting and became very active in the Business & Professional Women’s (BPW) Club in Lake George. She served as their president for three years and eventually Betty was elected president of NYS BPW. Betty was also a member of Soroptimist International, and ran, as an Independent for Lake George Town Supervisor.

After 20 years of being in business on Long Island, Betty and Jim knew it was time for a change. Betty shared Jim’s vision of creating a new life for their family in Lake George, and together, they moved heaven and earth to make the dream a reality. They bought property on Lake George in 1968 and celebrated their first season at O’Connor’s Cottages in 1969. In May of 2019, O’Connor’s Resort Cottages will be celebrating its 50th year in business!

In addition to her parents, she was predeceased by her brother, William Decker and his wife, Burnette; her son-in-law, Gary Filippelli; her brother-in-law, Jack Keane; and her sister-in-law, Gail Decker.

The family would like to express their gratitude and a special thank you to Dr. Bryan Smead, for his dedication, thoughtfulness and loving care, Betty’s wonderful home care aides, and the love and support of Sacred Heart Parish community.

Mass cards for Betty’s soul will be gratefully received. Memorial donations, in lieu of flowers, may be made to the Alzheimer’s Association, the Multiple Sclerosis Society, Sacred Heart Church in Lake George and/or St. Mary’s-St. Alphonsus Regional Catholic School in Glens Falls.

Arrangements are under the care of Regan Denny Stafford Funeral Home, 53 Quaker Road, Queensbury and those who wish may make online condolences by visiting sbfuneralhome.com.

To plant a tree in memory of Elizabeth O'Connor as a living tribute, please visit Tribute Store.