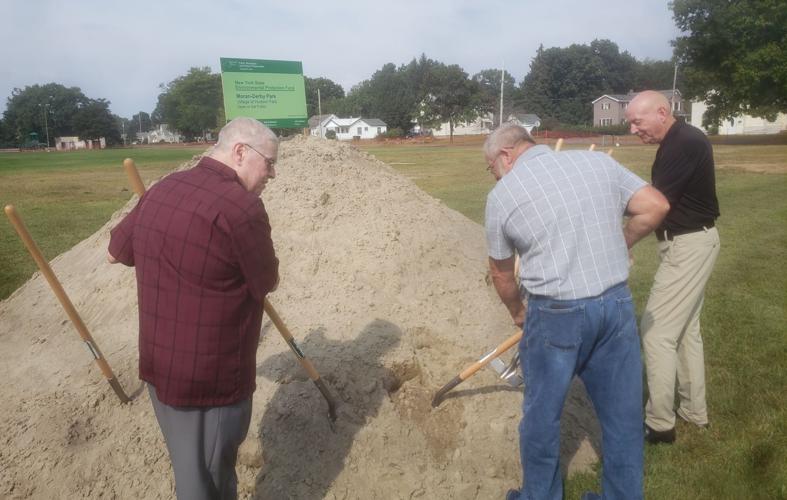 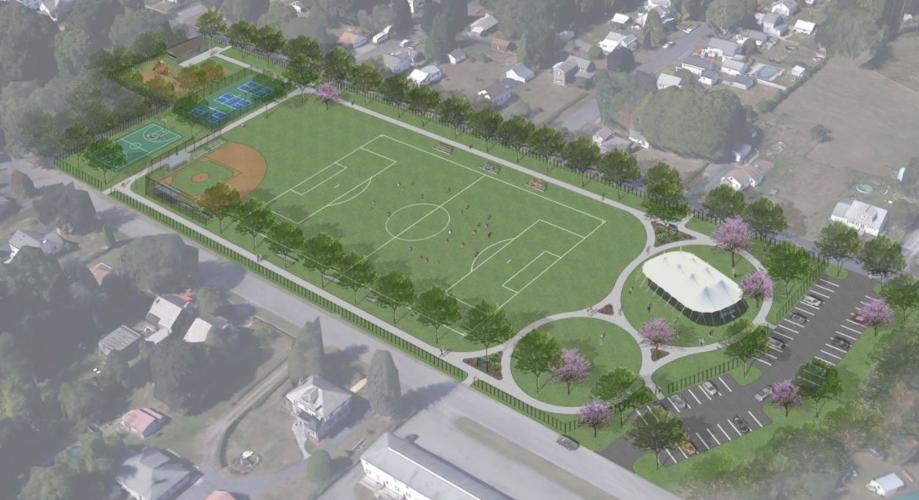 A rendering of a revamped Derby Park is seen. A groundbreaking ceremony for the restoration of the village-owned park was held Wednesday. 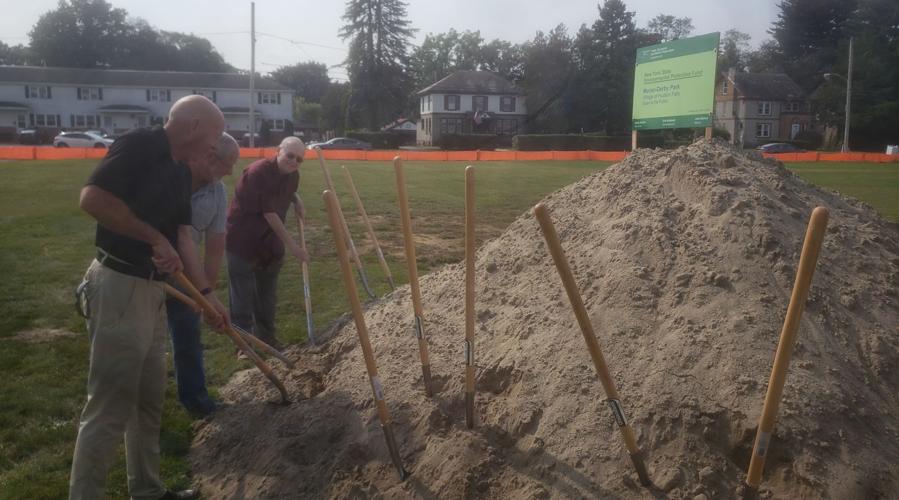 HUDSON FALLS — If the weather cooperates, residents in Hudson Falls will be grateful for a revitalized Derby Park by Thanksgiving.

Construction is starting on a $1.8 million project to add a new regulation soccer field and three pickleball courts, refurbish the basketball court and install new lights and event spaces. In addition, the clubhouse will be renovated and a new parking lot installed.

Village Board member Mike Horrigan said construction could be substantially completed in November. Any remaining work would be wrapped up in the spring of 2022.

The facility is being renamed Moran-Derby Park after a $500,000 donation by brothers Brien and Mike Moran, who ran a local sporting goods store for more than 40 years.

A ceremonial groundbreaking was held on Wednesday.

Horrigan grew up three blocks from the park.

“We pretty much spent every day of our lives here,” he said.

Horrigan said the Derby Park Foundation’s goal is to “reinvent and revitalize” the park. Once bustling with youth sports activities, it had stayed dormant in recent years as the sports landscape changed and high school sports practiced indoors in the summertime.

He said he hopes that new areas, including the soccer field, pickleball courts and the refurbished basketball court, will get people back to the park.

Horrigan said organizers are hoping that local high schools will want to host games there.

In addition to sports, he said it will be a community center.

“We can have concerts, events, garage sales and possibly through the wintertime, we’ll turn those event centers into skating rinks,” he said.

The cost of the project had been originally pegged at $1.2 million but it has increased to $1.8 million because of the pandemic’s disruption to the supply chain and increased costs of materials.

The Derby Park Foundation also has received a $600,000 grant from the state Office of Parks, Recreation and Historic Preservation as well as over $400,000 in donations from the Sandy Hill Foundation, Wheelabrator, Boralex and community residents.

Village Mayor John Barton said he thinks the refurbished park is going to be a focal point for village residents.

“Give them a place that they want to come to and enjoy it and really appreciate the fruits of the labor of a lot of people,” he said.

Mike Moran said he and his brother wanted to get involved because the park was in such disarray. He also hoped that the renovated park would also revitalize the community.

“It’s going to be great for the village and my biggest thing is it’s going to bring people to stay and actually say, ‘I live in Hudson Falls. I’m proud of it,’” he said.

The not-for-profit Derby Park Foundation will host a groundbreaking ceremony on Wednesday, marking the official start of the $1.8 million transformation of the aging and once immensely popular park into the revamped Moran-Derby Park community athletic complex and festival space.

A rendering of a revamped Derby Park is seen. A groundbreaking ceremony for the restoration of the village-owned park was held Wednesday.