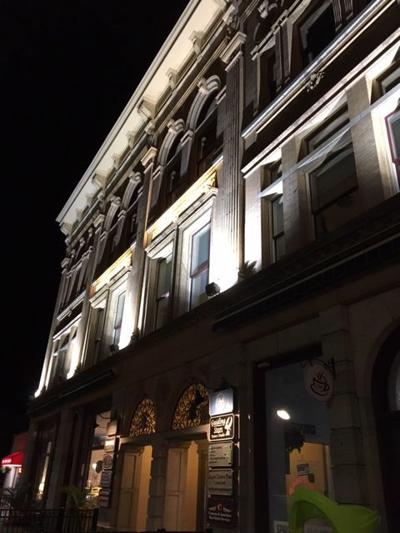 South Street is looking good – at least the northern end.

Once the honky-tonk heart and soul of downtown Glens Falls – known as the Street of Dreams in those days – South Street has slowly been evolving.

The new restaurant “Craft on 9” has added another dimension to what the future holds for the South Street corridor. Previously, the site of the “Mikado” before it moved up the other side of Glen Street, “Craft on 9” has an entirely different look than anything we have seen before on South Street, both inside and out.

We had some friends visiting this weekend and a stroll around downtown and the whole city seemed alive with the rodeo going on at the arena.

What especially stuck out to me, besides the new restaurant, was the lighting on Glens Falls National Bank and the Empire Theater building across the street.

I never noticed the lighting on the “Empire Theater” signage before. What an awesome looking building and a great way to highlight a piece of Glens Falls history. Its look alone practically invites you on to South Street.

In my office, I have an old 1920s photo that shows the Empire Theater marquee.

With the demolition of the OTB and a couple other buildings under way at the other end of South Street where the farmer’s market complex is planned, things are looking up for this entrance to the city.

COMMENTARY: It's not what the kids have, but what they need

Another small school seems set against a merger that might provide more opportunities for a well-rounded education for their children.

FROM THE EDITOR: You don't lose your right to free speech when you go to work

Far too often these days, reporters are told by sources that their employer will not allow them to talk to anyone at the newspaper.

They are told to direct reporters to a public relations professional or a spokesperson to handle questions.

It’s the time of year when local citizens ask the important question: “So who do I have to vote for this year.”

Sixty people turned out Tuesday to comment on the Glens Falls Common Council's proposals regarding political demonstrations in the city. Nineteen people spoke during a hearing that sometimes reflected the actions of students in a junior high food fight.

BLOG: Newspaper called out during meeting, too

Lots of people attacked The Post-Star at the Common Council meeting Tuesday night, but their complaints were not based in fact.

BLOG: Media, consumers both to blame for fake news

Ken Tingley will be talking with Mary Miller about her program to combat fake news in his Sunday column. Here is short outtake on what Miller is doing and what she sees in the media landscape.