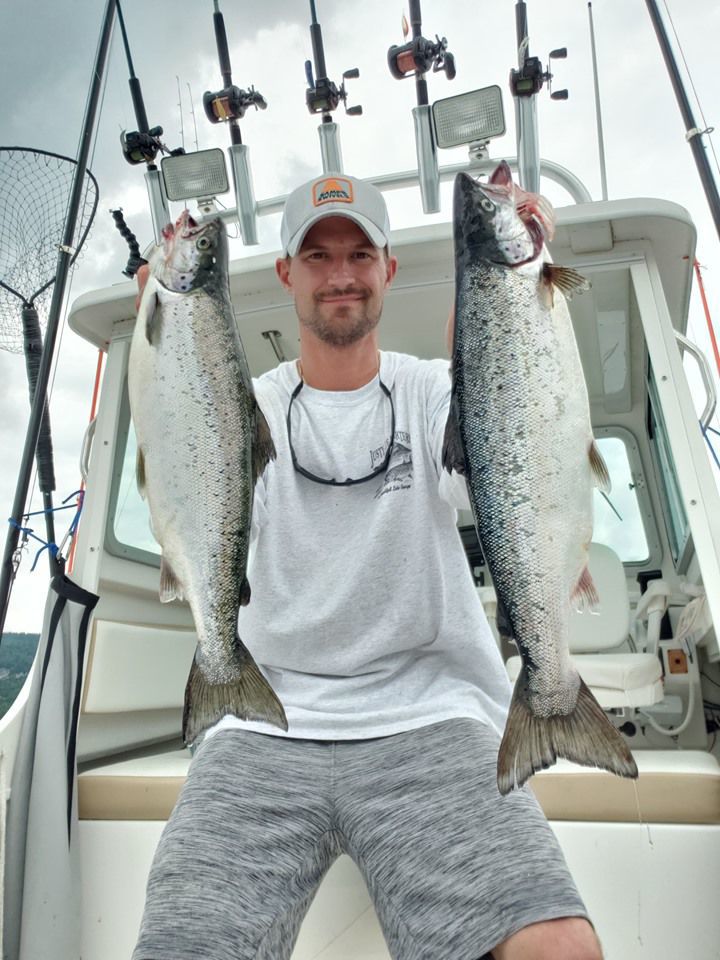 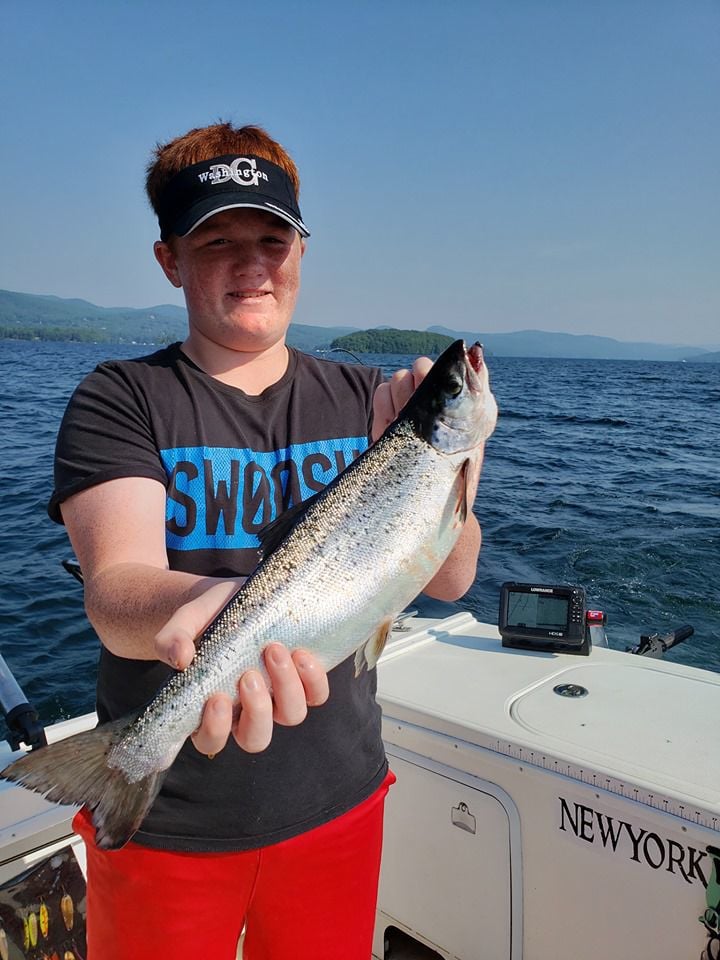 A young man with a nice landlocked Atlantic salmon caught on Lake George earlier this year. Salmon fishing has picked up on the lake.

Joe Greco has been offering charter fishing trips on Lake George for nearly three decades, so he has a solid perspective on the ups and downs of the lake's fishery.

So when he says the lake's landlocked Atlantic salmon fishery is much improved these days, he is speaking from experience. And the pictures of the silvery footballs his anglers have landed bear out that sentiment.

The lake's salmon fishery saw an unexplained downturn over the past 10 to 15 years, which prompted the state Department of Environmental Conservation to try stocking of a strain of fish from Maine instead of the domestic strain that had been raised in state hatcheries for decades.

Salmon don't naturally reproduce in the lake because of a lack of suitable spawning tributaries, so the fish that are caught are stocked fish.

That new strain, from Sebago Lake in Maine, was introduced about 5 years ago, and has definitely fared better than its predecessor, according to the anglers who target them.

Greco, owner of Justy Joe Charters, said his salmon catch rate has increased the past few years, and he expects this year will top the 200 or so boated last year. That's not the 400 or so a year that were landed in the 1990s, but the salmon being seen now are much bigger.

Most are keepers that are 18 inches or longer, compared to only 10 to 20 percent of those being landed back in the 1990s passing that mark.

"We don't get them every day. We still don't have the numbers we used to," he said. "But the size is 100 percent better."

A six-pounder was the biggest that one of his clients ran into this year so far. A 6.77-pound salmon won last year's King George Fishing Derby, eight pounders are landed each spring and summer now and a 15-pounder was caught through the ice in February 2016.

He said salmon fishing has definitely been better in the lake's North Basin than the South Basin, though his son, Joey, who also captains a boat, has had some recent luck finding some decent landlocks near Dome Island.

Marc Mularz, owner of Beach Road Bait & Tackle in Lake George, said his customers reported very good salmon fishing on the lake this spring, with a bit of a slowdown during the warmer months. Salmon are coldwater fish, and move into the depths when surface water warms.

He said some of his regulars have caught landlocks in the 26- to 28-inch range, and the Sebago Lake strain has thrived compared to the Little Clear Lake strain the DEC used for decades.

"The Sebago Lake strain definitely seems to be doing better," he said.

Fish from the new strain, though, seem to behave differently than the former strain, so finding them in the warmer months has been tougher, Mularz explained.

The change to stocking some salmon in the fall, when they are bigger, has also probably helped survival rates, Mularz added.

LAKE GEORGE | Jeff Lawrence has been fishing area lakes for salmon for decades, and he knows the feeling of a big landlock on the end of his line.

As in many lakes in the Northeast, the Atlantic salmon in Lake Champlain are considered landlocked, not able to leave to get to the sea or spa…

A young man with a nice landlocked Atlantic salmon caught on Lake George earlier this year. Salmon fishing has picked up on the lake.