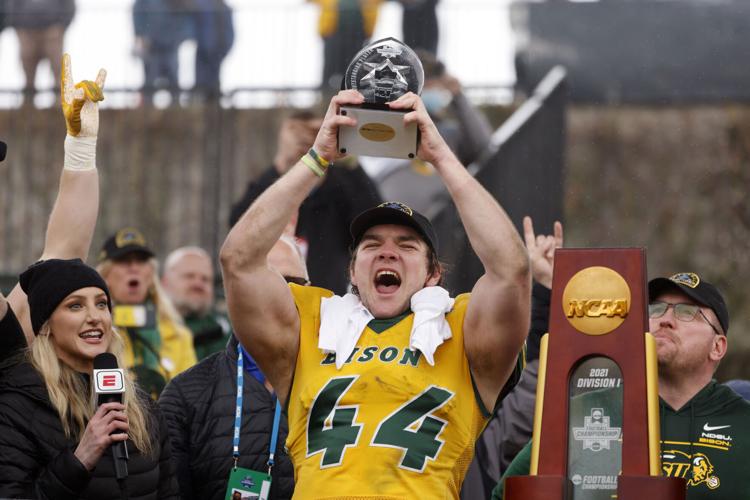 North Dakota State fullback Hunter Luepke celebrates with his most valuable player award after the FCS Championship game against Montana State, in Frisco, Texas, in this  Saturday, Jan. 8, 2022, file photo. 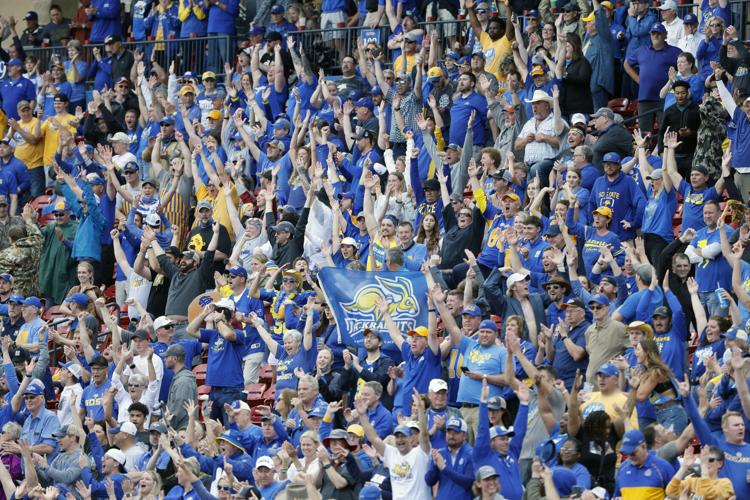 South Dakota State fans cheer as they play Sam Houston State during the second half of the 2021 FCS Football Championship in Frisco, Texas on Sunday, May 16, 2021.

FRISCO, Texas — North Dakota State and South Dakota State are used to playing each other in a rivalry that dates back 120 years. On Sunday, nearly 1,000 miles from the border between their states, they face off in the Football Championship Subdivision national title game for the first time.

"It's not the rivalry game. It's not the Dakota Marker game, which has a life of its own," said South Dakota State coach John Stiegelmeier, who is in his 26th season at his alma mater. "Obviously in Frisco, Texas, you're playing for the prize,"

The Dakota Marker he speaks of is a 75-pound trophy for the regular-season meetings between the Missouri Valley Football Conference rivals, an award established in 2004 when both teams moved to the Division I level together. South Dakota State won the last three of those.

North Dakota State (12-2), the reigning national champion, has won a record nine FCS title trophies — winning all nine times the Bison made the trip from Fargo to Frisco the last 11 seasons. Standout fullback Hunter Luepke, going into his final game for the Bison, ran for three touchdowns last January in their 38-10 win over Montana State.

Top-seeded South Dakota State (13-1) made its only title game appearance in an unusual spring finale two seasons ago, one of the rare misses by the Bison. Isaiah Davis, who has 1,348 yards rushing with eight 100-yard games this season, ran for three TDs for the Jackrabbits in that game, which Sam Houston State won with a last-minute touchdown.

The Jackrabbits beat their conference border-state rival 23-21 in mid-October, after overcoming a 21-7 halftime deficit. Their three consecutive wins in the series account for half of NDSU coach Matt Entz's six losses in the four seasons since his promotion from defensive coordinator when Chris Klieman left the Bison for Kansas State.

"It's between us and them. You could play in a gravel yard, and I think it's going to be a really, really good game and everyone's going to be doing everything they need to be, playing hard and finishing everything," NDSU tight end Joe Stoffel said. "The national championship is a step-up, it's a bigger stage."

North Dakota State has a seven-game winning streak since that loss to South Dakota State. The Jackrabbits have won 13 in a row since losing their season opener 7-3 at Iowa, which marked quarterback Mark Gronowski's first game since tearing his ACL on the opening series of the FCS title game two springs ago.

The 114th meeting between the rivals will be only the fifth in the playoffs. All four previous postseason games were in Fargo, with North Dakota State winning all of them — in 2012, 2014, 2016 and 2018. The last one was a national semifinal.

Gronowski has progressively gotten more involved in the run game in his comeback from the torn ACL. He has 351 yards and 11 TDs rushing, with seven of those scores in the last seven games — and one in each of the Jackrabbits' three playoff games. He has completed 65.1% of his passes (218 of 335) for 2,744 yards with 23 TDs and five interceptions.

South Dakota State's previous appearance in Frisco came during the pandemic-affected 2020 season that was played the following spring. That game began in a pouring rain, had a 75-minute lightning delay before halftime and ended soon after the sun popped through the clouds.

The forecast for Sunday calls for sunny conditions all day, with temperatures reaching the low 60s.

How to see 'Justified' revival

Q: Do you have info on the potential revival of the TV show “Justified” and when and where it might be available for viewing?

Living With Children: The problem with self-esteem-centered parenting

When America’s mental health industry sees the opportunity to broaden its influence, it pounces. Such is the story of trichotillomania, which …

North Dakota State fullback Hunter Luepke celebrates with his most valuable player award after the FCS Championship game against Montana State, in Frisco, Texas, in this  Saturday, Jan. 8, 2022, file photo.

South Dakota State fans cheer as they play Sam Houston State during the second half of the 2021 FCS Football Championship in Frisco, Texas on Sunday, May 16, 2021.