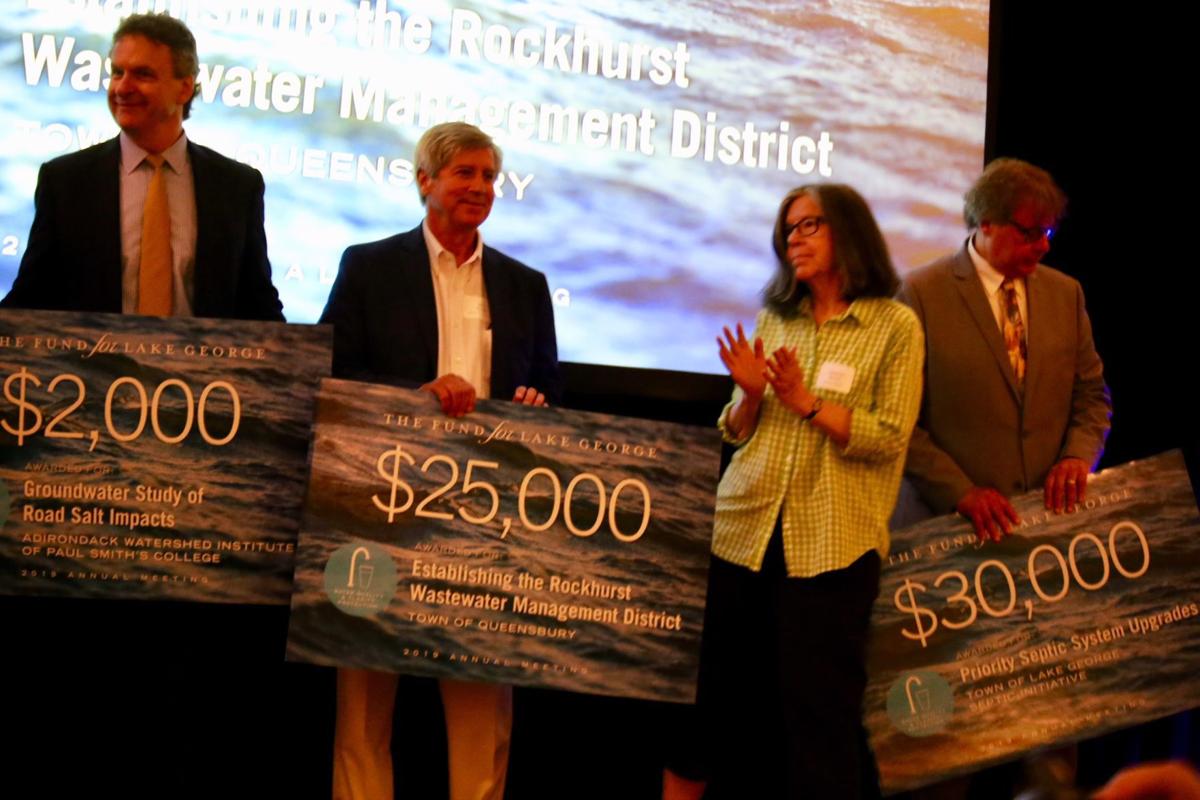 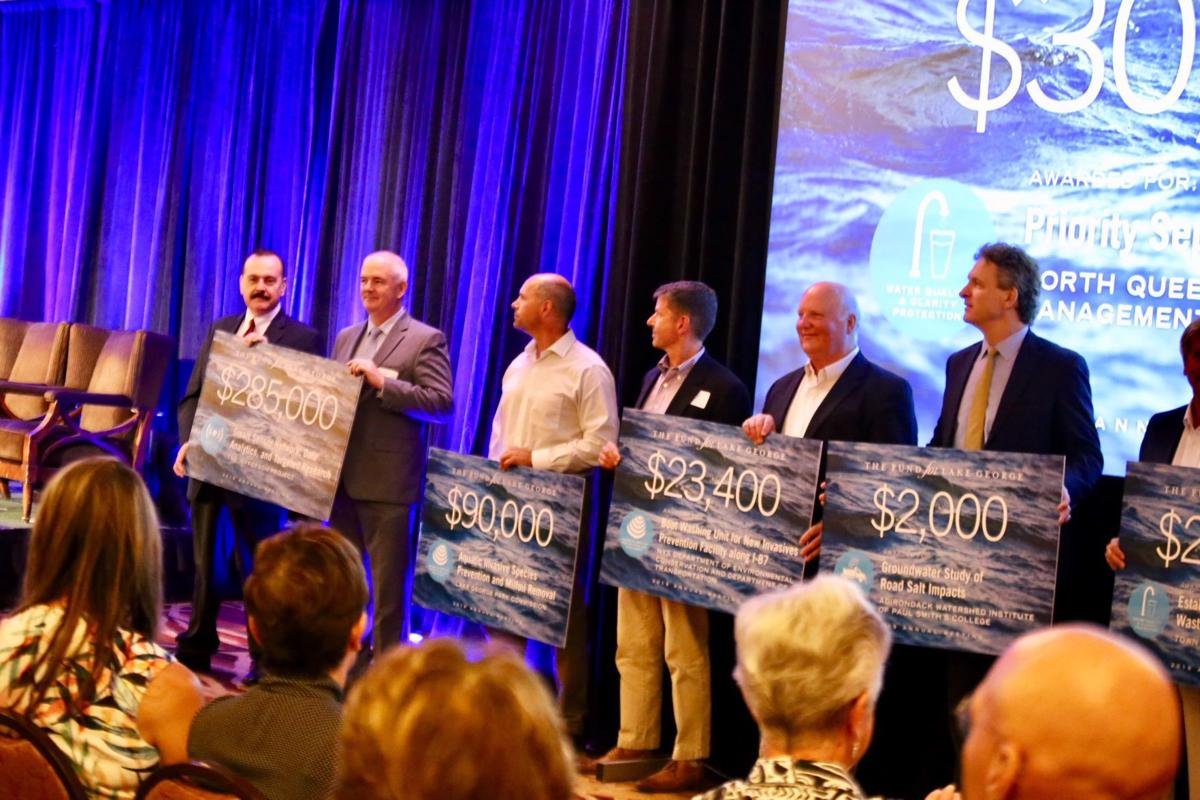 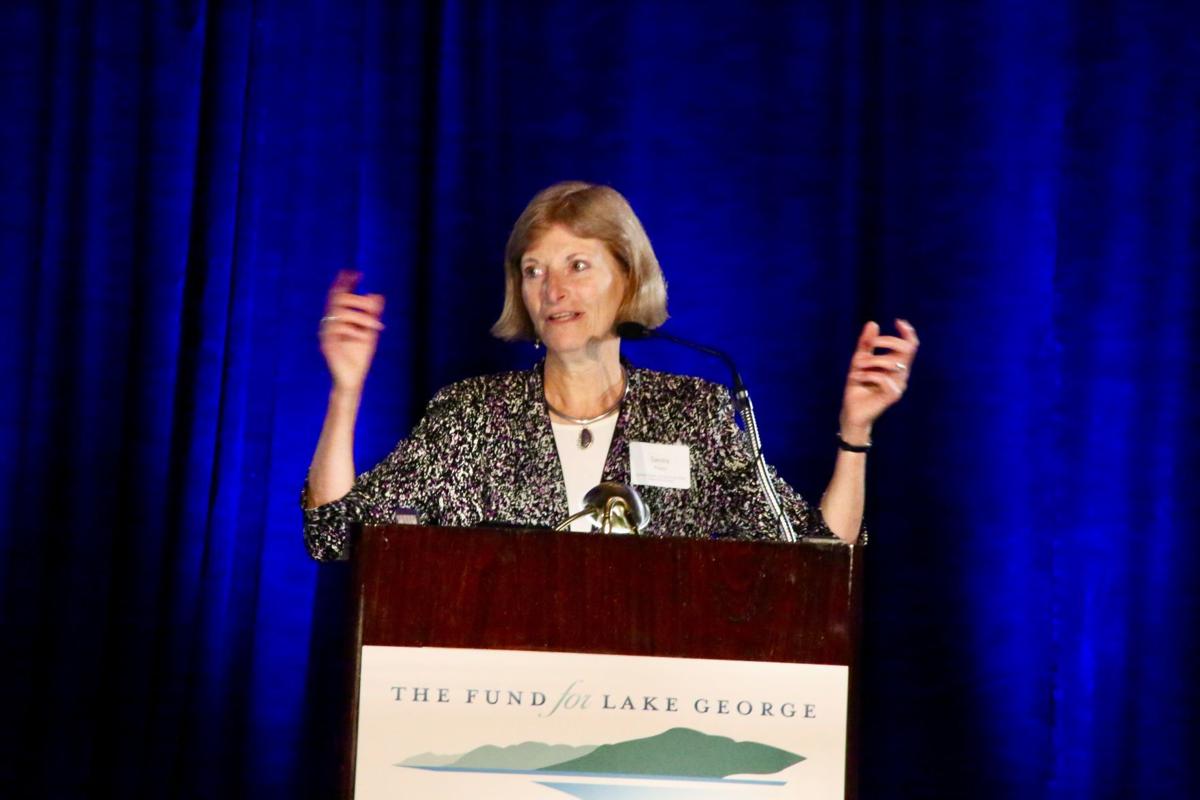 Sandra Postel, keynote speaker at The Fund for Lake George’s annual meeting, discusses the importance of freshwater Saturday at The Sagamore Resort Conference Center in Bolton. 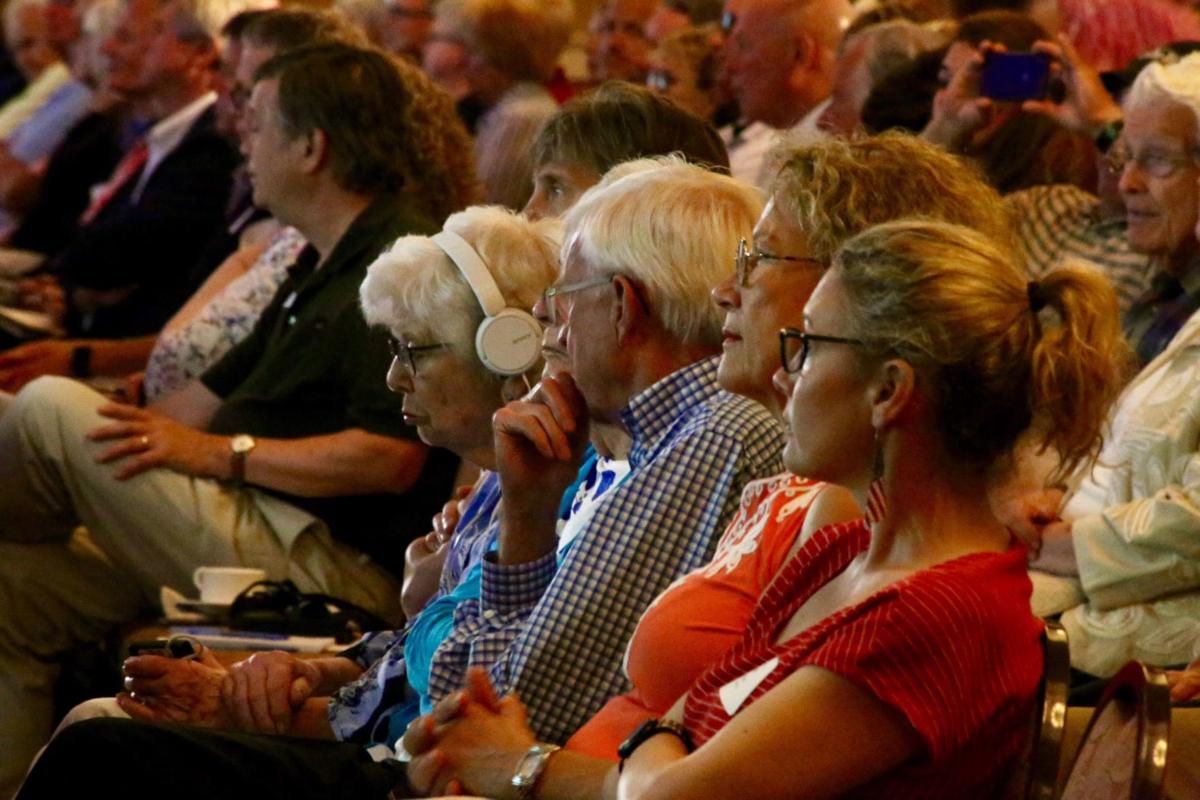 Postel, who is an expert on freshwater systems across the globe, was The Fund for Lake George’s keynote speaker Saturday during the organization’s annual meeting. While Lake George is one of the cleanest in the country and the world, Postel said that’s not something people should take for granted.

Water that is both fresh and accessible accounts for less than 1% of the water on Earth, she said, and with a myriad of threats from climate change, to invasive species, to harmful algal blooms, protecting drinking water sources is more important than ever.

Historically, invasive species and road salt have been of primary concern for Lake George. The Fund is focusing some of its investment and research efforts now to harmful algal blooms and climate change.

The Jefferson Project, a mapping and monitoring system created by The Fund, IBM and Rensselaer Polytechnic Institute, is now directing its sensor technology to study how and why toxic blooms are occurring in New York. Last year, a sensor platform was deployed on Skaneateles Lake in Onondaga County, a sister lake to Lake George that has suffered from harmful algal blooms.

John Kelly, executive vice president of IBM, said the sensor platform was deployed just days before Skaneateles Lake’s first bloom of the 2018 summer. The sensors on the platform measure things like water temperature, Ph, the movement of the water, nutrient levels, and Kelly said he believes the nutrients that fed that bloom were from the bottom of the lake.

While Lake George has not, in recorded history, had a harmful algal bloom, it is something on lake advocates’ minds as waters warm and storms strengthen, some of the indicators of climate change. Toxic blooms generally need nutrients to eat, which can be provided through stormwater runoff after heavy rains, and warm, sunny days to photosynthesize.

“The risk is real,” said Eric Siy, executive director of The Fund, of having a toxic bloom on Lake George.

Lake George is one of 12 lakes in New York State that is part of a harmful algal bloom study. Lake George is considered a “control” lake, since it has not had a bloom.

As part of the study, the state created action plans for each lake. Lake George’s action plan includes several projects, including the installation of a woodchip bioreactor at the town of Bolton’s wastewater treatment plant. With money from both the state and The Fund, the equipment was installed last year, and Waterkeeper Chris Navitsky said it has been successful in reducing nutrients called nitrates into Lake George.

The Fund is also working with local municipalities, including the town of Lake George, to map its septic systems in the watershed and identify which ones may need upgrading.

A challenge still ahead is getting a new $24 million wastewater treatment plant for the village of Lake George.

All are projects that aim to keep nutrients out of the lake, which could prevent Lake George from ever having a toxic algal bloom.

Kelly said the next step for the Jefferson Project is to study the impact climate change is having on Lake George. For example, he said, Lake George has had fewer years of complete ice-in.

Since 1990, Lake George has had 11 years it did not completely ice over, according to the Lake George Association’s records.

“I believe we will win the battles for the water purity of this lake,” Kelly said.

He was not sure about the war, however, referring to climate change, and what it could do to Lake George in the future decades.

The Fund presented nearly $500,000 in grant funding, too, on Saturday for projects that will help protect Lake George’s water quality. It has invested more than $7 million in specific lake protection projects since 2013.

Jeff Killeen, chairman of The Fund for Lake George’s board of directors, said The Fund is working to raise $10 million for its protection fund for the lake by the end of next year. So far it has raised over $6 million.

To learn more, go to https://fundforlakegeorge.org/.

Costs to be determined for Rockhurst sewer on Lake George peninsula

The Queensbury Town Board will pay for an engineering report to find the exact sewer cost for each property owner along the Rockhurst peninsula on Lake George.

A new mapping analysis shows 56% of the trails in the Adirondack Park’s central High Peaks Wilderness Area are too steep and eroding away.

LAKE GEORGE — The Village Board on Monday awarded bids for the new wastewater treatment plant, giving the go-ahead for construction to start o…

The state is investing about $2.8 million to combat invasive species, with nearly $190,000 of that going toward the Capital Region.

Annual meeting set for The Fund for Lake George

BOLTON — Harmful algal blooms, road salt, invasive species, public and private projects and other water quality topics will be covered at The …

LAKE GEORGE — Town officials are balking at the price tag for the village’s $24 million wastewater treatment plant, but time is running out as…

International Paper in Ticonderoga has received $2.8 million and recognition from the state for its work to reduce its carbon footprint.

Researchers will be studying how road salt and excess nutrients impact Lake George using a controlled, in-lake experiment this summer.

QUEENSBURY — The long effort to get sewer added on a narrow peninsula of Lake George is hitting huge hurdles.

The Adirondack Park is getting a boost in protections against invasive species, which not only helps the environment but protects its tourism economy.

Sandra Postel, keynote speaker at The Fund for Lake George’s annual meeting, discusses the importance of freshwater Saturday at The Sagamore Resort Conference Center in Bolton.